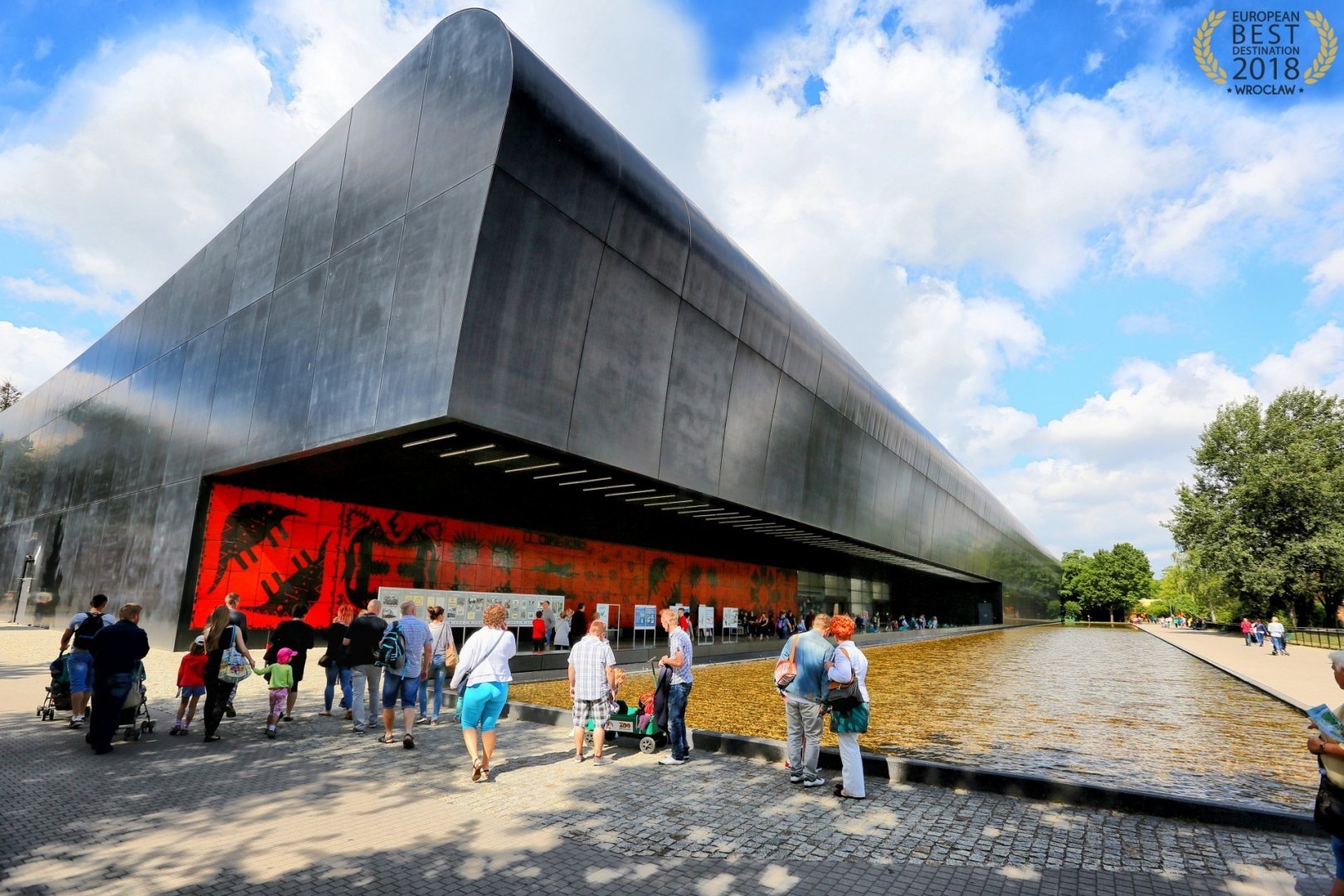 Africarium is a part of Wrocław zoo. It was opened in 2014. It is the first oceanarium in Poland and the only one in the world that is devoted to fauna and flora of only one continent. The name of the unit came from coinage of two words Africa and aquarium giving a huge insight into what the whole enterprise is about. Giving some basic numbers, Africarium has 15 000 000 litres of water, there are 21 pools and aquariums where visitors can admire over 350 species of fish. The place on average is visited by 2.5 thousand of people a day. People can admire here for example turtles, tortoises, fish, manats, hippopotamuses, patoideas, sharks, penguins, crocodiles and many other species from Africa. The most interesting moments are feeding shows. It is good to check the exact hours before the visit to be at a good place at a right time. An entrance ticket allows you to see not only Africarium complex but also the whole Wrocław zoo. Sightseeing of Africarium takes about 1.5 to 2 h but if you have more time, you can sped entire day in the whole zoo complex.

A Piece of Africa in the middle of Wrocław - Afrycarium Wrocław

Africarium is the only one oceanarium in the world devoted to the flora and fauna of Africa. On average, they are visited by 2.5 thousand people a day.

Africarium is the biggest attraction of the Wrocław zoo. The originator and author of all the venture concepts was Radosław Ratajszczak. The name “Afrycarium” was created from the combination of the words Africa and aquarium. The construction of the Africarium started towards the end of March 2012, and was completed in October 2014. The building was designed by Mariusz Szlachcic and Dorota Szlachcic, and the general contractor of the facility was the Wrocław-based company PB Inter-System S.A.

The Africarium building is 160 m long, 54 m wide and 15-12 m high. It was built on a plot of almost 1.9 ha, and the total volume of the building is over 184,000 m³. The colour of the facade is black - it alludes to the character of the Dark Continent. The Africarium has three floors, one of which is underground. The usable area of the pavilion is nearly 9,000 m², the service area is approximately 7,000 m², and the outdoor exhibitions cover an area of nearly 7,500 m². The entire complex has 19 aquariums, pools and tanks with a total area of 4.6 thousand square meters and a capacity of over 15 million liters of water, purified by 50 filters.

The main theme of the entire Africarium is the presentation of various ecosystems related to the aquatic environment of the Black Continent, under the general slogan "life-giving waters of Africa"!

The tour starts on the beaches of the Red Sea. The reservoir with a capacity of one million liters of water has created a coral reef ecosystem, where you can admire more than 60 species of beautiful, colorful fish. Then you will move to East Africa. Here you will meet Nile hippos and animals inhabiting the savannah, such as hyraxes (distant relatives of elephants), aardvarks (often mistaken for American anteaters), and dik-diks (one of the smallest antelopes). Next you leave East Africa passing under the 8-meter-high waterfall and descend deep into the Mozambique Channel. Its biggest attraction is the 18-meter-long transparent acrylic tunnel. The tunnel is divided into three parts - the first one with a sloping floor leads us to the most attractive central part, suspended in the water, with a glass floor and a tunnel with 360-degree exposure! Sharks, giant rays, green turtles and various species of fish swim underneath it. From the depths of the Mozambique Channel, you walk towards the shipwreck, to the Skeleton Coast in Namibia. The inhabitants of this zone are South African fur seals (often mistaken for seals) and African penguins, as well as jellyfish, moray eels and interesting fish species such as lionfish. The last land we visit will be the Congo Rainforest. The temperature here reaches 30ºC and the humidity is 60%. The jungle that surrounds the Congo River is home to crocodiles and docile manatees - unusual, herbivorous mammals also known as mermaids. Many species of birds have joined them. From here, we go to the observation deck - observing animals and lush vegetation from above, and then, through the African souvenir shop, you leave the building admiring the Centennial Hall, towering over the surroundings.

Africarium is located in Wroclaw, at 1 - 5 Wróblewskiego Street. Is open all year round with no exceptions, seven days a week, every day of the year, including Sundays and holidays. The ticket entitles you to visit the zoo as well as the Africarium. Visiting the Africarium takes about 1.5 -2 hours. Visiting the entire zoo, including the Africarium, takes approximately 5-6 hours. In the immediate vicinity of ZOO Wrocław, there is a 24-hour, paid car park with over 800 spaces, including 20 spaces for coaches. The ZOO can be reached from the car park by a footbridge over Wróblewskiego Street. The car park is located at Hala Stulecia, entrance from Mikołaja Kopernika Street.