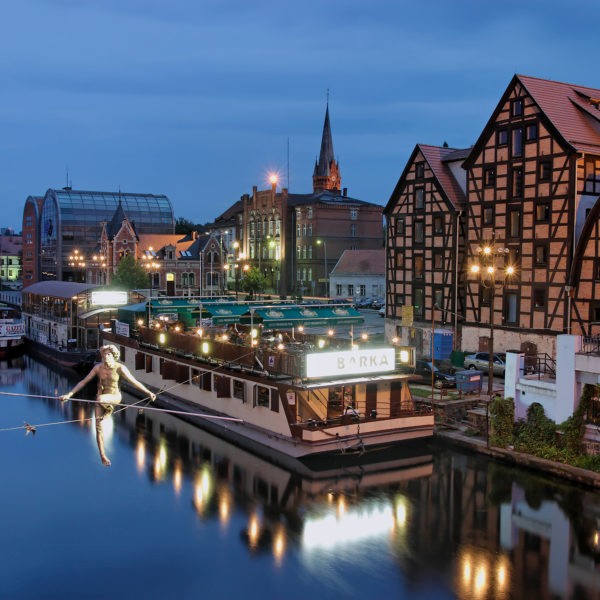 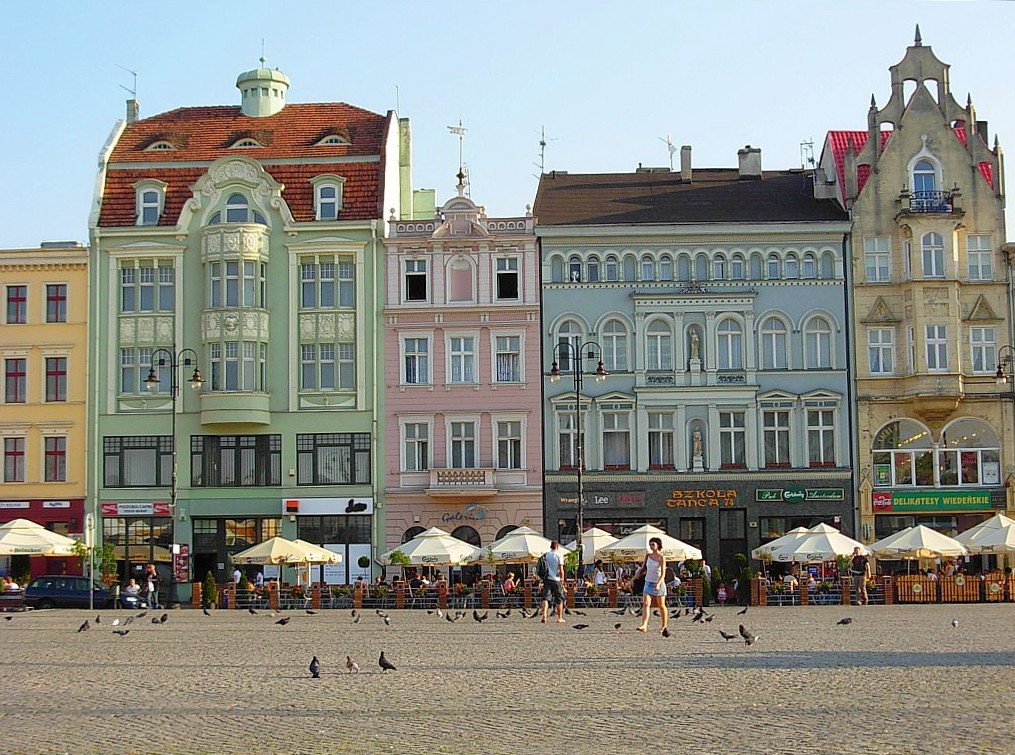 In the last few years the city of Bydgoszcz has become much more beautiful and more attractive for tourists. The visitors enjoy the most the Water Mill Island (island of museums: White Granary Museum, European Money Center and Modern Art Gallery) with the historic Old Market Square and tight rope monument of a man crossing Brda river. They often also visit Casmir the Great Monument, Nova Opera House, Soap and Dirt History Museum, Exploseum Museum, Waterworks Museum, Myślęcinek leisure complex with the botanic garden, zoo, plastic dinosaurs collection and amusement park; Bydgoszcz canal with tidelocks, the Deluge fountain and dancing fountain by Bydgoszcz philharmonics, St. Vincent a Paulo’s Basilica and many other monuments and recently renovated colorful, old tenement houses. Słonecznik boat cruises are also very popular in summer season (cruises in modern boats which use only sun power), as they give opportunity to see the city from the river perspective. Recently, Bydgoszcz has really changed its face and is worth visiting.

Bydgoszcz is one of the largest cities in Poland. It is located in the north of the country in the Kuyavian-Pomeranian Voivodeship. Bydgoszcz is getting more beautiful from season to season - more monuments are renovated and new cultural institutions are created.

Bydgoszcz is a city with a population of 350,000, the largest in the Kuyavian-Pomeranian Voivodeship. The name has a Slavic origin - it derives from the name Bydgost.  The second part of the name ("gost" or "goszcz") was associated with hospitality in the Slavic languages. The city is situated on the Bydgoszcz Canal, built to connect the Vistula and Odra rivers, as well as on the Brda and Vistula rivers.

The first stronghold in the place where Bydgoszcz is located was established in 1038. It obtained city rights nearly 300 years later, in 1346. On April 19, the city festival is celebrated on this occasion. For years, Bydgoszcz was in the shadow of Toruń, located approximately 40 km. After Poland joined the European Union, many monuments in Bydgoszcz were renovated, the balance in its development was ensured, some of the attractive areas were given to the inhabitants. Thanks to this, Bydgoszcz is today a place not only interesting from the perspective of tourists, but also good to live in.

Bydgoszcz is also an academic, scientific and cultural center. 35,000 people study at 15 universities. There are, among others: opera, philharmonic, theaters, cinemas, museums, art galleries, orchestras and music groups, about 100 cultural reviews and festivals are held annually.

The oldest monuments in Bydgoszcz are located in the area of the Brda and the Old Town. It is a medieval part of Bydgoszcz, dominated by 19th-century buildings in the form of tenement houses. The town is characterized by granaries located on the Brda River quays. Left over from the times when Bydgoszcz played an important role in river navigation. Only a few such structures have survived, four of which are older than the 19th century. All on the banks of the river, in the very center of the city, all half-timbered and all serving museum functions today.

The main distinguishing feature of Bydgoszcz is the Bydgoszcz Canal and the riverside location of the city. The Bydgoszcz Canal, 26.77 km long, was built in 18 months by the forces of nearly 10,000 workers. It connected Bydgoszcz with Nakło, but most of all it merged the basins of the Vistula and Odra on the basis of their tributaries.

One of the most beautiful parts of Bydgoszcz is the Mill Island. The island is an enclave of greenery with numerous monuments reminding about its industrial past - warehouses, granaries or mills - contrasting with new buildings, such as the stylish Bydgoszcz Opera, whose shape is reflected in the surface of the slowly flowing Brda, or the modern Water Harbor. Within the Młyńska Island there are: Leon Wyczółkowski House, White Granary, Modern Art Gallery and Rother’s Mills. Right next to it here is the famous Bydgoszcz Venice, i.e. a row of tenement houses directly on the Młynówka River and the Mint building, which houses the European Money Museum. Additionally, in several tenement houses there are cafes and restaurants.

The oldest building in the city is St. Martin and St. Nicholas Cathedral. It was erected in the years 1466 - 1502. The interior has rich, mainly 18th-century Rococo furnishings. The most important art monument in the cathedral, and at the same time an object blessed with special religious cult, is a beautiful late Gothic painting of the Madonna and Child, who in an elegant gesture in her other hand holds a tiny, barely blooming rose.

Bydgoszcz can also be visited on board the water tram. The water trams, called Słonecznik I and II  can carry 28 people on board. The cruises start in the Rybi Rynek and last - depending on the chosen route - about 50-70 minutes. The tram runs, among others next to the post office from the first half of the 18th century, the former Bernardine Order, the municipal gas plant and sports facilities, the Bydgoszcz Cathedral, the Nova Opera, the Mill Island and the lock.

In Bydgoszcz, it is also worth visiting the Music District.  Take a walk in the Jan Kochanowski Park, among the sculptures of famous composers, or go to the musical playground. The park is surrounded by beautiful buildings - the Pomeranian Philharmonic, the Academy of Music, the Polish Theater, in front of which stands the famous sculpture of the Archer. There is also a multimedia fountain that spouts water to the beat of the music.

There are also many interesting museums in Bydgoszcz. EXPLOSEUM - The DAG Fabrik Bromberg war technology center makes a great impression. The museum includes eight adapted buildings of the nitroglycerin production zone, connected by tunnels. In addition to the exhibition presenting the nitroglycerin production line for military purposes, equipment used by German soldiers during World War II, and chemical and nuclear weapons, the museum also presents the history of Alfred Nobel's inventions. At the Museum of Soap and the History of Dirt, visitors will learn the history of soap production and use and see exhibits and accessories related to maintaining human hygiene. The first Museum of Waterworks in Poland will help us answer the following questions: What is water and why we cannot live without it? Where does it come from, and how does it end up in the taps? Why should it be cared for and protected? How do we get rid of impurities? In Bydgoszcz, there is also the Museum of the Land Forces, which presents the military history of Pomerania and Kujawy from the Wielkopolska Uprising.

Bydgoszcz: what else can we visit?

The list of attractions in Bydgoszcz is very long. The Bydgoszcz City Hall, Opera Nova, Minor Basilica of Saint Vincent de Paul, Copernicanum and Lloyd's Palace are also worth visiting.

There are many parks in the city. Forest Park of Culture and Recreation- Myślęcinek is the most popular. With an area of over 800 ha, it is the largest city park in Poland and, moreover, located just a few kilometers from the city center. There are numerous walking and bicycle paths, a place for water sports, a botanical garden and a zoo, and in winter, a ski route on the slope of Myślęcinek Mountain.