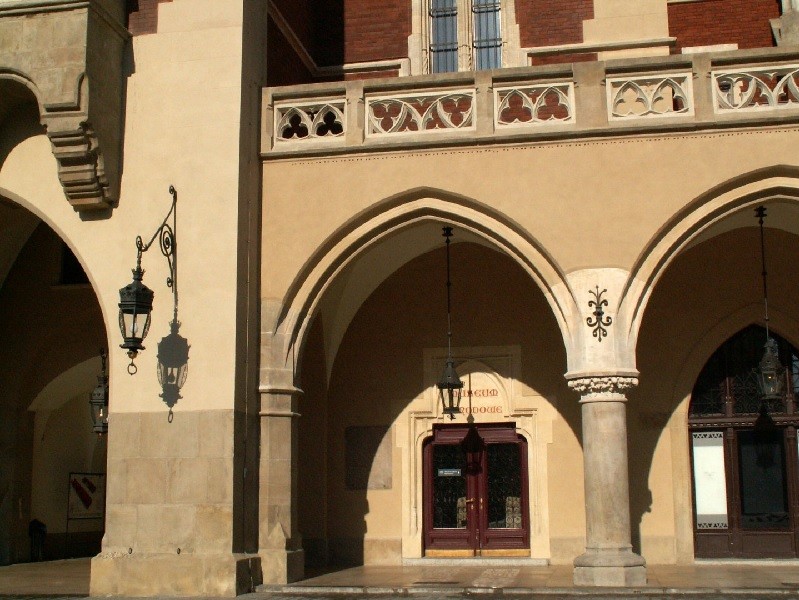 The Cloth Hall are one of the most important historical buildings in Krakow. They are located in the middle of the Krakow Market Square. They were the first medieval department store with merchants from all over Europe. The first Cloth Hall, which was built in the 13th century, when Krakow was granted city rights, were two rows of stone stalls creating a street in the middle of the Market Square. Both ends were locked with a grate at night to keep thieves away. The brick, roofed Cloth Hall was built in the 14th century - their traces in the form of pointed arches on the sides are still visible today. Trade in the Sukiennice was an important source of the town's income - according to the royal privilege, visiting cloth merchants could sell their goods only in this place. Currently, the Cloth Hall has two rows of stands with souvenirs, handicrafts and jewelery. The Gallery of Polish Painting and Sculpture of the 19th century is located on the first floor. The building itself also houses the entrance to the Historical Museum of the City of Krakow - the Market Underground. This place has been operating since 2010 and covers a considerable area of 6,000 m2, 2/3 of which is an archaeological exhibition. In his collections he has, inter alia, approx. 700 exhibits, 600 3D reconstructions. Here you can learn about the history of the city and see the authentically preserved medieval surface of the Main Square. The museum is fully multimedia and shows in a very accessible way the history of Krakow from its location to the present day.

Story about The Cloth Hall in Cracow

Travelling is about meeting new people, new places, getting more information what local culture is. After exploration, visitors have a great opportunity to buy some souvenirs which remind them places they had been visited. So many cities are famous for particular symbols which make them recognizable in visitors’ eyes. In Cracow, there is the Wawel Dragon. Everyone, who comes to the city, cannot leave without at least a small dragon statue. It reminds the legend about the dragon killed by the shoemaker who saved the city of the beast. Not only the dragon is worth to pick up but also amber jewellery, wooden stuff, leather items or sheep skin. All of them perfectly reflect all aspects of rich Cracow culture. And whatever souvenir you need or look for, you can get it in the Cloth Hall in Cracow.

The history of the Cloth Hall in Cracow

The Cloth Hall was a major centre of international trade in the Middle Ages. Travelling merchants used to meet here in order to discuss business and to barter such products like textiles, e.g. from the Netherlands, as well as handicraft works or exotic spices.

The building of the Cloth Hall was firstly constructed in the 13th century. Its first structure was made of stones and planned as two lines of stalls with an inner street separating them. To be well protected at night, the Cloth Hall was closed on both sides at the bottoms of it.

In the 14th century the Cloth Hall was rebuilt and got a gothic form. Then, Polish king Casimir III the Great proposed a new structure by adding arcades. This kind of the arcades is still on the both sides of the Cloth Hall, however, it is not originally from the Middle Ages – only modelled on them.

In the second half of the 14th century the Cloth Hall in Cracow was destroyed in the fire. It was a great chance to get an opportunity to rebuild the building in a new renaissance manner, so popular at that time. The edifice was topped with the decorative attic with the line of peculiar masks called mascarons designed by Santi Gucci (today there is also an extra line of 19th century Cracow majors’ caricatures). Moreover, some column loggias, designed by Italian architect Giovanni Maria Padovano, were added.

The Cloth Hall survived in such structure until the 18th century, then the form was going to be ruined. When the last Polish king Stanislaw August Poniatowski had arrived in Cracow to participate the ball in the Cloth Hall, the city authorities found how seriously the building was destroyed. It was undergoing the conservation treatment in order to be able to organize the royal events. Thereby, the tradition of balls in the Cloth Hall began.

This ball tradition was cultivated mostly in the 19th century. One of the balls was unforgettable for Cracow’s elite for the most famous in the 19th century Polish stage actress Helena Modrzejewska has been invited. She stunned every single person having a good time in the Cloth Hall. During the ball, money for the Adam Mickiewicz’s statue was collected. Today this monument stands just opposite the building. Moreover, this particular ball was also the moment when the opening of the National Museum of Cracow was considered.

Following the tradition of balls, the Cloth Hall still hosts distinguished guests from all over the world, among them Polish and foreign politicians (such as the emperor Akihito from Japan) or UNESCO members.

Museums in the Cloth Hall in Cracow

In 1879 the oldest National Museum in Poland was opened in the Cloth Hall in Cracow with its headquarters on the first floor of the building. Today, it houses the Gallery of the 19th century Polish Art with the most famous artists’ works, including Jan Matejko’s paintings. The Underground Museum, which is situated below the Cloth Hall, brings back the atmosphere of the medieval Cracow. Visitors are able to find here the unusual exhibition called “Following the traces of European Identity of Cracow” which reflects everyday life of local residents in the past. The museum displays also archaeological and historical artefacts, like the early medieval settlement, the Rich Stalls, the basements of the Cloth Hall as well as some small items produced by local craftsmen.

What is Rich Stalls?

The Rich Stalls were additional cloth hall stalls, going alongside the eastern side of the Cloth Hall, where high quality goods were traded. The line of these small stalls consisted of 64 chambers and the transverse passage joining the one in the Cloth Hall. Goods, taken from the basement, were placed on shelves in order to make it possible to reach them at the right time. Today the basements of the Rich Stalls operate as a part of the Underground Museum’s exhibition because they do not constitute a separate building anymore.

The Cloth Hall in Cracow is not only the place of trade, but also the ‘witness’ of medieval crime in St. Mary’s Basilica, situated on the square. According to the legend from the 13th century, Basilica’s towers were erected by two brothers. After a while, the tower built by the older brother began to outweigh the tower of the younger. The envious brother did not want to let his brother become more famous for that, so he murdered him. Over time, he began to be so filled with remorse that eventually he appeared in the window of the higher tower and, holding a knife, confessed to be a murderer and threw himself down. The legendary knife was hung in the gate of the Cloth Hall’s passage and, today, all visitors, going inside the building, can see it there. While doing shopping, look up at it and discover one of numerous surprising items hidden in the Cloth Hall in Cracow. There is much more. Where? It is your turn to find.