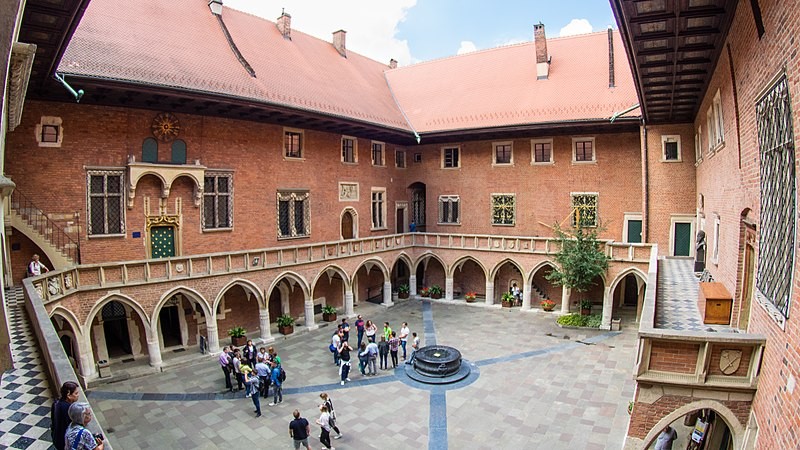 Collegium Maius, located at the intersection of Świętej Anny and Jagiellońska Streets, is the oldest university building in Poland, and the second in this part of Europe (after Prague, 1348). It was founded by King Casimir the Great in 1364 as the Krakow Academy. The numerous outstanding graduates of the Jagiellonian University include the creator of the heliocentric theory, the astronomer Nicolaus Copernicus and Karol Wojtyła, later Pope John Paul II. Currently, Collegium Maius houses the Jagiellonian University Museum. The permanent part of the exhibition consists of historic interiors such as the Libraria (library), Stuba Communis (former dining room), the treasury, professors' rooms and the Lecture Hall (containing a valuable collection of paintings). Also, an interactive exhibition titled Old and Recent Teachings, is available at all times. The collection of scientific instruments at the Jagiellonian University Museum has over 2,000 items and includes exhibits from most scientific disciplines. The most valuable exhibit is the Jagiellonian globe from around 1508, on which America was marked for the first time. The painting collection consists of over 1,400 paintings - the oldest of them comes from the end of the 15th century. The museum has a rich collection of sculptures, approx. 5,000 prints, watercolors and drawings by Polish and foreign artists from the 15th to the 21st century. It also boasts a high-class collection of decorative art (approximately 7,000 items).

Collegium Maius, the oldest Polish university building, is over 500 years old. It was founded by King Casimir the Great in 1364 and is the oldest in Poland and the second (after Prague) university in this part of Europe.

The Jagiellonian University, founded by King Casimir the Great in 1364 as the Krakow Academy, is the oldest Polish university and the second in this part of Europe. Like other medieval colleges, it consisted of autonomous colleges that were the workplace of the faculties. There were didactic classes in the colleges, and scholars lived and worked in them. They also had a separate administration and judiciary, gathered professors who worked in them, but also lived, rested and spent most of their lives. After the death of the monarch, the academy fell into decline.

The beginnings of Collegium Maius date back to 1400, when King Władysław Jagiełło, after the university was renovated, donate to the Academy the corner tenement house of Szczepan Pęcher from the beginning of the 14th century (in the years 1392-1395 belonging to the Kraków merchant Piotr Gerhardsdorf), purchased for valuables donated a year earlier in the will of the queen Jadwiga. The lectures started again.

In the 15th century, the college grew by purchasing neighboring houses and adding a few more. After fires in 1462 and 1492, they were combined into a harmonious whole, creating an arcaded courtyard surrounded by cloisters with a diamond vault belonging to the so-called late gothic style. The name Collegium Maius began to be used.

The building survived unchanged until it was rebuilt in the neo-Gothic style, which was to adapt it to the needs of the Jagiellonian Library. The works took place in two stages - in the years 1839-1858 and 1864-1870. Collegium Maius was the seat of the library until 1940. Soon after, the work led by prof. Charles Estreicher, intended to restore the building to its pre-1840 condition. Collegium Maius was then designated as the seat of the Jagiellonian University Museum.

The Jagiellonian University Museum started to function in the 19th century. However, the university authorities could not officially use the name of the museum at that time due to the prohibition of the partitioning Austrian authorities. The museum changed its name and seat several times. After 1860, when the museum was headed by Józef Łepkowski, professor of archeology, he gave the place the official name of the Cabinet of Art and Archeology. At that time, it was located in the Collegium Novum building. Its collections grew rapidly, mainly thanks to the exhibits on offer. It was only in 1947 that the Jagiellonian University Museum was established at the Collegium Maius by the decision of the university senate.

The Museum collections include, among others a collection of scientific instruments with over 2,000 objects, including exhibits from most scientific disciplines: astronomy, geodesy, navigation, physics, mathematics, chemistry, biology, measures and weights. The collection is based on instruments formerly used by university laboratories, including the first Department of Physics established in 1778, the Astronomical Observatory, the first Chemical Department (1782) and others. Objects of world rank in the museum are a set of three astronomical instruments from the 80s of the 15th century: an astrolabe, a sky globe and a torquetum made by Hans Dorn in Buda, a gift from the professor of the Krakow Academy, Marcin Bylica from Olkusz, and a mechanical armillary sphere with a globe in the middle, the so-called . The Jagiellonian Globe of an extremely rare form from the 16th century, with a map attributed to Francesco Roselli. The cartographic collections are represented by a collection of globes from the studios of such masters as: Gerard Mercator, Willem Janszoon Bleau, J. Gabriel Doppelmeier. The exhibition of scientific instruments is complemented by measuring instruments (17th-20th centuries), demonstration physical and optical instruments, and a collection of chemical and pharmaceutical utensils. Among the exhibits in the field of artistic craftsmanship, the most valuable are, among others university sceptres.

The Museum of the Jagiellonian University has a rich collection of Polish and foreign painting, incl. portrait of Polish kings, professors of the Jagiellonian University (J. Dietl, J. Szujski, S. Tarnowski) and M. Pudłowska (painted by J. Matejko in the 19th century), as well as paintings by A. Grottger, J. Malczewski, O. Poznańska , J. Mehoffer and SI Witkiewicz. Foreign painting is represented by such artists as: Jan Massys "Venus with Cupid", Philips Koninck "A scientist in the studio", Jan Kupecky "Portrait of a nobleman in an eastern costume" from the 18th century, Eugéne Delacroix "The spirit of Hamlet's father". The Museum of the Jagiellonian University also houses a rich collection of medieval and portrait sculptures from the 19th century.

Part of the museum collection is presented in 20 rooms of the permanent exhibition, the content of which relates to the history of the University and the academic community. Among the reconstructed rooms there is a former library, a professor's dining room and university vaults. The ground-floor part of the building, housing the former reading rooms, is a space where temporary and interactive exhibitions are presented. Interactive exhibition projects have been implemented since 2000.

Collegium Maius is the oldest university building and one of the oldest medieval secular buildings in Poland, as well as a great example of harmonious and functional secular Gothic architecture. The facade at Jagiellońska Street has gothic gables and a bay window. A gothic portal leads to the courtyard, in the center of which there is a well. The courtyard is surrounded by a porch, supported by cloisters with a crystal vault. Two pairs of stairs lead to the porch of the first floor - the larger ones are called professors. On the south side, on the first floor, there is a decorative, late-gothic entrance to Libraria - it is the so-called Porta Aurea.

Near the portal, on the wall, there is a clock that wins at 9:00, 11:00, 13:00, 15:00 and 17:00 a piece by John of Lublin from the 16th century and an academic song Gaudeamus igitur. At that time, the clock features figures depicting six figures: a pedel from the Jagiellonian University, Queen Jadwiga, King Władysław Jagiełło, Jan of Kęty, Hugo Kołłątaj and Stanisław of Skarbimierz. This clock is the fourth time it was launched in 2000.