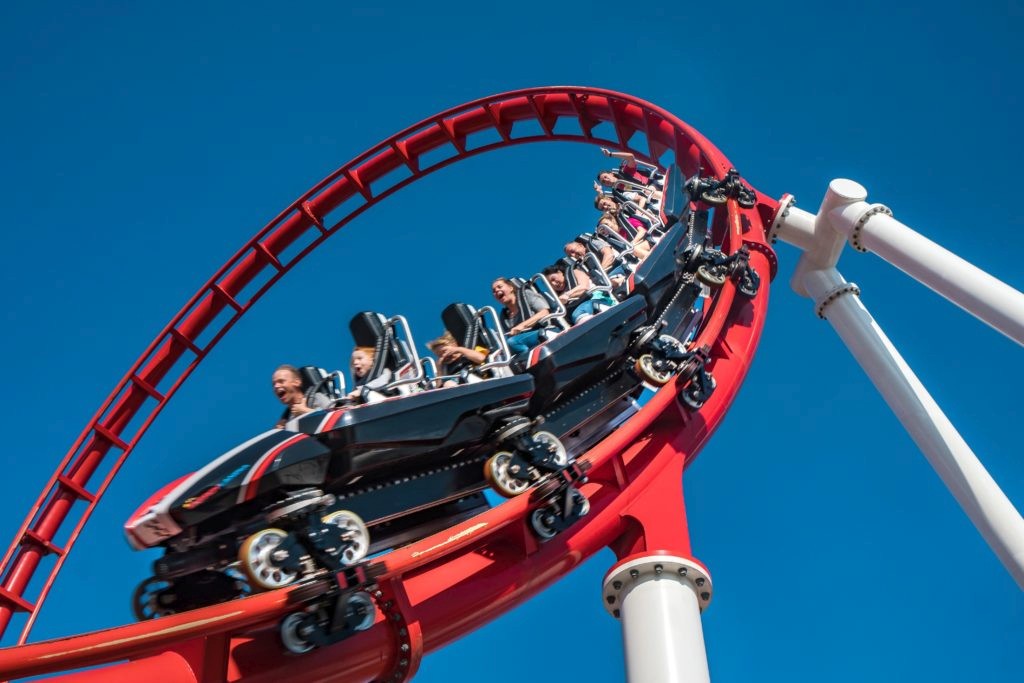 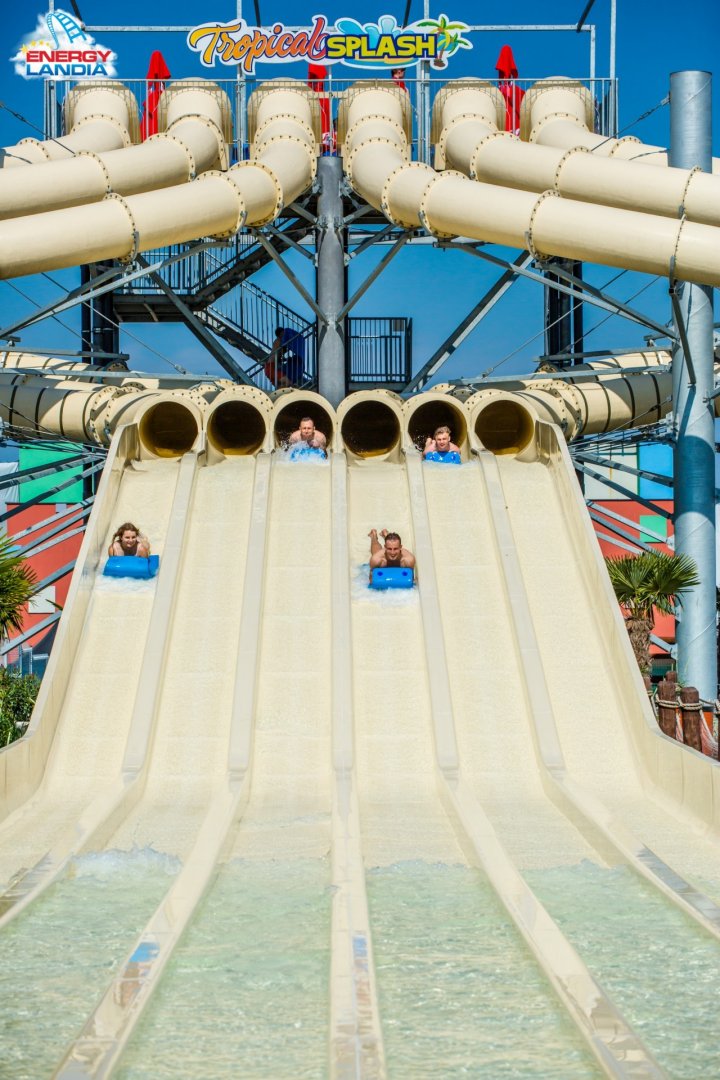 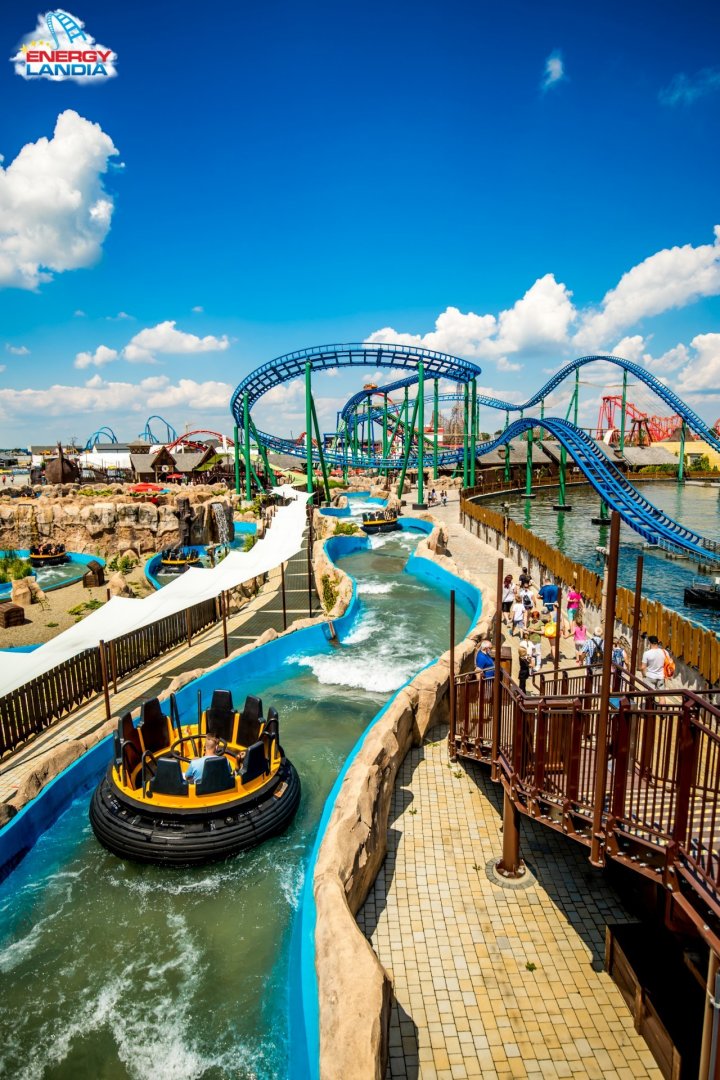 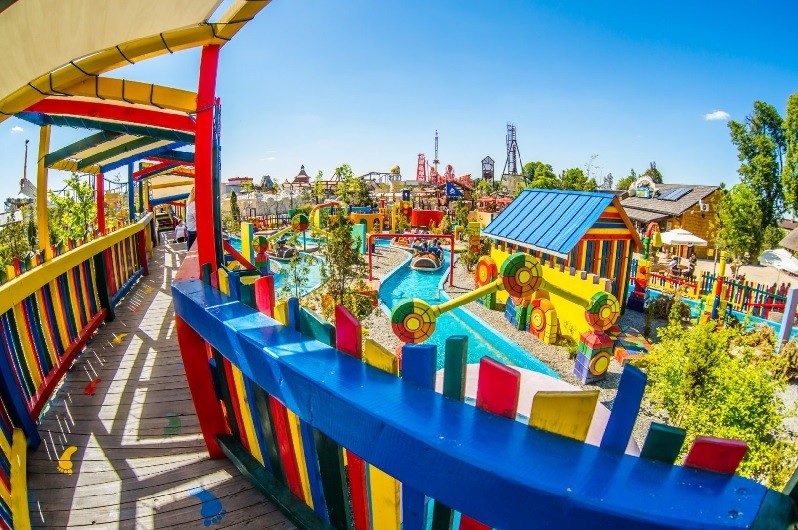 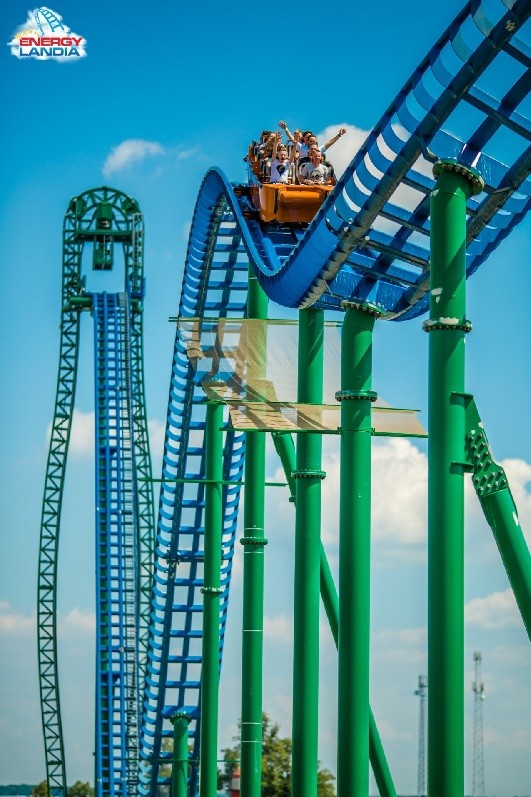 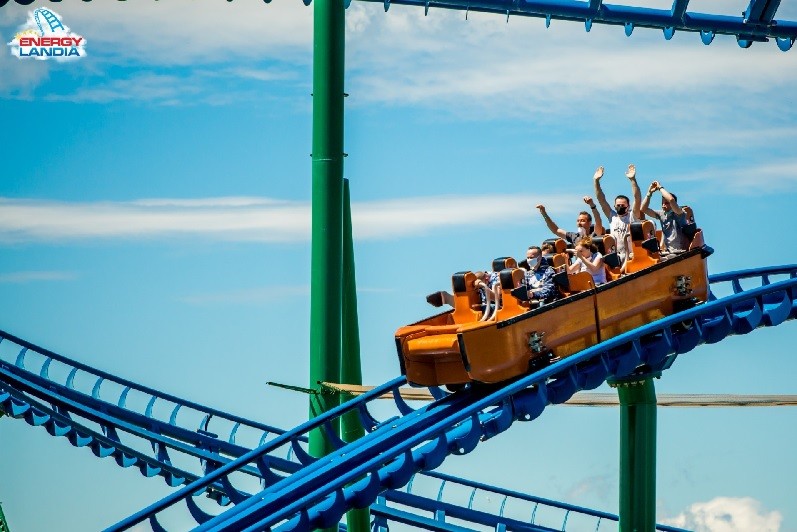 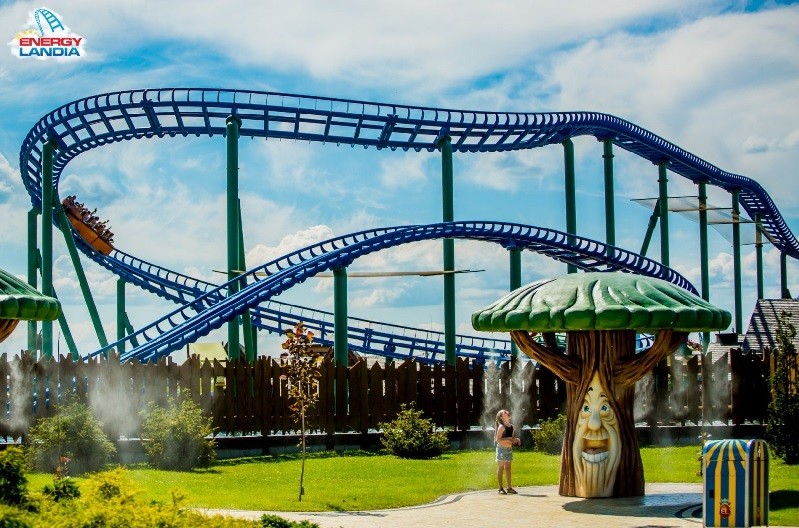 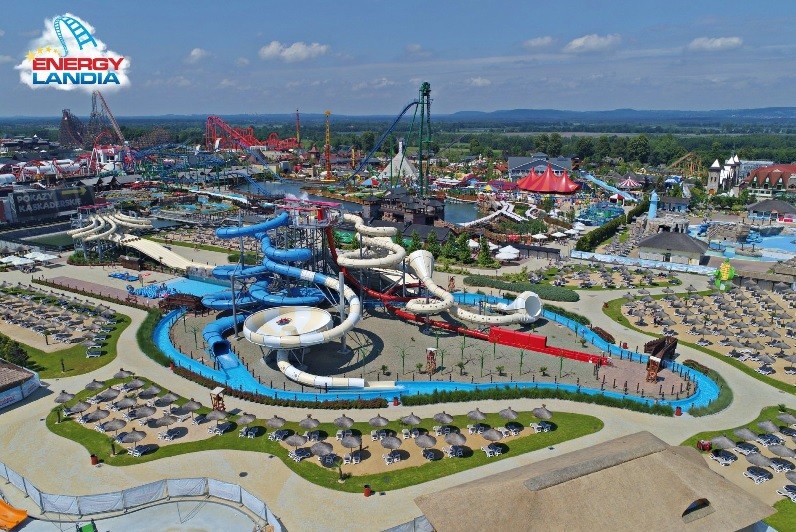 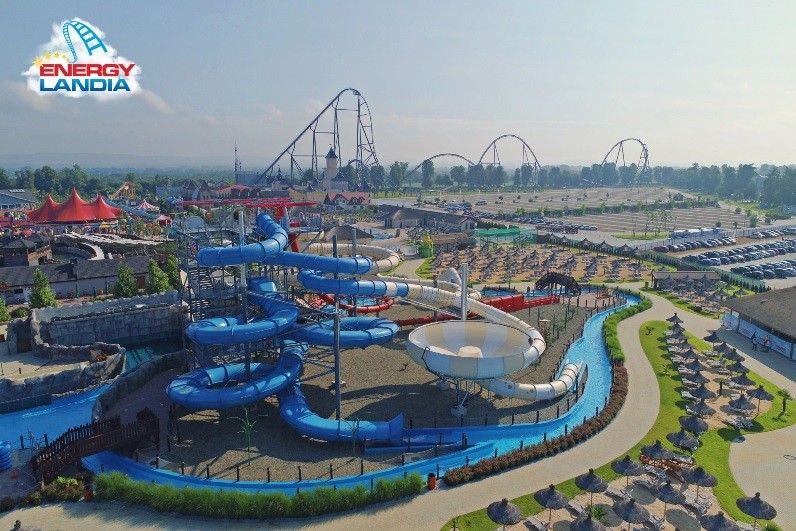 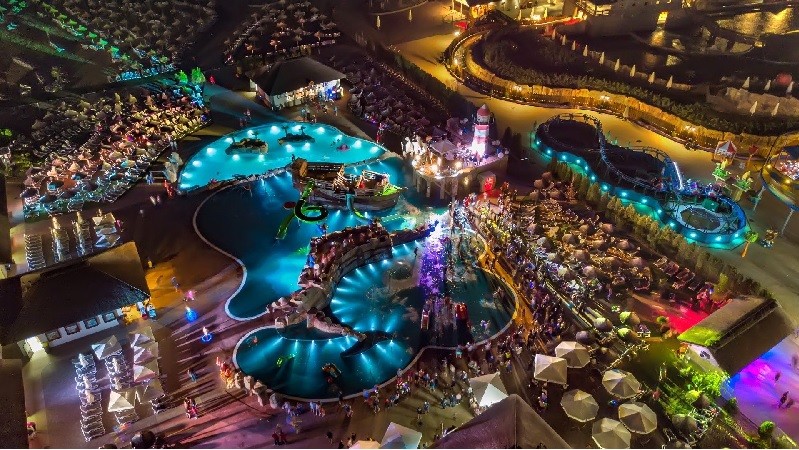 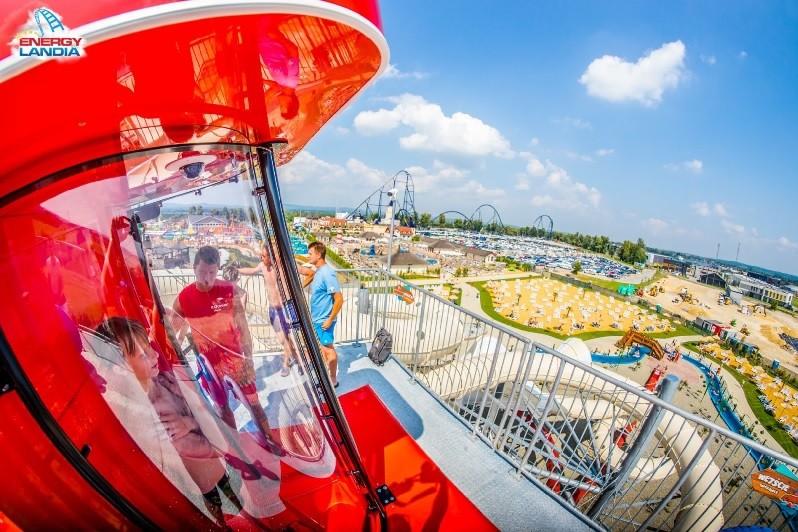 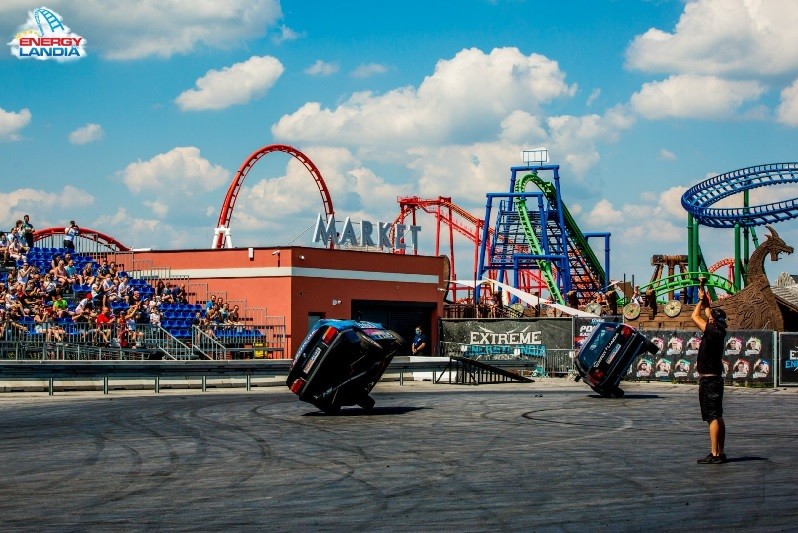 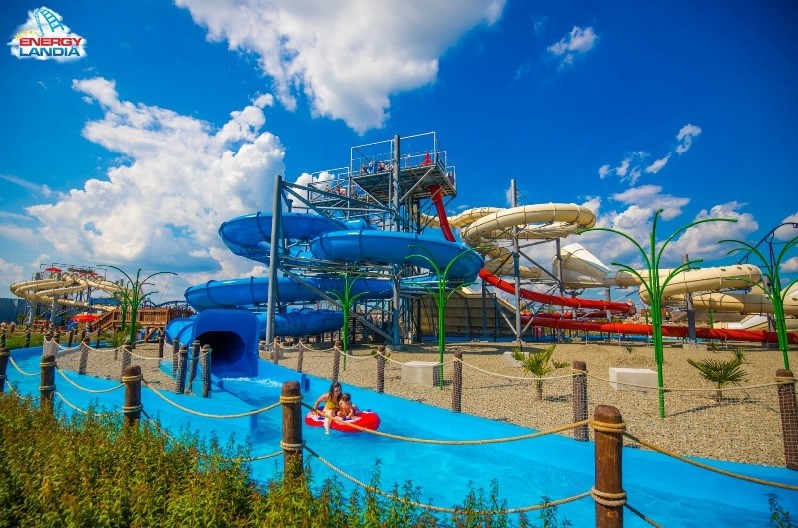 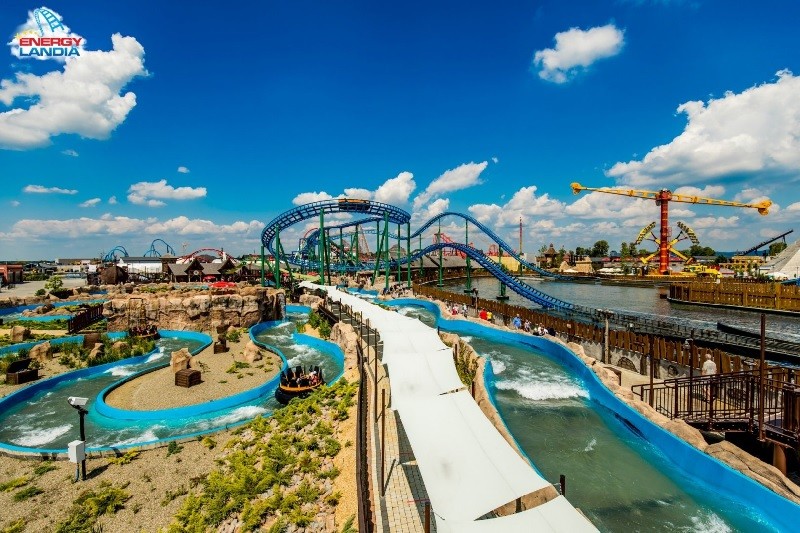 EnergyLandia Park is located in the town of Zator less than a half hour drive from Katowice or Kraków. EnergyLandia is the first full-fledged Amusement Park, which offers its clients world class, highest quality services for all ages: children, teenagers and adults. The park is a place where parents do not need to watch their kids. Instead, they can enjoy their time playing together and spend it on a journey to the land of fairy tales and fantasy—the world of magical and incredible experiences. It is a huge complex with an enormous area of 26 hectares, which includes over 30 various modern and advanced devices and attractions, starting from the extreme ones, through family ones, up to those for the kids. All of them are presented using themed, stylised decorations and arrangements, which together create a complete, audiovisual set prepared for each individual device. It is very important, that in EnergyLandia you only need to buy one ticket to be able to use all devices and attractions as much as you wish and without any limitations.

Energylandia is the largest amusement park in Poland, every year visited by thousands of people. It is an ideal place for holiday and family fun.

Energylandia was opened on July 14, 2014. It is located in the town of Zator, on the border of the two largest southern agglomerations, Silesia and Małopolska, less than half an hour from Katowice and Krakow, and less than 17 kilometers from Wadowice or Oświęcim. The entire complex covers an area of 35 ha. There are nearly 75 attractions in the park, as well as 4 performance stages (two theaters and two amphitheaters), where various types of artistic, pyrotechnic and visual shows (3D mapping) take place every day. There are also restaurants, bars and souvenir shop.

The park is divided into six thematic zones. Each zone is characterized by a different atmosphere, climate and decorations.

1.   Farrytale Land - the land of children's dreams. Children can move into the world of their favorite cartoons here. They can also meet the characters from their favourite stories. There are gentle carousel here, such as the classic Sissi, the fairy-tale carousel or Leos (carousel for the littlest ones with horses moving up and down). There are also Flying Swings, WRC Bumper Cars, Smiejzelki Energus - family roller coaster, Sky – fly ships and magic flying sightseeing train and arctic fun slide. One of the most popular carousel is the Super Pump - a carousel, the cars of which are equipped with water pumps. While driving, kids have to hit the lights imitating fire. Most attractions are available here with no age limit. In this zone there is also a Quiet Corner for Mother and Child, where parents can rest and take care of your toddler.

2.   Family Zone - attractions for the whole family. Visitors will find a lot of water rafting, such as Atlantis (over 500 metres long water ride—a journey to the lost land—Atlantis), Gold Mine (a ride down a special, high track in boats, which splash water all around them) or Splash Battle, where during the ride we can shoot other participants with water cannons. There are also roller coasters here, which still remain safe with the right speed - Mars Coaster, Frutti Loop Coaster, and one a bit more extreme – RMF Dragon Roller Coaster. In addition, there are gentle Planes, a faster version of the Formula 1 - Moya Formula Autodrome and the dark house of fear Monster Attack, on which we travel by cable car. In the Family Zone, there is also a very family Boomerang roller coaster, which moves both forward and backward. Its speed reaches 70 km / h, and the height is 25 m. Here there is height restriction of 140 cm on some of the rides.

3.     Extreme Zone - a zone created for young people and adults who like an adrenaline rush. In this zone, since the 2018 season, the most popular is Hyperion Mega Coaster - the tallest and fastest Mega Coaster in Europe. The first descent is 80 meters, an 84 degree slope, and ends with a climb into a huge tunnel. The height of the structure alone is 77 meters, and the roller coaster accelerates to 142 km/ h on a track with a length of 1,450 meters. Another attraction, Speed Water Coaster is the world record holder among water roller coasters. Its height is over 60 m, and the wagons run at a speed of 110 km / h. An additional attraction are the descents straight into the water with a big splash. In that zone visitors will also find the Apocalipto two-arm swivel bench, the enormous pendulum Aztec Swing , 40-meter Tsunami Dropper or the Space Booster arm rotating at 100 km / h. In March 2016, the Maya Formula roller coaster was opened. The cars can reach over 100 km/ h in just 2 seconds!

4.     Big Milk Water Park & Tropical Fun – a zone opened in 2016, which looks like a tropical island with 3 heated pools (the first for those who can swim - 135 cm deep, and the other two are paddling pools for children: the first is 20 cm deep, the second - 40 cm), covering a total area of 1800 m2. From the 2018 season, a huge Tropical Fun water playground exists here. Tropical Fun is fun on 10 slides, adapted to different age groups and with different levels of difficulty! There are the extreme ones, such as Kamikaze - known as a trapdoor slide, and those conducive to family fun. There are 300 single and double pontoons waiting for guests, as well as a huge beach with deckchairs for rest and relaxation. The water zone operates mainly in the summer season, with favourable weatherconditions and when the temperature is at least 20 degrees Celsius.

5.     Dragon Town - is a journey into the medieval world of magic and dragons. The streets are styled here in medieval gothic style. Everything is made of wood and stones. The main attraction of the Dragon Town is the world's tallest hybrid roller coaster called Zadra, which reaches a speed of 121 km / h.

6.     Aqualantis - another part of the park, which will be built on an area of 6 hectares, surrounding the new Abyssus roller coaster. The plot of the new part of the park refers to the ancient Atlantis. The streets will be stylized as the ancient kingdom and its ruins.

The park is open from April to the end of October from 10 a.m. to 6 p.m., in July and August from 10 a.m. to 8 p.m. During special events and holidays, the opening hours are sometimes extended. The park is closed on certain days in April and October. There is a car park in front of the entrance to the Park, the cost of which is PLN 5 for the entire day of stay.