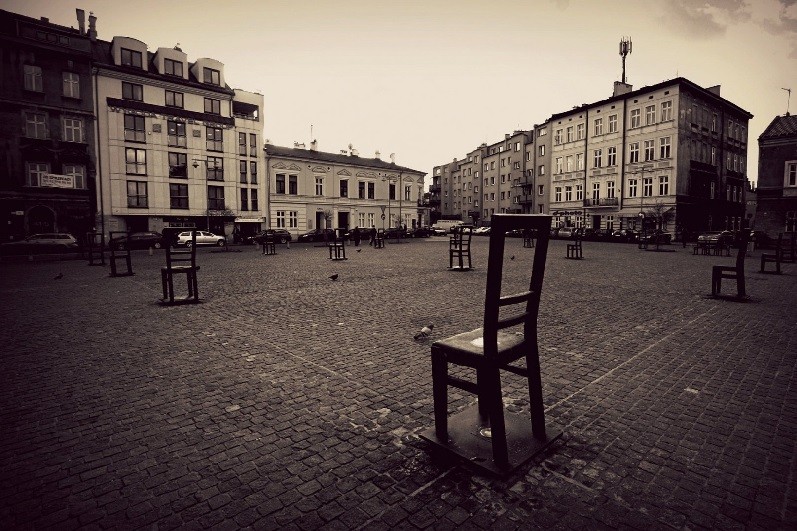 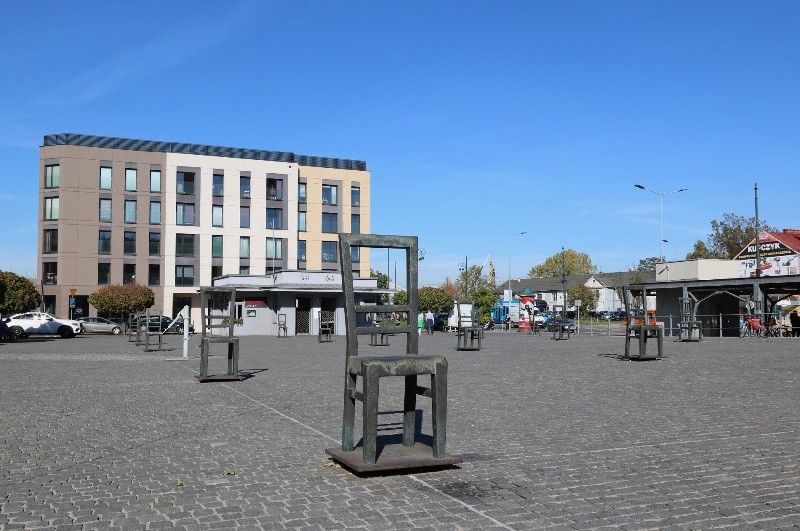 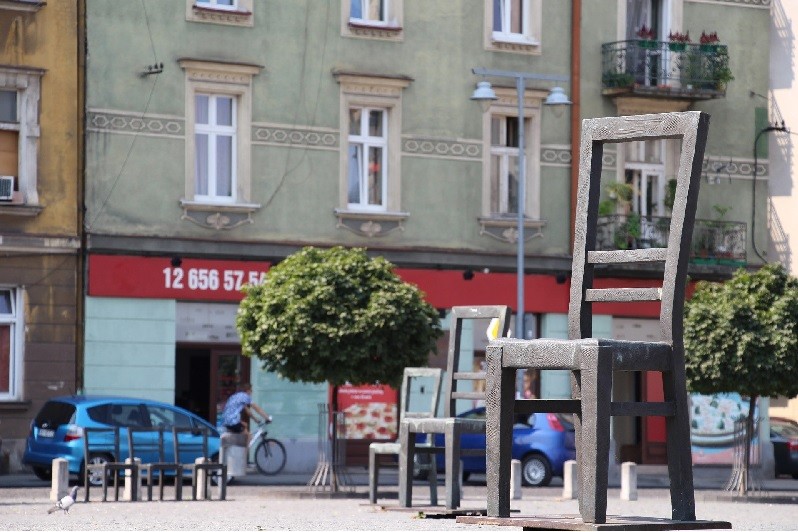 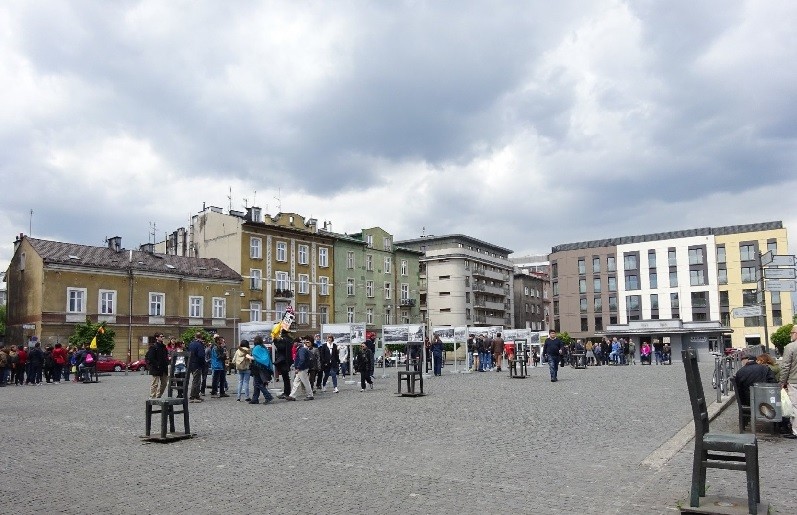 Ghetto Heroes Square
The Ghetto Heroes Square is one of the most significant places in the history of Krakow and Jewish communities. Formerly known as Zgody Square in Krakow’s district of Podgorze – an area that was transformed into Krakow Ghetto under Nazi rule during WWII. It was as this very square that Nazi occupants gathered Jewish people before deporting them to nearby Auschwitz and Plaszow concentration camps.
With its redesign in 2005 a living monument of 70 larger-than-life chairs was set up on the square to commemorate all the people of Krakow Ghetto whose fate was sealed here. The chairs are a reference to the description of the events by Polish pharmacist Tadeusz Pankiewicz, who ran a pharmacy in Krakow Ghetto.

The tragic history of Kraków’s Ghetto

The Ghetto Heroes Square together with its artistic installation commemorates the tragic events and troubled history of the Jewish communities in Kraków. The history of sorrow and terror in the streets of today’s district of Podgórze.

From the very first days of German invasion in Poland the Jewish communities saw numerous repressions being introduced by the invaders. Initially, those included forced labour, obligatory armbands with the symbol of the Star of David and they were soon followed by confiscation of valuables, possessions as well as Jewish properties. By May 1940 the German occupants deported a great number of Jewish people from Kraków. Out of nearly 70 thousand Jewish inhabitants of Kraków only 15 thousand remained within the city limits. However, on 3 March 1941 when Kraków District’s governor, Otto Gustav Wachter, ordered the Kraków’s Ghetto to be set up by 20 March in Podgórze their lives in Kraków were coming to an abrupt end.

The district of Podgórze was chosen as a location for the new ghetto and all its inhabitants were relocated to other districts of Kraków. Quite often they were given accommodation in previously Jewish-owned apartments. The ghetto itself spanned over the area of roughly 20 hectares with about 320 houses. At first, the area was closed-off and surrounded with barbed wire later to be replaced with tall, bricked wall resembling Jewish gravestones. Some fragments of the ghetto wall remained to this day. All 15 thousand Jewish people that stayed in Kraków were now relocated to the ghetto. That number soon reached 20 thousand when Jews from neighbouring towns and villages were too locked in the ghetto. The ghetto itself was sealed up as well with four gates leading in and out. What is more, the severe German rule meant that leaving the ghetto without a proper authorisation was punishable by death. The capital punishment would also apply in case any Polish citizen would try to help or give shelter to any Jew that escaped the ghetto. However, this did not deter the Polish people from helping by whatever means they could. Quite often any supplies or provisions were smuggled on one of the two trams that ran non-stop through the ghetto. An enormous amount of help as well as stories of life in the ghetto came from Tadeusz Pankiewicz who ran the Eagle Pharmacy and was a sole Polish citizen allowed to live and run business within the Kraków’s ghetto.

The first major deportations began in early 1942. In the night of 31 May assisted by qahal representatives and the officers of Jewish Ghetto Police the Germans deported as many as 5 thousand Jews from the ghetto. They were transferred to Belzec extermination camp and later executed.

By the end of October 1942, the second major deportation took place. Over 7 thousand Jewish people were deported and many lost their lives on site. The ghetto was then subdivided into parts A and B with the former being occupied by people able to work and the latter by those unfit to work, elderly and ill.

On 13-14 March 1943 the German forces supervised by SS-Sturmbannführer Willi Haase carried out final deportations and liquidation of the ghetto. Those who were deemed fit to work were transferred to various concentration camps, including Auschwitz and Płaszów and nearly 2 thousand were murdered by the German troops.