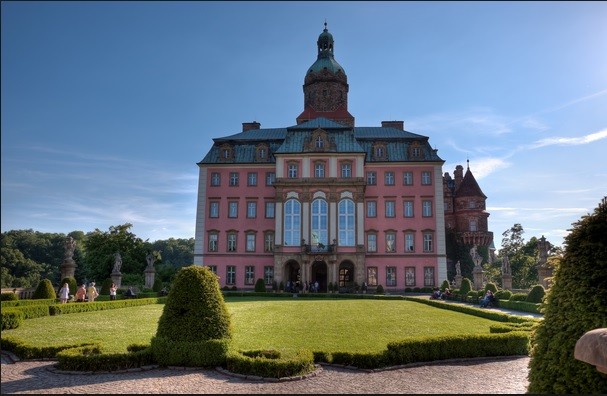 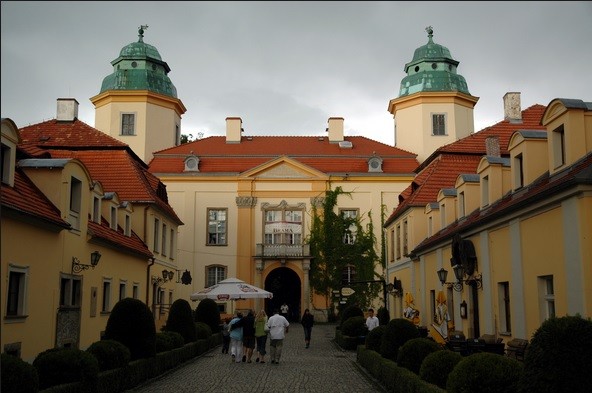 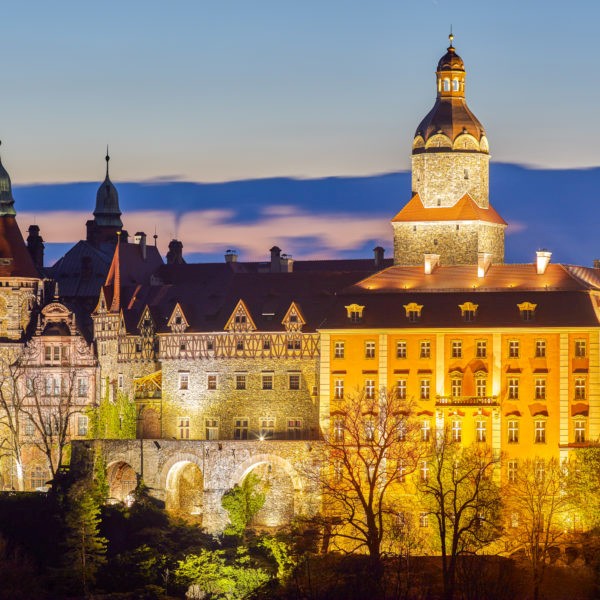 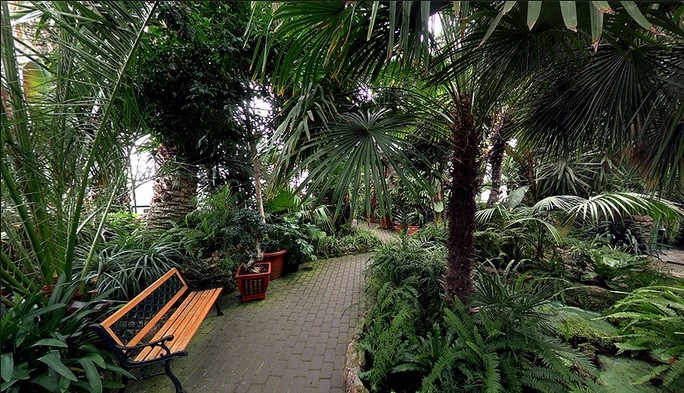 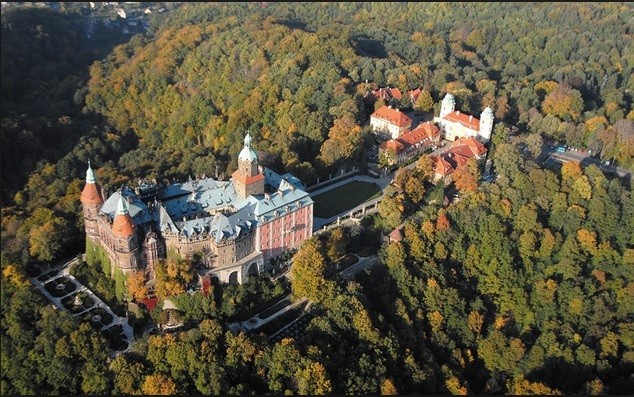 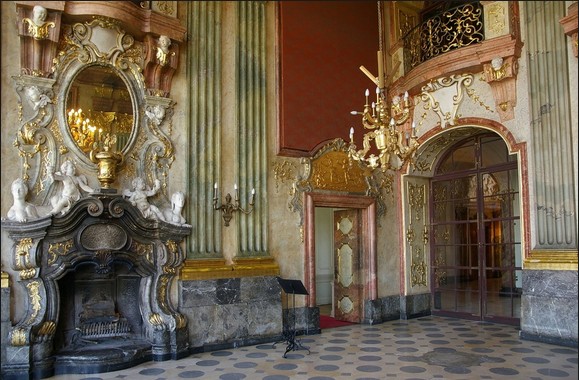 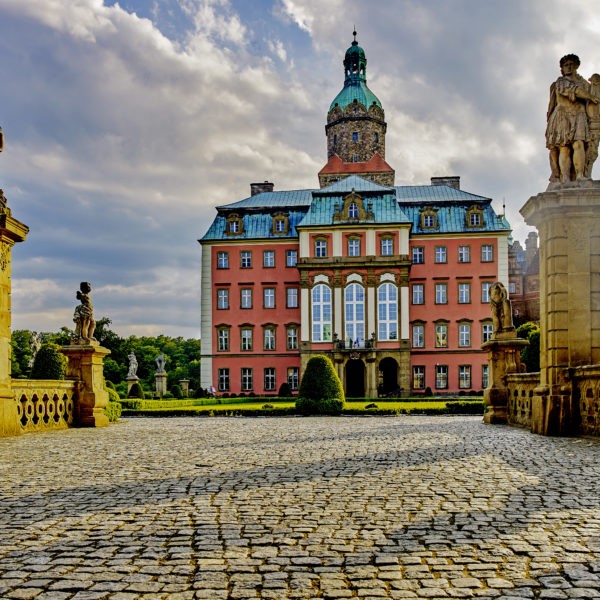 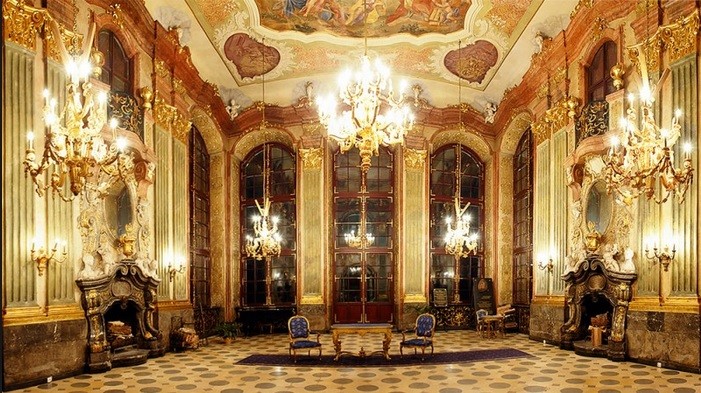 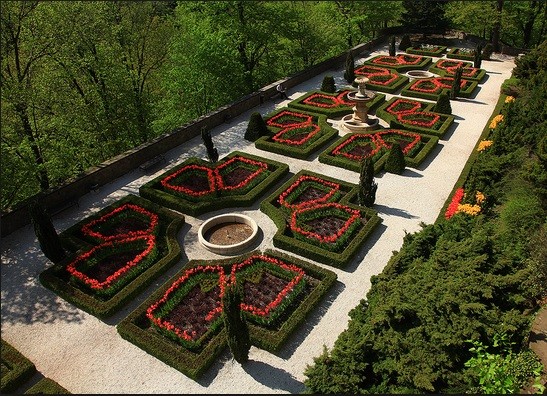 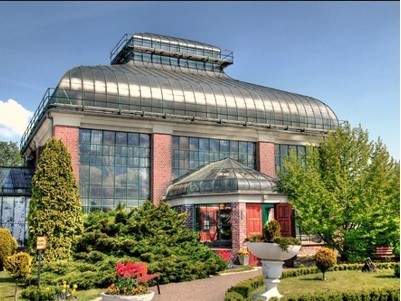 Książ Castle is especially interesting as it joins older history, as the construction started in the 13th century, and more recent history as it was largely changed during WWII. If you enjoy conspiracy theories of the human civilization, there is no other such place like Książ as digressions about Hitler purposes for Książ are numerous. During sightseeing of the castle, you will be able to see lots of alternations introduced by Nazi Germans. Apart from the Castle itself it is worth to stroll in the Książ gardens designed in French style and also to visit palm house nearby. Sightseeing of the castle takes about 2 h.

Książ Castle is the largest castle in Lower Silesia and the third largest in Poland. It is a majestic building with varied architecture and a fairy-tale location in the heart of the Książ Landscape Park.

Książ is one of the most beautiful parts of Wałbrzych. The city is famous for its unique location on the slopes and valleys of the Wałbrzych Mountains. It amazes with the abundance of wonderful monuments and cultural institutions. Discovering Wałbrzych attractions is possible with an EXPLORE ticket, which is valid for 12 months. This ticket includes visiting Książ Castle, the Palm House and two attractions in the city center: the Old Mine Science and Art Center and the Porcelain Museum.

Książ Castle is located in the north-western part of the city of Wałbrzych in the Dolnośląskie Voivodeship. It lies on the border of the Sudeten Foreland and the Central Sudetes, in the central area of the Książ Landscape Park established in 1981 on the Pełcznica River, which belongs to the Odra River basin. The castle and park complex "Zamek Książ" consists of a number of buildings, garden terraces and an extensive park layout. The whole area covers an area of approximately 26 hectares.

The castle in Książ was built at the end of the 13th century, in the years 1288-1292. In its turbulent history, the castle passed from hand to hand, for some time being a Czech, Prussian or Russian property. Ultimately, however, it returned to Polish hands. More than once, the castle was also damaged, inter alia as a result of wars, it was also rebuilt several times.

Comprehensive renovation works began in 1974 and today Książ is one of the most beautiful castles in Poland. Together with the magnificent park and palm house from the beginning of the 20th century, it is an extraordinary attraction visited by thousands of tourists.

The castle can be visited in several ways. The routes are thematically diversified, they also have different walking times.

A walk around the most representative halls of the Książ Castle with audio sets takes 75 minutes. Visitors move around the castle in the direction indicated on the information boards. Depending on the option chosen, visitors can also see the palm house and terraces. The Palm House is located at a distance of the Książ Castle, about 25 minutes on foot, or 5 minutes by bus / car. There are three car parks in different locations throughout the complex.

The extended version is the guided route "From the Piasts to the Secrets of World War II", which also includes the recently opened third floor of the castle and a part of a mysterious tunnel located 15 meters below the castle, built by the Nazis as part of the "Riese" project. The duration of the visit is approximately 90 minutes.

For groups of more than 15 people, the "Książ Baroque" route has been planned, leading through the baroque salons of the castle, and the "Daisy Trail" route, which also includes the park and the viewpoint. For each guided route, visitors can buy a ticket for the castle tower, which offers a panoramic view of the Sudetes.

In the vicinity of the Castle, about 9 minutes on foot, the Castle Stables, erected in 1844, are open to visitors. They were the only ones that survived the turmoil of the war intact. Horse and carriage rides are organized in the stable.

In a similar location, visitors can see the Mausoleum with an underground crypt, which originally served as the Summer Pavilion with a viewing point. Over time, it was transformed into the Hochbergs' funerary chapel.

To see all the above attractions, the castle offers an "ALL DAY ticket". With this ticket visitors will discover the extraordinary heritage of the Hochberg family and will admire the objects that belonged to them: Książ Castle, Palm House with exotic vegetation, Stallion's Herd - where horses of noble blood were bred, richly decorated Mausoleum and the undergrounds included in the Riese project. The visiting time is approximately 6 hours.

For those seeking thrills, the castle has prepared a real thrill during the Night Tour. It is an amazing opportunity to see, after dark, the former Hochberg cellars, or the abandoned 5th floor, which are not available during the daytime sightseeing. This adventure takes place under the watchful eye of guides for 90 minutes in a mysterious atmosphere filled with tales of terrifying and unknown stories related to the Prince.

Events in the castle

Książ Castle is a place of numerous events and cultural initiatives.

The most popular event organized in the facility is the "Festival of Flowers and Art". For just a few days of the event, over 100,000 visitors come to the castle to admire the unusual flower arrangements in the castle interiors made by world-renowned florists. The event abounds in numerous performances, music and dance performances, and knightly fight shows.

The most prestigious event is the "Ambassador of Wałbrzych". During the ceremonial gala, successful people, important representatives of culture, sport and media connected with the city are awarded.