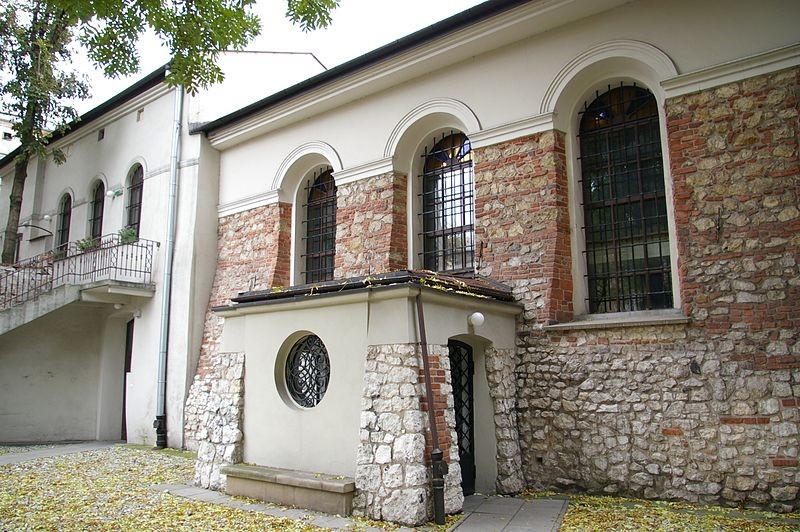 The Kupa Synagogue is a synagogue built in the 17th century, in the Baroque style, with beautiful polychromes renovated at the beginning of the 21st century with biblical motifs and signs of the zodiac. The synagogue was erected right next to the city walls of Kazimierz. Originally, its floor was approximately 80 cm below the current level. Thanks to such a low position, it was completely hidden behind the city wall. There was a hospital for poor Jews nearby, which is why the synagogue was often called the Hospital or the Synagogue of the Poor. Currently, the synagogue belongs to the Jewish Religious Community in Kraków. Occasionally it serves as a place of worship. Meetings, concerts, exhibitions and lectures take place in its rooms, especially during the Culture Festival.

The Kupa Synagogue in Krakow was built in the 17th century. It is a baroque monument, inside which remarkable paintings have been preserved: a cycle of zodiac signs, city panoramas, incl. Jerusalem and Hebron, motives related to Judaism - the Mamre oak and the Wailing Wall.

The synagogue was built in the 1740s with funds from the donations of craftsmen and small merchants. Additional money to complete the construction donated the goldsmiths' guild.

The synagogue was erected right next to the city walls of Kazimierz. Originally, its floor was approximately 80 cm below the current level. Thanks to such a low position, it was completely hidden behind the city wall. There was a hospital for poor Jews nearby, which is why the synagogue was often called the Hospital or the Synagogue of the Poor.

In the nineteenth century, the synagogue was expanded several times: first, in connection with the construction of Miodowa Street, a garden was created between the street and the synagogue's facade, and one of the walls of the temple is the defensive wall of Kazimierz. A two-story outbuilding and a communication porch to the women's room were also built. In the interwar period, restoration and aesthetic works were carried out. The interior was decorated with new paintings, and the entire building was surrounded by a decorative fence.

During World War II, the synagogue was destroyed, first of all in terms of its interior and furnishings. After the end of the war, the synagogue had various functions, including a matzah factory (1946 - 47) and - a ritual poultry slaughterhouse - until the death of Mohel Abraham Lesman in 1985. Later it served, among others, as a saddlers' cooperative, but at the turn of 2000 and 2001 it was taken over again by the Jewish community and it is under its jurisdiction to this day. The synagogue has been renovated, the interior fittings have been reconstructed - so you can again admire, among others, a bimah or an altar cabinet.

The synagogue is a baroque building built on a rectangular plan, covered with a gable roof. The only external element indicating its sacred character are high, semicircular windows. Inside there is a square prayer room, and on the west side there is a vestibule. Above the vestibule, on the first floor, there is a women's section, with barred windows overlooking the main room.

On the wooden ceiling of the main prayer room there are paintings from 1925 depicting the panorama of Jerusalem and the Flood on the north side, Tiberias and the Mamre oak on the south side, Jaffa and the Wailing Wall on the east side, and a panorama of Hebron and Haifa on the west side. Musical instruments surround the entire painting with numerous geometric motifs. Under the present layer of polychrome, there are four fragments of other layers of paintings from the 17th, 18th and 19th centuries. The full cycle of the signs of the Zodiac has been placed over the women's gallery. There is a signature under each character.

On the eastern wall of the main hall, between the windows, there is a baroque Aron Kodesh from the 17th century. In its central part there is a crown with a Hebrew inscription, and in the top one there is a vase with flowers and a plaque with a gilded Hebrew inscription, in which the original text has been pierced in two places, introducing current data:

Next to the Aron Kodesh, a rectangular polychrome has been preserved, depicting a table for twelve showbread, which is to symbolize the 12 tribes of Israel. In the middle of the room, there are traces of an octagonal bimah arbor.

In the synagogue, the polychromes present human figures in a very bold and realistic way. For the signs of the zodiac: Sagittarius is a centaur holding a bow taut, twins are two youths with torches, and a virgin is a girl carrying a sheaf of grain. One of the pictures also shows Noah with his face visible, introducing the animals into the ark. In the middle of the room there are foundations of the former octagonal arbor, marked with dark tiles. Recently, a forged chandelier was installed, consisting of three nine-armed candlesticks (chanukiahs).

Currently, the synagogue belongs to the Jewish Religious Community in Kraków, which in 1996 started renovation works intended for the purpose of the Jewish museum. In the years 2000–2002, extensive conservation works were carried out under the supervision of Józef Furdyna. The Aron Kodesh and wall paintings were renovated.

The synagogue serves as a meeting place, concerts, exhibitions, and lectures, especially during the Jewish Culture Festival. It is also the main synagogue of the Kraków Jewish community.