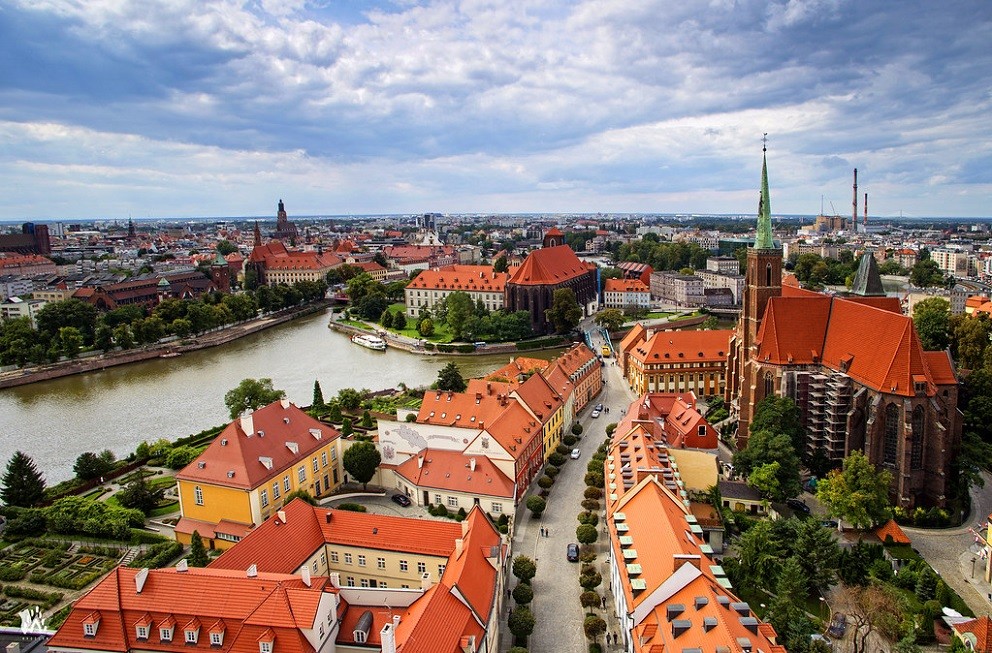 Ostrów Tumski is the oldest, historic part of Wrocław. It was created in the area of crossings on the Odra River, between the estuaries of the rivers - Oława in the south, Ślęza and Widawa in the north. One of the most beautiful monuments of Ostrów Tumski is the Gothic cathedral of St. John the Baptist and the Church of the Holy Cross. A popular meeting place and tourist attraction is the Tumski Bridge between Wyspa Piaskowa and Ostrów, also known as the Lovers' Bridge. The lovers hang padlocks on it as a sign of their love. There is also the Archdiocese Museum in Ostrów Tumski. For over 100 years, it has been gathering monuments of sacred art of great historical and artistic value. Among them, we can find the "Book of Henryków" from the 13th – 14th centuries, with the first sentence written in Polish.

Ostrów Tumski is the oldest, historic part of Wrocław. For many people it is one of the most favorite places in Wrocław.

Ostrów Tumski was created in the area of crossings on the Odra River, between the estuaries of the rivers - Oława in the south, Ślęza and Widawa in the north. In pagan times, Ostrów Tumski was the place of life of Ślężanie. In the Middle Ages it became the seat of Silesian princes from the Piast dynasty. From 1000, i.e. from the moment of establishing the bishopric, it became the center of the Church's authority. Around 1163, Ostrów Tumski came under the rule of Bolesław the High (grandson of Bolesław Krzywousty). The ruler established his new seat in Ostrów Tumski. The first stone and brick buildings began to be built. Over the following centuries, the area of Ostrów Tumski was rebuilt and modified many times. Until the 19th century, the island retained its purely ecclesiastical character. There were 6 churches and several dozen residential buildings, including the residences of bishops and canons. For hundreds of years, Ostrów Tumski functioned as an island. It was not until 1824 that it became part of the mainland due to the fact that one of the branches of the Oder was flooded.

The oldest building in Ostrów is the Church of St. Giles (Kościół Św. Idziego). It comes from the beginning of the 13th century.

Cathedral of St. John the Baptist is considered one of the most beautiful buildings in Ostrów Tumski. It is also the tallest historic building in the city. It is 97 m high and 100 m long. Its construction began around 1000. . Inside the cathedral there are valuable monuments of sculpture and painting: the triptych of the Dormition of the Blessed Virgin Mary from 1552, a brick pulpit (1723), oak stalls created in the years 1662-1665, as well as numerous tombstones from the Middle Ages, mannerism and baroque. The cathedral has 21 chapels. Worth seeing is the chapel of St. Elizabeth (1680-1686) and Elector's Chapel (1716-1721), the work of the outstanding Viennese architect J.B. Fischer von Erlach.

One of the most romantic places in Ostrów Tumski is the Tumski Bridge (Most Tumski), also known as the Lovers' Bridge. The bridge measures over 52 meters, and its width is over 6 meters. It was built in 1889. The lovers hang padlocks with their names, believing that thanks to this they would be together for many years.

Approximately 50 meters behind the Tumski Bridge, there is Kościelny Square. There is a statue of St. John of Nepomuk. The monument measures approximately 9.5 meters. John Nepomuk died for keeping the secret of his confession. According to the legend, the Czech king Wenceslaus IV sentenced him to death in 1393. The king suspected his wife of treason, and Nepomuk did not reveal her sins, for which he was punished with torture and death.

There is also the Church of the Holy Cross on the Kościelny Square. The building was erected in the years 1288-1295. The church was founded by Prince Henry IV the Right, as part of the end of the dispute between him and Bishop Thomas II. The church consists of two floors, the lower church Bartholomew and the upper right of the Holy Cross.

The Archdiocese Museum is located on the Cathedral Square. For over 100 years, it has been gathering monuments of sacred art of great historical and artistic value. Among them, we can find the "Book of Henryków" from the 13th – 14th centuries, with the first sentence written in Polish.

An ideal place for a walk will be the Wrocław Botanical Garden, established in 1811, in which over 7.5 thousand species of plants grow. It was established in the area of Ostrów Tumski and the areas of city fortifications, which were ordered to be destroyed by Napoleon.

The Magic of Ostrów Tumski

Ostrów Tumski is one of the favorite walking places of Wrocław residents and tourists. It gets especially magical after sunset. The magic and charm of the place is created by the lighting of streets and buildings. In Ostrów Tumski in Wrocław, there is still gas lighting. Every day the lamplighter can be seen at dusk in his unique cape and top hat lighting the 103 gas lamps in the district. Ostrów Tumski is worth visiting at any time of the day or night. The atmosphere of both the morning and evening Ostrów Tumski is unique.