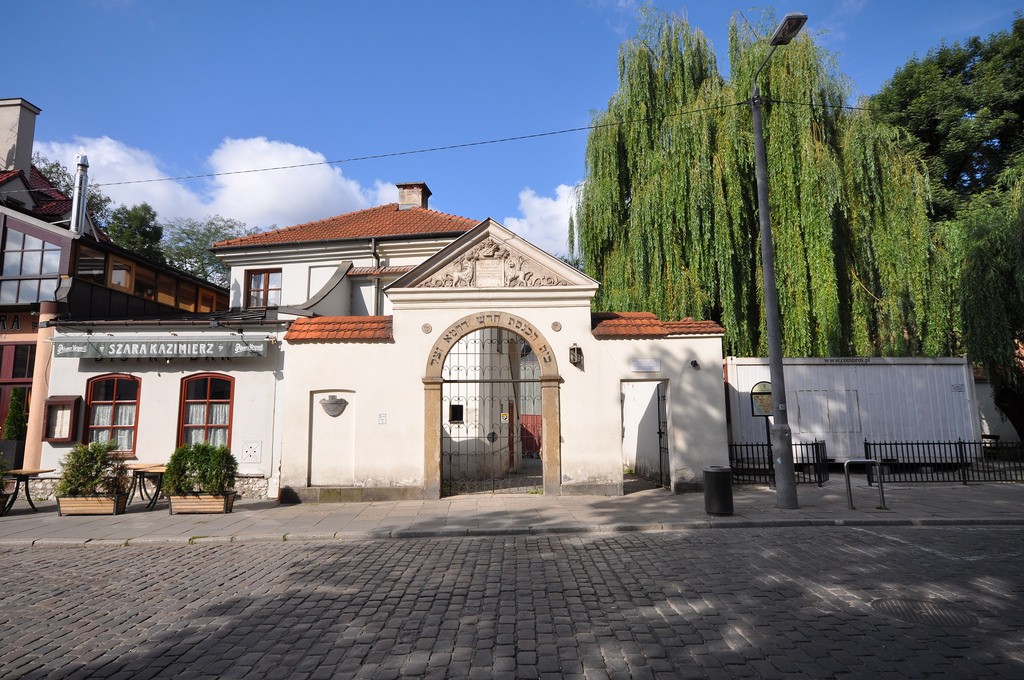 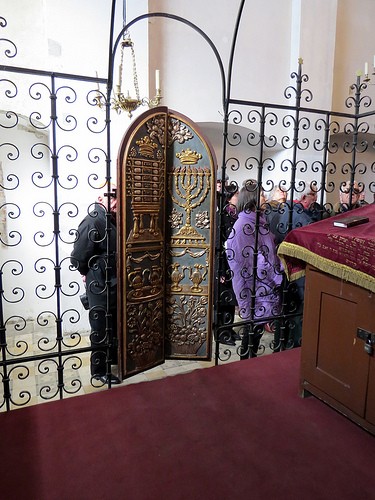 Remuh Synagogue is the only active synagogue in Krakow. It is situated in the old Jewish Kraków district – Kazimierz, at 40 Szeroka Street. It is the only synagogue in the city which has regular religious services and the second oldest synagogue in Kraków. The construction of the synagogue started in 1558 in the place of a former wooden building which had burned. IThe building was rebuilt many times. Unfortunately, during World War II the synagogue was deeply devastated and its interior design was stolen. After the war it was reopened for the believers and from time to time some conservation works are performed. Simultaneously with the construction works in 2009–2012, the polychrome in the women's gallery and in the prayer room were discovered and preserved. The oldest parts of the paintings found on the northern wall of the prayer hall come from the 17th century. Currently, the synagogue is the only Jewish house of prayer in Krakow, where services are held regularly, at times consistent with the tradition. However, they are not held every day, but on all Sabbaths, holidays and special occasions. The old Jewish cemetery adjoins the synagogue. The synagogue and the adjoining cemetery form a unique and priceless complex of Jewish architecture and religious art dating back to the 16th century.

The Remuh Synagogue (Remu) is an active center of religious life. It is located in Krakow's Kazimierz, 40 Szeroka Street. It is adjacent to the old Remuh Jewish cemetery. It is the second oldest Jewish prayer house in Krakow.

The origins of the synagogue date back to the mid-16th century. In 1553, the merchant and royal banker Izrael (Isserles) ben Józef, the grandson of Mojżesz Auerbach, tried to obtain permission from King Sigismund II Augustus to convert his house into a synagogue for his son, the eminent scholar and rabbi Moses Isserles. In 1556, the king gave his consent, but a year later a great fire destroyed part of Kazimierz together with the wooden Iserless synagogue. In 1558, the synagogue was rebuilt, but this time a brick building was erected. Probably the builder of the synagogue was Stanisław Baranek.

Significant changes in the construction were brought in 1829 by the reconstruction led by the architect August Pluszyński. At that time, the main prayer room was raised and covered with a new, wooden barrel vault in place of the old, brick one. In the place of wooden outbuildings on the north side, brick structures were erected, and a women's gallery was added on the west side, connected with the main hall by two rectangular arcades. There was also semicircular windows on the eastern and western walls of the building. The synagogue has retained this shape to this day. The last pre-war works were carried out in 1933 under the supervision of architect Herman Gutman. A lot of maintenance work was done, the foundations and roofing of the men's room were secured, the women's room was renovated, the roof structure was replaced.

During World War II, the synagogue was significantly devastated, most of the equipment was removed or destroyed, and the forged metal bimah was probably melted down for use in the military industry. Since then, it has housed a warehouse for impregnated body bags, and a warehouse for fire-fighting equipment in the women's section.

After the end of the war, in 1945, the synagogue was provisionally secured and reopened for religious worship, although there was still a fire brigade's warehouse in the women's section. In the years 1958-1968, the synagogue was renovated and partially reconstructed.

In 2008, the strengthening of the building's structure began. During these works, a buried Gothic basement with a portal leading to it was found under the prayer room. It is probably a remnant of the medieval buildings of Kazimierz before the Jewish town was founded in this place. Simultaneously with the construction works in 2009–2012, the polychrome in the women's gallery and in the prayer room were discovered and preserved. The oldest parts of the paintings found on the northern wall of the prayer hall come from the 17th century. Since 2011, security works have been carried out in the open cellar.

Currently, the synagogue is the only Jewish house of prayer in Krakow, where services are held regularly, at times consistent with the tradition. However, they are not held every day, but on all Sabbaths, holidays and special occasions. Boaz Pash has been the rabbi of the synagogue since 2006.

The Remu Synagogue is located in the Kazimierz district of Krakow, at 40 Szeroka Street. The synagogue borders on the garden and the courtyards of the houses. It adjoins the old Jewish cemetery. The cemetery and courtyard of the synagogue are surrounded by an uneven wall covered with tiles in some places. In the wall around the courtyard, plaques transferred from other parts of Kazimierz were embedded. There are also plaques commemorating the visits of important people to the synagogue.

The synagogue is entered through a rectangular vestibule, on the northern wall of which there are plaques commemorating the anniversaries of the death of the community members from the 1930s to the 1990s. In the vestibule there is a stone treasure from the second half of the 16th century, above which there is an inscription: "The sacrifice for the peace of Remu's soul of blessed memory".

The entrance to the main hall leads through a stone portal with a wrought iron door. The prayer room is a rectangular room with a barrel vault. On the eastern wall there is an original stone Aron Kodesh from the second half of the 16th century. It is topped with a pedestal with tablets of the Decalogue. The recess is closed with wooden double doors decorated with Art Nouveau patterns. Next to the Aron Kodesh there is a chair where no one ever sits down. Rabbi Isserles is said to have prayed there. On the wall there is a plaque with the inscription: "Tradition tells us that this is where Remu stood, the memory of the righteous blessed, to pray and pour out his griefs before the saint, blessed is he".

In the middle of the main hall there is a large, rectangular bimah, which is a reconstruction of the one from before the war. It is surrounded by an openwork, wrought iron grate. The double-winged 18th-century baroque bimah door is decorated with bas-reliefs and polychromes depicting a menorah, tables for showbread, pitchers, bowls, baskets with flowers and fruit, and plant motifs. They probably come from another synagogue in Krakow and possibly served as the door of the Aron Kodesh.

On the west side, in the annex, there is a room for women with three arcaded openings in the wall. Above these arcades on the wall are paintings of the Wailing Wall, Rachel's tomb and Noah's ark. They were made in the 20th century and are the only wall paintings in the synagogue.

The Remuh Synagogue is an Orthodox synagogue and the only one in Krakow where regular services are held on Sabbaths and holidays.

It is a place visited by hundreds of tourists from all over the world as well as famous personalities. In 1968, it was visited by Cardinal Karol Wojtyła, and in 1992 - by the President of Israel, Chaim Herzog, in June 2002 by the Prince of Wales, Karol Mountbatten-Windsor.

Jews from all over the world are drawn here by the tomb of Moses Isserles (died 1572). Most leave cards with requests (that is, flourish), in the hope that Remuh will intercede with God for them. His grave is the only one in the cemetery that has not been damaged. For centuries, the Jewish community kept it in good condition. His survival during the war is attributed to his miraculous intervention - the story was repeated that a German who wanted to destroy the tombstone was struck by lightning. The matzevah has a 16th-century inscription: From Moses [the prophet] to Moses [Isserles], there was no such Moses. It proves that Remuh is held in high esteem among Jews.