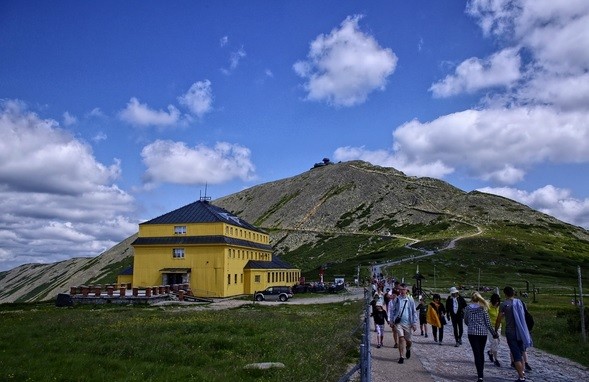 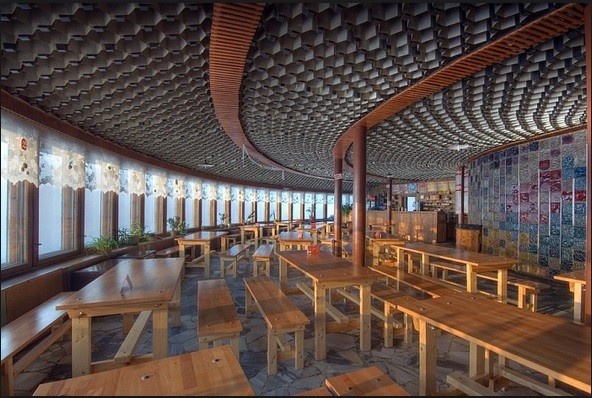 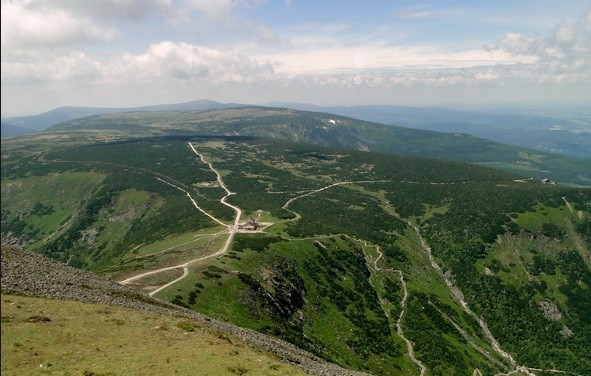 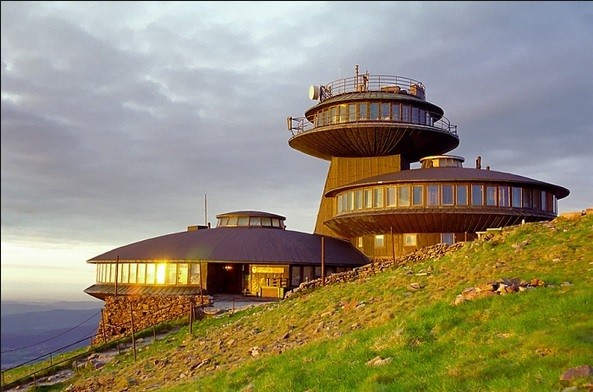 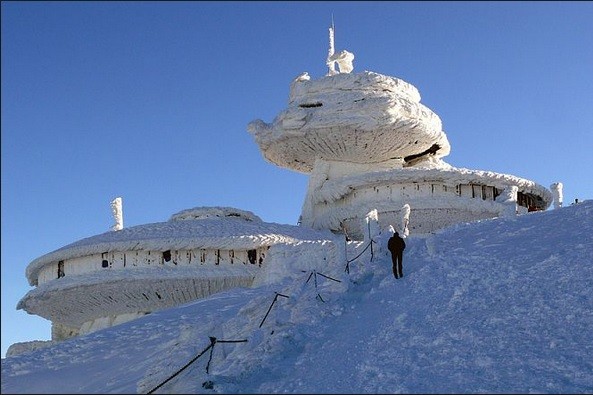 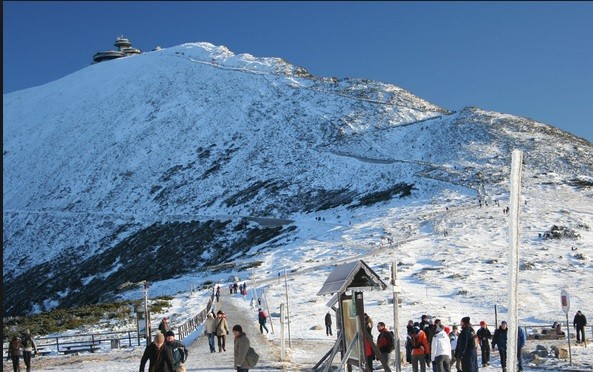 Śnieżka peak (Snow Ball) in the Sudetes range is 1602 m above sea level. The Tatra mountains were created during the Alpine orogeny, the same one which created the highest mountains in the world e.g. Europe – the Alps, Asia – the Himalayas. The Sudetes are older as they were created during the earlier Hercynian orogeny. It means that these mountains have had more time to be “spoiled”. This is the reason why these mountains are lower and their slopes are not that steep. Although, Śnieżka is the highest peak in the Sudetes climbing it means the stroll by paved road. The slope is really mild. The best proof that the road is fairly easy is the fact that it is used by the national park cars. Still, if you aren’t really into too much walking you can use the all year ski lift to Kopa pod Śnieżką and only take the final walk from there. The mountain hostel at the summit is very original. I always used to think about it as a UFO space crafts. The views from Śnieżka are the best in summer when the visibility is the clearest. Still in winter you can try some winter sports from skiing roots starting at Kopa pod Śnieżką.

Śnieżka is the highest peak of the Karkonosze Mountains and the entire Sudetes. For centuries, it has attracted tourists' attention with its shape and frequently changing weather conditions.

Śnieżka is situated at an altitude of 1 602 m above sea level. It is included in the peaks of the Crown of Polish Mountains. From its top there is a wonderful panorama of the Karkonosze range. The name "Śnieżka" comes from the nineteenth century, from the adjective "snowy", meaning covered with snow. Snow usually stays here from October until May. The state border runs along Śnieżka and half of the mountain belongs to the Czechs. From the Czech side, the ski lift reaches the top.

Over the years, several facilities have been built at the top of Śnieżka for tourist traffic, religious worship and meteorological observations. Visitors will find there, among others The High Mountain Observatory of the Institute of Meteorology and Water Management, the post office, which is the highest post office in the Czech Republic, and the Saint Lawrence Chapel, built in the years 1655-1681 by the owner of the northern slopes of the Karkonosze, the Silesian nobleman Schaffgotsch.

The meteorological observatory on Śnieżka looks like "flying saucers". The characteristic shape of the saucers is one of the hallmarks of the gable and symbol of the region. In June 2020, the building was entered in the register of monuments.

The geological structure of the mountain

Śnieżka is made of granite and its peak is made of tough rocks called hornfels. The slopes of the mountain are covered with stone run, formed during the Pleistocene glaciation, in periglacial conditions. At the same time, glacier cauldrons were created, cutting it from the northwest and south-west.

Śnieżka has a specific climate, similar to the one we observe beyond the Arctic Circle. This is what caused the formation of alpine vegetation, unique for this latitude, at lower altitudes. The average annual temperature on Śnieżka is slightly over 0 ° C, while in the warmest month - 10.6 ° C. Snow cover in winter usually lies here from October to May. High-speed winds (50-80 m / s) are blowing here and there are sudden changes in pressure, as well as special phenomena: fog, rime or St. Elma.

Tourist can climb Śnieżka on foot. There are several routes to choose from:

·        Black Trail – the shortest, but the most difficult route. Its ascent begins in Karpacz at the lower base of the lift to Mała Kopa via Biały Jar. The length of the route is approximately 5.9 km (about 2.5 hours walk). However, the trail is not very scenic and the approach here is quite steep and boring. This route is recommended for people who are experienced in mountain trips. It is not suitable for families with children and the elderly.

·        Red Trail - starts from the car park of the Orlinek hotel through the Łomniczki Valley. This route is often chosen for its beautiful views. The section from Orlik to the shelter on the Łomniczka River is very gentle and walking. Then a more difficult stage begins, leading down the path that is narrower. At this point tourist must be careful. In winter, from the shelter on Łomniczka River to Dom Śląski, the trail is not available due to the risk of avalanches. The length of the route is 6.7 km (approximately 3 hours walk).

·        Green and Yellow Trail - are routes that start in the Czech city - Pec pod Sněžkou. The trail is quite gentle. The views are very nice and in winter the approach can be made easier by crampons. The length of the route is 6.2 km (about a 3.5 hours walk).

·        Gondola lift - available only from the Czech side. Transfer from the Czech town of Pec pod Sněžkou to the very top of Śnieżka. The lift runs all year round except April and November and on windy days. The duration of the ride is 30 minutes.

·        “ZBYSZEK” cable car - cable car from Karpacz to Kopa peak (1377 m above sea level) and then about 2 hours trip to the top. It does not reach the top of Śnieżka directly. The duration of the ride is 8 minutes. On the way to Śnieżka, tourists also pass the PTTK Dom Śląski shelter.

Śnieżka is a place where tourists from all over the world visit. The beauty of its landscape and the effort of reaching the summit attract not only lovers of mountain trips. It is visited in large numbers in the summer. In winter, it is a challenge for tourists. Due to the specific climate and rapidly changing weather conditions, visitors should remember to wear appropriate clothing, and above all shoes.