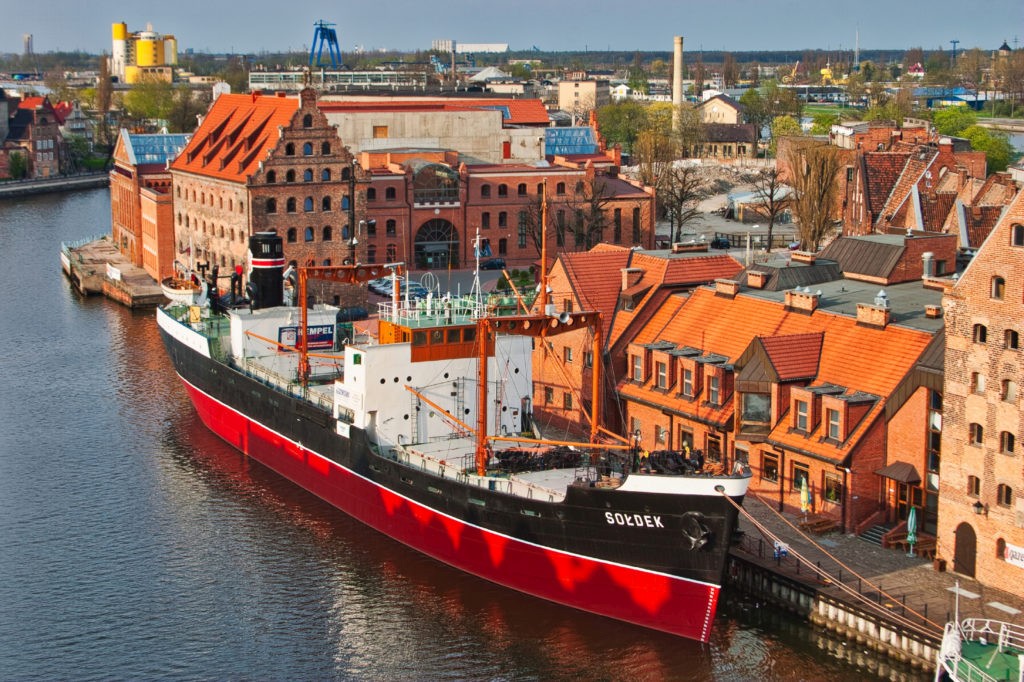 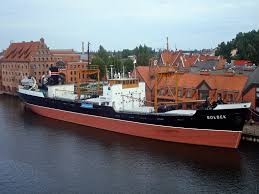 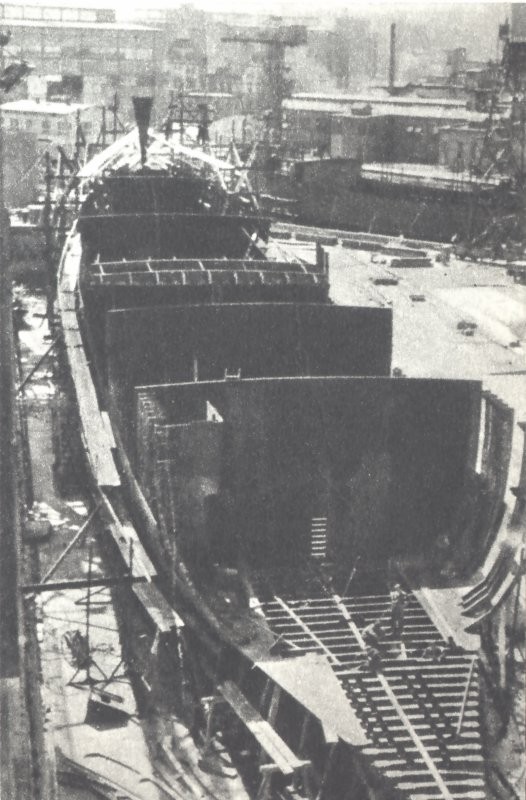 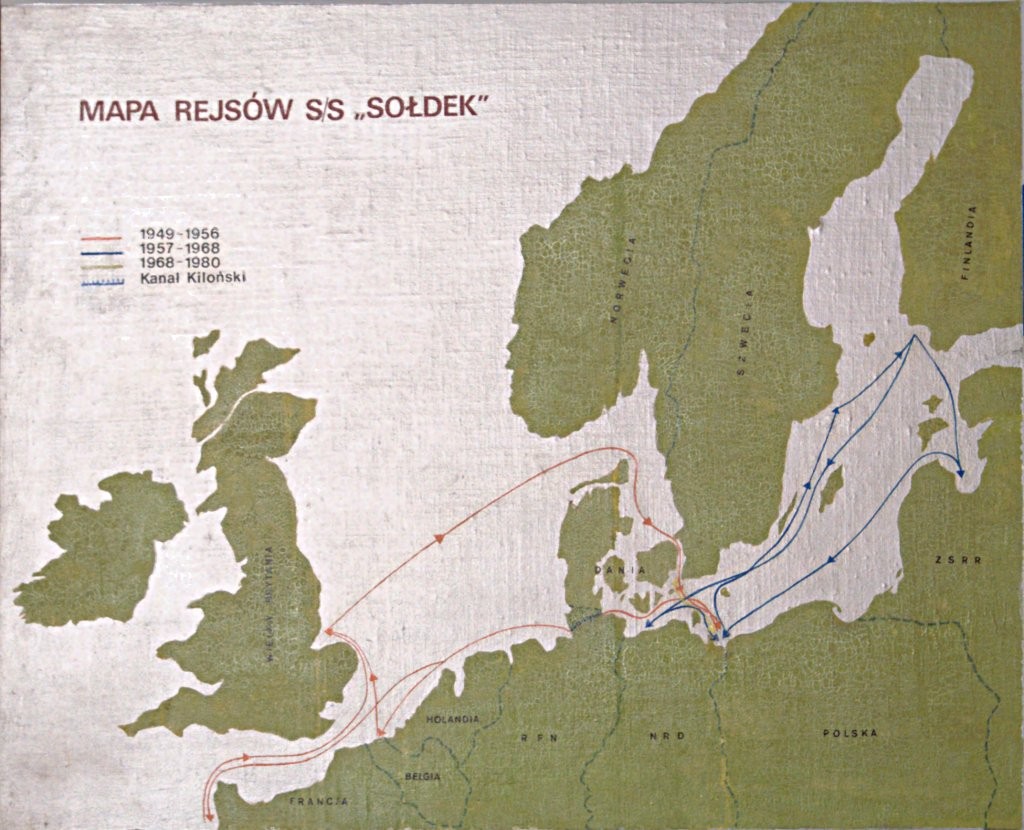 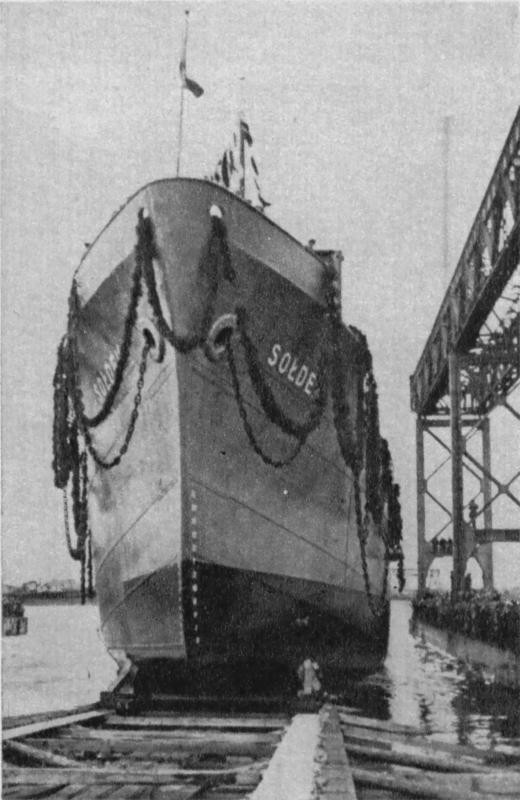 At present it is a ship-museum. It is the first ship built entirely in Poland after World War II. Up until December 1980, when it finished its duty, it went on 1478 cruises and reached 60 different ports. Currently, it is docked opposite Żuraw port crane and is one of the divisions of National Maritime Museum. Tourists may reach SS Sołdek by ferry that takes passengers between Żuraw and Ołowianka island.

Wondering through the picaresque streets of Gdansk’s Old Town and Długie Pobrzeże you might have noticed something not quite matching the local vibe. With the Motława being quite a busy river with a number of small passenger ships offering cruises or a popular among tourists Lew galleon there are, however, no large commercial vessels. Except for one. A tall red, black and white bulk carrier anchored on the east riverbank of the Motława, just opposite the Gdańsk’s Crane gate. The floating museum SS Sołdek.

SS Sołdek is a first example of a series of twenty nine B30 bulk carriers, as well as the very first seagoing vessel built entirely in Poland after World War II. All twenty nine ships were built in Gdańsk Shipyard between 1949 and 1954 with only five that stayed in Poland and the remaining ones were sold to the Soviet Union. Interestingly, three of the Polish ships were later sold and continued their service in Glasgow.

The B30 model was designed under the watchful eyes of Henryk Giełdzik and Jerzy Doerffer to carry coal and ore in ship’s four cargo holds of the total volume of 994 net registered tonnage. B30’s power unit consisted of a ML8a steam engine coupled with two Howden-Johnson boilers. This set-up produced roughly 1300 horse power and allowed for a cruising speed of 9.9 knots. The steam engine supplied by Zgoda ironworks was a feast of communist engineering at the time and was widely celebrated by the socialist propaganda.

SS Sołdek itself was launched in November 1948 and was placed in active service in October the following year. The ship was named after Stanisław Sołdek – one of shock workers from Gdańsk Shipyard, who later became a managing director of Wisła Shipyard in Gdańsk. His wife, Helena, christened the ship. This was one of rare instances of naming a ship after a living person. During its time in service SS Sołdek took to the waters of the Baltic, North and Celtic Seas and carried around 3.5 million tonnes of cargo. With its decommission in 1980 the ship was donated to the Central Maritime Museum in Gdańsk.

Today SS Sołdek is a floating museum and a part of the National Maritime Museum in Gdańsk. The display is scattered on all five levels of the ship and the visitors have a unique chance to see inside and out all the ship’s nooks and crannies. Crew quarters, cargo holds, engine room and control room are all open to the public. Entire original and vintage equipment together with instances of now non-existent technology give a small insight of how difficult the job was at the time.

SS Sołdek is open both to individuals and groups, where the maximum number of one group is 30 people. The entire tour takes roughly 60 minutes. Due to narrow passages and a great number or steep staircases the ship is not accessible for visitors with mobility limitations.

SS Sołdek is one of three floating museums in the Tri-City area. The other two, a navy destroyer ORP Błyskawica (Lightning) and a 1909 full-rigged sailing ship Dar Pomorza, are both anchored in the port of Gdynia.