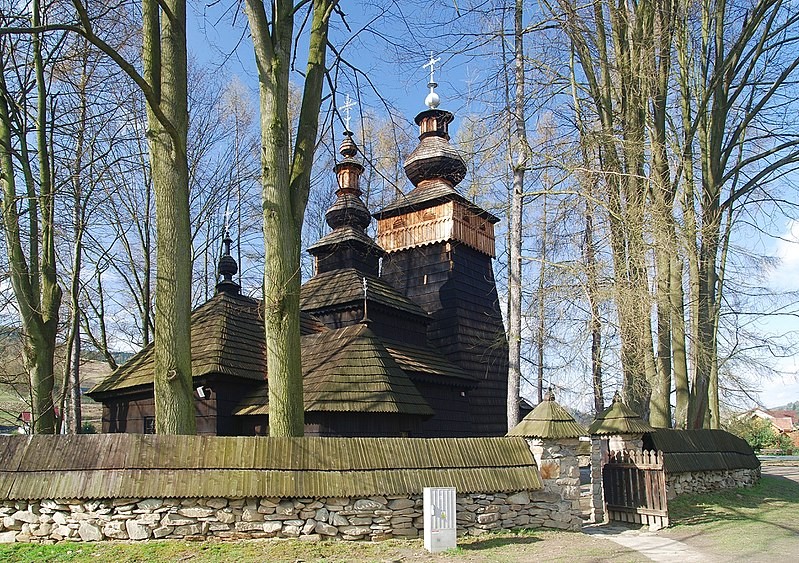 St. James Church is a Gothic, wooden church located in the village of Powroźnik. It is one of the most valuable monuments of sacred art in the Carpathian Mountains and the oldest Greek Catholic church in the Sądecki region. In 2013, it was inscribed on the UNESCO World Heritage List along with other wooden churches in Poland and Ukraine. It is located on the wooden architecture route of the Lesser Poland Voivodeship. The tserkva was probably built in 1604. This is evidenced by the inscription "Mikola Kieroznicki An Dni 1604" on the southern wall. The temple has a tripartite, single-nave layout in the Western Lemko type. Its individual parts have the terms appropriate for this type of building: sanctuary, nave, women's gallery and porch. A sacristy adjoins the sanctuary, decorated with a valuable polychrome from 1607. The central theme is the scene of the Crucifixion, above which there is the Holy Spirit in the form of a dove, and on the ceiling - the image of God the Father. The whole is therefore the image of the Holy Trinity. Below the Crucifixion is the Entombment. Other scenes include Abraham's sacrifice, Moses receiving the tablets of the Decalogue, Entry of Christ into Jerusalem. Several smaller scenes are in the form of a tondo, such as the Visitation of St. Elizabeth. In addition, the eighteenth-century iconostasis has been preserved in the church. Due to the current use of the church as a Roman Catholic church, it was cut. The original Deesis row and the row of prophets were located on the eastern wall of the nave, while the remaining icons were hung directly on the walls of the altar room. Earlier icons and deacon doors, old parts of the previous 17th-century iconostasis, have also been preserved in the temple. Other valuable icons preserved in the building are the Last Judgment from 1623 and the Lamentation of Christ from 1646. The area of the temple is surrounded by a stone wall with 20th-century statues of saints.