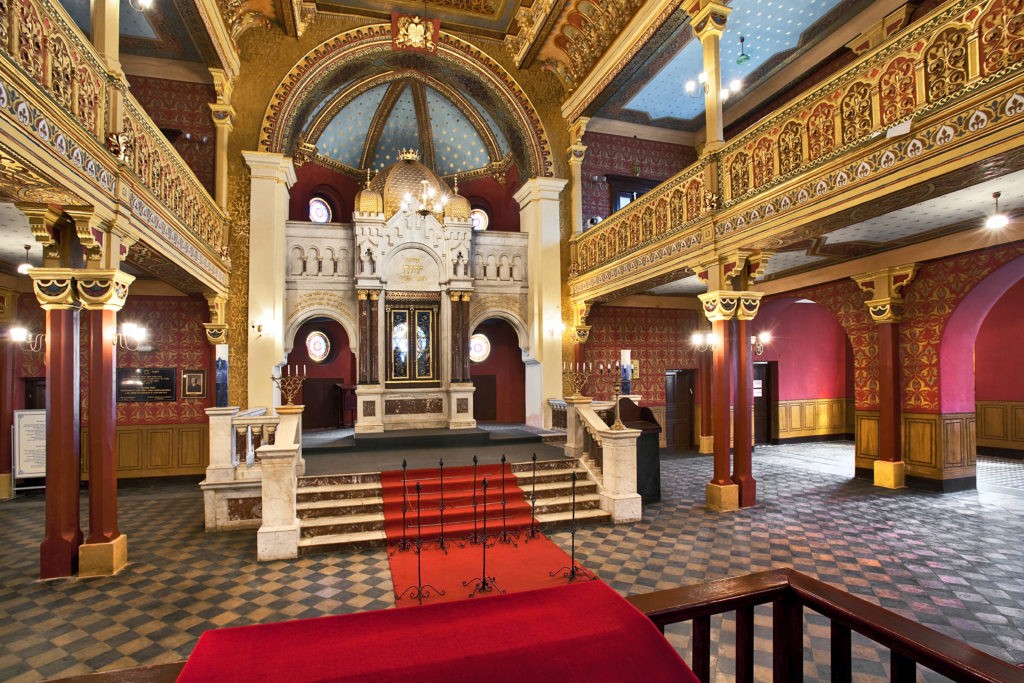 Tempel Synagogue is situated at 24 Miodowa Street, which is only 500 meters from the Old Synagogue at Szeroka Street. It is one of 4 synagogues in Kraków but services aren’t held hear on regular basis. The building was erected in 1860-1862 in a rectangle shape in a Mauritanian-Renaissance style. Later on the synagogue was rebuilt twice in 1883 and 1924. During World War II the Nazis devastated the building. After the war it become the synagogue again and regular services were held here up till 1968. In 1994-200 the synagogue was thoroughly rebuilt and it currently has lavish decorations. Tempel is not only a religious site but also Jewish heritage and culture center. Nowadays it is a place of meetings and concerts, as it can host an event for a few hundred people. Tempel Synagogue is a place really worth visiting in Kraków center.

A pearl of Renaissance Revival architecture in Kraków - Tempel Synagogue

The Tempel Synagogue is one of the most beautiful synagogues in Kraków. In the 1990s, the World Monuments Fund in New York entered the building on the list of the Jewish Heritage Program in Central and Eastern Europe

The Tempel Synagogue was built in the years 1860–1862 according to the design of Ignacy Hercok, on the initiative of the Association of Progressive Israelites and the Religious and Civilization Society. Over the following decades, it was expanded several times. In the years 1893-1894, Beniamin Torbe, in cooperation with Fabian Hochstim, added a vestibule and a new façade, and a three-sided apse and porches to the east. The interior was decorated with Moorish decorations.

During World War II, the synagogue was turned into a warehouse, but the interior did not suffer as severe losses as the other temples. After the end of the war, services were held in the synagogue again, both Progressives and Orthodox prayed there, for whom a prayer room was located in the side room of the building.

In 1947, a mikveh was built in the northern part of the synagogue. Regular services were held until 1968, only occasionally in the 1970s, and after the death of the last cantor Abraham Lesman in 1985, they ceased completely, and the closed synagogue began to gradually deteriorate.

Currently, the synagogue is open, but services are held there only a few times a year: during the Jewish Culture Festival, during special occasions or the largest religious holidays.

The synagogue building was built in the neo-Renaissance with Mauritanian components. On the façade and side walls there are two-part, arcaded windows with unique 43 colorful stained glass windows from the turn of the 19th and 20th centuries (20 in the main hall, 21 in the women's gallery and 2 in the staircases). They are the only preserved synagogue stained glass in Poland.

Over the main entrace there are Decalog Tablets of black marble. The text of the Psalm 100.4 is placed under the plaques: “Enter His gates with a song of thanks, with hymns of praise in His courtyards”.

In the center of the main hall there is a bimah and on the landing by the eastern wall there is a monumental Aron Kodesh made of white marble, surrounded by a columned balustrade, topped with a large golden hemisphere covered with a crown. Aron ha-kodesh, or the ark with the holy Torah scrolls, is located on a platform on the eastern wall and resembles a church altar.

There are seven commemorative plaques in the synagogue, four of which are in the main prayer room, one in the women's gallery, and two in the vestibule.

In the Tempel synagogue, Jewish holidays and other important celebrations are held, to which numerous guests are invited: representatives of city and voivodeship authorities, universities, representatives of various denominations, Krakow's Jewish community and sympathizers. A special event is the Days of Judaism in the Catholic Church, organized here together with the Archdiocese of Krakow. Every year the synagogue hosts the klezmer Leopold Kozłowski-Kleinman, accompanied or accompanied by his friends.

Behind the Tempel synagogue, in the part of the garden adjacent to the neighboring tenement houses, the Jewish Community Center was established, funded by Prince Charles Windsor and officially opened by him on April 29, 2008.