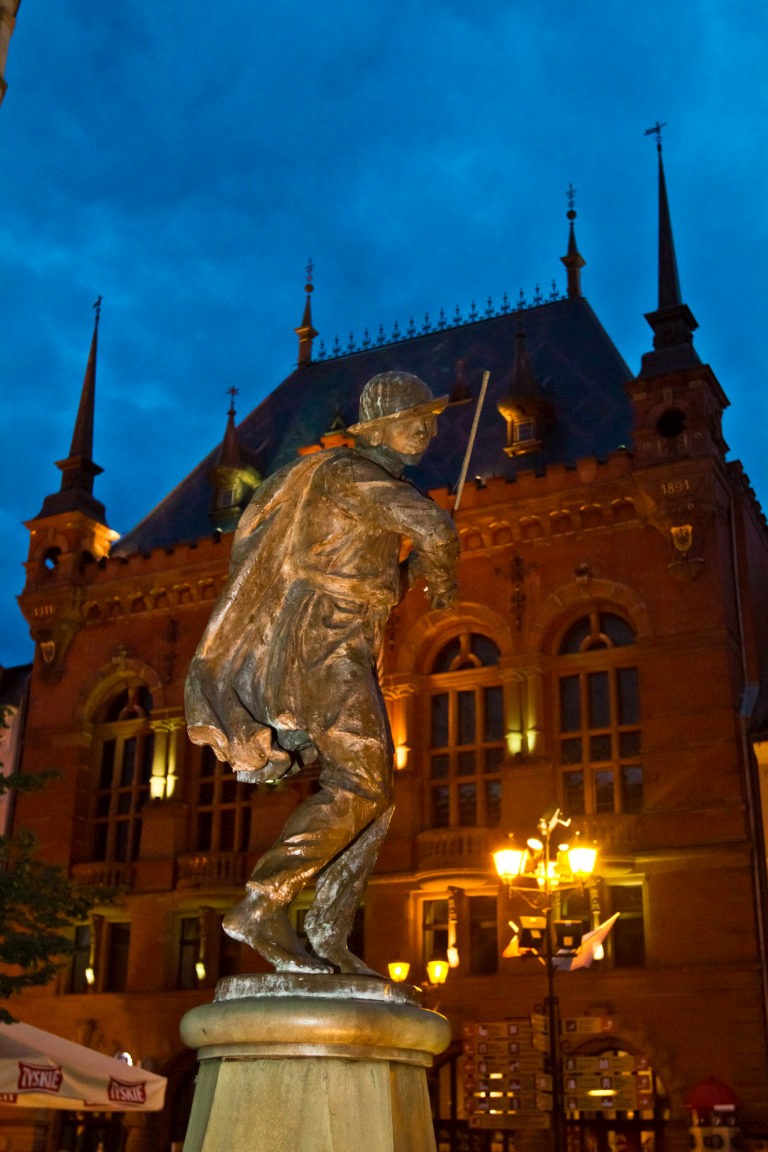 Torun (Polish: Toruń), whose Medieval urban layout is enlisted at UNESCO World Heritage List, is a well known birthplace of a famous astronomer Nicolaus Copernius. Tourist can visit both a house of his parents and also Toruń planetarium to learn more about space. Toruń is also famous for its legendary gingerbread cookies. Tourists can learn how to make them in Living Gingerbread Museum. The city can also boast a leaning tower and Teutonic Knight Castle Ruins. Tourists will also definitely enjoy stroll in the Old Town during which they can admire historic tenement houses, gates, granaries and churches. An additional attraction is also a stroll along Philadelphia Boulevard along Vistula river bank and town walls. Toruń is a city that you cannot miss if you travel through central Poland.

Toruń is one of the most valuable and beautiful medieval city complexes in Europe. It is one of the oldest cities in Pomerania and all over Poland.

Toruń is one of the most famous cities in the Kuyavian-Pomeranian Voivodeship. It is situated on the rivers Vistula and Drwęca. It ranks 15th in terms of population in Poland. It is one of the oldest cities in Poland (it received city rights in 1232). The patron of Toruń is St. John the Baptist. The city festival is celebrated on June 24.

Toruń was founded in the thirteenth century by the knights of the black cross. The Grand Master of the Teutonic Knights, Hermann von Salza, and the second master, Herman von Balk, issued the Chełmno privilege, i.e. the act of establishing the city of Toruń and the city of Chełmno. The Old Town was established. The New Town was founded in 1264. Between the two cities there are ruins of a Teutonic castle.

Toruń is mainly associated with its historical center - the Medieval City Complex, consisting of three areas established in the 13th century: the Old Town, the New Town and the Teutonic Order Castle. This areas has been inscribed on the UNESCO World Heritage List, the List of Monuments and the Canon of Historic Places. Every year, the city is visited by over 2 million tourists.

Toruń is the best-preserved medieval city in terms of the number of monuments. Many medieval buildings have survived to this day, and the residential houses preserved in Toruń constitute the largest and best-preserved complex of Gothic residential architecture in Northern Europe. The Old Town Square is the heart of Toruń. It has been the main point on the city map since the Middle Ages. Tournaments were held here, various goods were traded, but also sentences were pronounced and executions were carried out. Today, in the vicinity of historic tenement houses with colorful facades, there is the City Hall, the Artus Court, where exhibitions and concerts are held, as well as a monument to the most eminent inhabitant of Toruń - Nicolaus Copernicus.

The Gothic Town Hall is a symbol of Toruń's former glory - the town hall was once the seat of the city authorities and the court, as well as a representative place where kings were hosted. Currently, there is a Regional Museum with collections of Gothic art, old crafts and Polish paintings. The oldest part of the Town Hall is the Town Hall Tower from around 1274, raised in 1385 to the present height of 40 m. From the top of the tower there is a picturesque view of the Old Town, the Vistula River and more distant parts of the city.

When entering the courtyard of the Town Hall, it is worth paying attention to the windows where there are figures of various characters. Some say that these figurines are to resemble the former inhabitants of Toruń, others say that one artist once created such a figurine and put it in the window, while others liked it and began to follow this trend. There are also many different sculptures and monuments in the city, such as the Toruń Dragon, Filuś the dog, Street Vendor of Toruń (Toruńska Przekupka), Donkey and many others ...

The St. Mary's Church, towering over the city, is an example of Gothic architecture. It is one of the three largest churches in northern Poland. Also noteworthy are: St. John the Baptist and John the Evangelist. At the Cathedral of Saint John the Baptist, visitors will have the opportunity to see the famous medieval bell Tuba dei, as well as Digitus Dei - a medieval clock with one hand.

A few minutes walk from the Old Town are the ruins of the Teutonic Castle. The castle consisted of a high castle, the ruins of which have survived, and a few outer baileys, of which little has remained. Only two mills have survived, which were transformed into a hotel and a building known as infirmary, i.e. a religious hospital and a dansker. The ruins and the underground are available to visitors, where there are, among others an armory, an archeological exhibition or a model of a castle.

Near the ruins is the Philadelphia Boulevard. It runs along the Vistula river bank. The boulevard is a great place for long walks, meeting friends or jogging. On the other side of the boulevard, there is a viewpoint called Kępa Bazarowa, from which, especially in the evening, when Toruń is illuminated, there is a spectacular view of the city and defensive walls.

Coming back to the Old Town, it is worth seeing the Leaning Tower. It was built at the turn of the 13th and 14th centuries by the Teutonic Order from Toruń. The tower is inclined approximately 1.5 meters from the vertical, due to the unstable ground on which it was built.

The famous astronomer, Nicolaus Copernicus, was born in Toruń. The house where he was born now houses the Copernicus Museum. In its interiors, visitors will learn not only about Copernicus, but also learn a lot about the history of Toruń, astronomy and bourgeois life. Toruń Planetarium is also connected with atronomy. It is one of the greatest attractions of Toruń. Shows about the universe are presented on the huge dome. During the screening, visitors can see, for example, the Earth from the Moon or experience the polar night at the Pole. The planetarium is located in the circular building of the former gas tank.

The list of attractions in Toruń is very long. The Toruń History Museum at the Esken House, the Ethnographic Museum, the Modernity Center "The Mill of Knowledge", the House under the Star are also worth visiting.

Toruń is an excellent starting point for a bicycle ride. In the vicinity of the city visitors will find a lot of interesting routes, e.g. towards Ciechocinek or the Vistula Bicycle Route.

Toruń is also an academic, scientific, cultural and tourist center. There is a symphony orchestra in the city as well as theaters, cinemas, numerous museums and art galleries. Every month, Toruń hosts an average of one hundred different kinds of cultural events, ranging from festivals, concerts, exhibitions, theatrical performances, poetry and photography reviews, to outdoor historical shows.