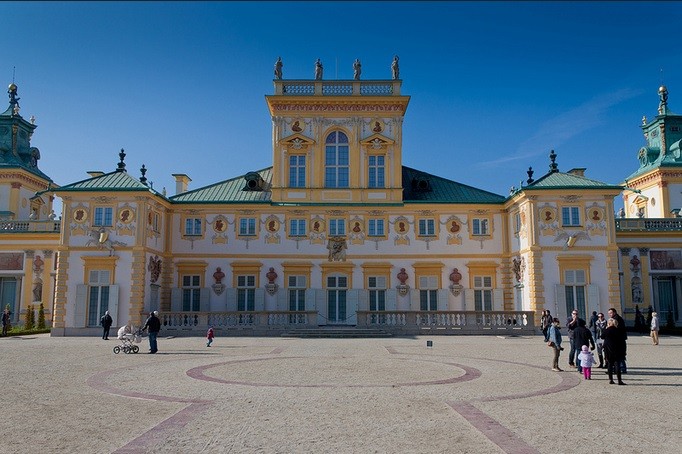 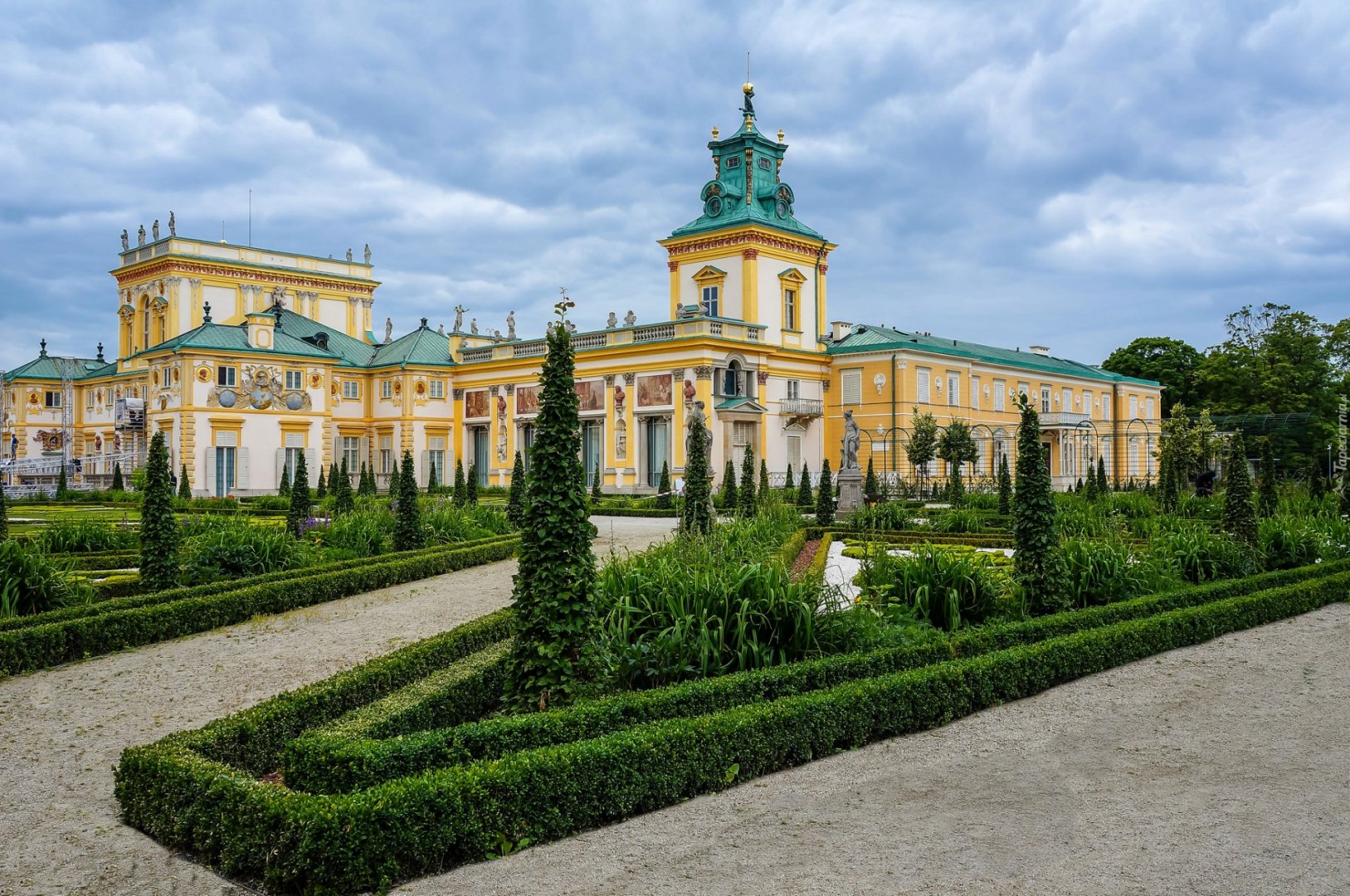 The Wilanów Palace, together with its garden, is one of the most beautiful objects of its type in Poland. Baroque palace and the meticulously designed surrounding gardens, situated at the end of the Royal Road and built for the king John III Sobieski, are filled with Polish as well as European culture. Wilanów hosts many exhibitions and concerts, including the International Summer Early Music Academy. The Wilanów Palace also houses one Poland’s first ever museums, established in 1805.

A themed walk around the palace and gardens in English.

The Palace in Wilanów is one of the most beautiful and most visited in Poland. Beautiful, majestic, it delights with its wonderful architecture and atmosphere from hundreds of years ago. If you want to feel like in a fairy tale, be sure to visit this magical place.

The palace was erected in the years 1681-1696 for King Jan III Sobieski and Maria Kazimiera. The author of the design was Augustyn Locci. Initially, the building was a typical, one-level suburban aristocratic residence, which did not stand out among such facilities. Tylman van Gameren, a very talented Dutch architect, was responsible for the extension and decoration of the Wilanów palace.

In 1696, after Sobieski's death, the palace became the property of his sons. Unfortunately, as a result of a conflict between them, the residence was stripped of all furnishings and all movables - windows, doors, fireplaces.

24 years later, the youngest son of Sobieski, Konstanty, sold the building to a very wealthy noblewoman, Elżbieta Sieniawska, who renovated and expanded it. In the years 1723–1729, the palace was added to, among others, side wings.

Over the following years, the palace changed owners many times. In 1892 it became the property of Ksawery Branicki and remained in the family until 1945. The last owner was Adam Branicki.

After World War II, it was taken over by the state, and in 1962 it was opened to the public. Since 1995, the palace and the palace and park complex have been managed by the Museum of King Jan III's Palace in Wilanów.

The building is entirely baroque and is a harmonious combination of European art and old Polish building tradition. The painterly and sculptural decor of the facade and palace interiors has been preserved, which, in reference to ancient symbolism, proclaims the apotheosis of the Sobieski family and the glorification of the king's military successes. The interiors of the palace were decorated by the most outstanding artists of their time, including: Józef Szymon Bellotti, Jerzy Siemiginowski-Eleuter, Michelangelo Palloni, Claude Callot, Jan Samuel Mock, Francesco Fumo, Pietro Innocente Compareti, and Eliasz Hofmann.

The decorations in the façade shields were made by Francesco Fumo. An interesting element of the facade are inscriptions and statues referring to the bravery, justice and power of Jan III Sobieski. On the front elevation there is the inscription "Quod vetus urbs coluit, nunc nova villa tenet", meaning "What the ancient city of Rome worshiped, now has a new villa". A golden sun shines proudly above it, highlighting the Sobieski coat of arms, supported by another inscription "Refulsit sol in clypeis", meaning "The sun has shone on the shields".

In the palace its seat has, established in 1995 as a result of the separation from the National Museum in Warsaw, the Museum of King Jan III's Palace at Wilanów.

As part of the tour, visitors will have the opportunity to see:

- the White Room with images of successive owners of the palace (including King Jan III and other representatives of the Sobieski family). The initiator of its creation was King August II the Strong of the Wettin dynasty. It was established in 1730. It is the largest interior of the entire palace and the most representative.

- North and South Gallery. Their original character was the form of cloisters open to the garden.

- Library, Antykamera (former hall), King's Bedroom and Chinese Cabinet. These are the private rooms of the ruler, in which the Polish king stayed with his relatives most often, and it was here that he received his guests.

- Dutch Cabinet. Its task was to properly display the works of Dutch brush masters, including Rembrandt himself.

- Queen Marysieńka's apartments. The apartments are one of the palace's most impressive attractions, as Wilanów was built with her in mind. Marysieńka had to have the right setting and her rooms clearly show that she got one.

- Chinese and Hunting Rooms. Their decorations come from the end of the 19th century, and the interiors were arranged inspired by oriental art.

- Warehouse Gallery. Valuable works of art are on display here.

- Locci rooms. These are the rooms of the builder of the Wilanów Palace.

The historic park surrounding the palace covers 43 hectares and represents various styles. Together with the palace, it forms a complete park and palace complex. It was established in the second half of the 17th century as the palace garden of King Jan III Sobieski. Like the castle, the garden was modified and transformed many times by successive owners.

The park has been divided into several parts. One of the most beautiful is certainly the Akademosa Grove, which is located in the north-west part of the park. In the grove you can see the monuments of 2 great Polish artists: Jan Kochanowski and Franciszek Karpiński.

In the eastern part of the park there is a Baroque Italian garden with as many as 21 baroque sculptures checked for the park after World War II from the vicinity of Oława to replace the sculptures taken from Poland by the Germans.

The neo-renaissance style is represented by the so-called Rose Garden.

There are also some interesting objects in the park. These are i.a. a Chinese gazebo was erected at the beginning of the 19th century, erected in the mid-18th century and rebuilt a century later, the Orangery, the Pump House building, Stanisław Kostka Potocki's sarcophagus, the Monument to the Battle of Raszyn and the neo-Gothic gate built in 1846 according to the design of Henryk Marconi.

The Royal Garden of Light

The Royal Garden of Light is an autumn-winter exhibition that illuminates the garden at the Wilanów Palace. It is an open-air exhibition where thousands of colored LEDs are arranged in sophisticated shapes. A 75-meter luminous tunnel in which classical music resounds leads to the palace. In addition, there are also mappings - three-dimensional shows on the facade of the palace. The exhibition is even more popular than the palace interiors themselves. The shows are prepared with considerable panache and care. The light shows shown on the facade of the building will allow us to move in spirit, at least for a moment, to Wilanów from the times of Jan III Sobieski and feel like at the royal court.