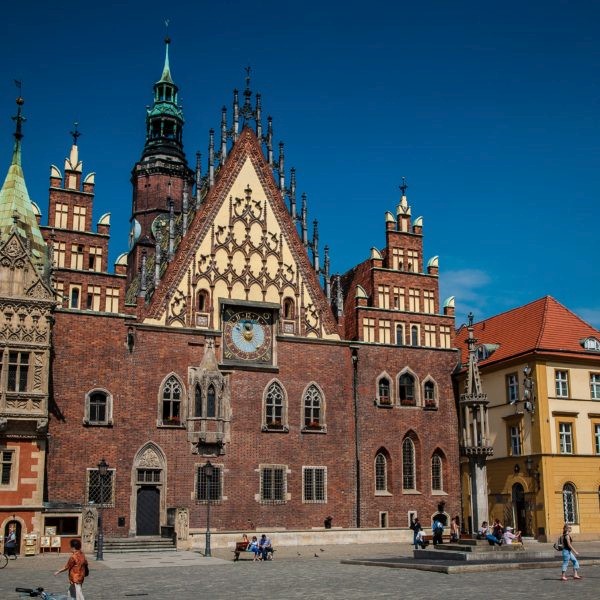 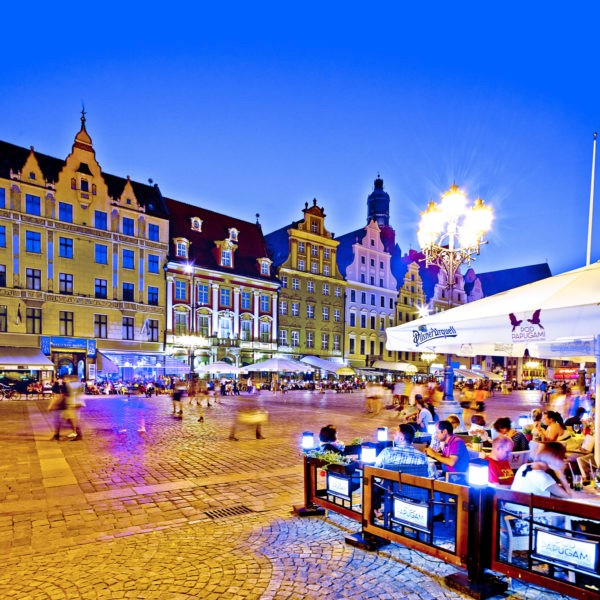 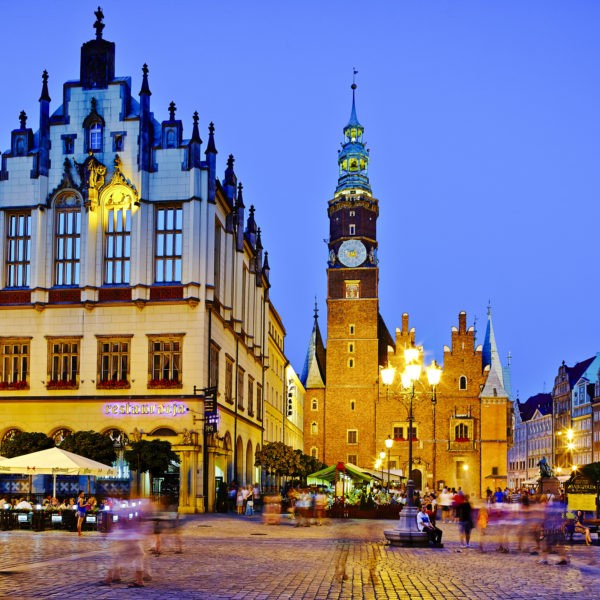 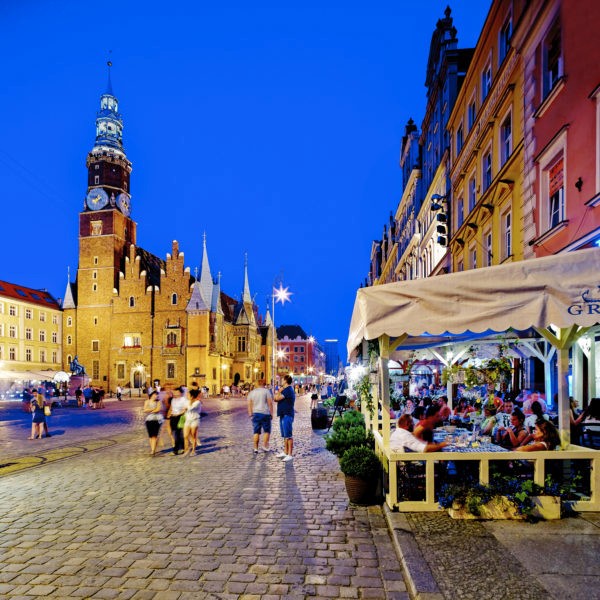 The Old Market Square in Wrocław has almost 3.8 hectare and is one of the biggest old squares in Poland (after Kraków and Olecko) and Europe. It is a rectangle of 213 and 178 meters. In the centre of the square there is a big Town Hall with 66 m tower, which is the biggest in Poland. Around the market there are 60 decorative, historic tenement houses. In the basement of the Town Hall there is Piwnica Świdnicka restaurant. It is one of the oldest gastronomy points in Europe. The Town Hall is currently a city’s museum. On the market square tourists can find Aleksander Fredoro monument (one of the most famous Polish comedy writers), a whipping post and a modern fountain. The Market Square is a place of Christmas fairs, New Year’s parties and religious, academic and army celebrations and a beating heart of Wrocław for all tourists.

The Wrocław Old Market Square covers almost 3.8 hectares and is one of the largest in Poland. This is a must-see point on the lists of places to visit for all tourists coming to Wrocław.

According to the latest research, the beginnings of the Wrocław market date back to 1214–1232, when Henry the Bearded was the prince of Wrocław. Over the years, tenement houses began to appear around the square, and a little over a hundred years later, the final form of the square's frontage was created, which, despite numerous changes and reconstructions that took place here over the centuries, remains largely unchanged until today.

Originally, the market served as a marketplace - bread, fats, linen, metals and clay products were traded here. There were also craftsmen in the Market Square, who had their stalls here, where they could use the services of shoemakers and tailors. Particular streets took their name from the specialties of craftsmen whose stalls were located in various parts of the city surrounding the Market Square. The streets: Szewska, Białoskórnicza and Jatki, which were the seat of butchers and the place where meat and offal were sold, have survived to this day.

The market was also a place of performing physical punishments, such as flogging, depriving - depending on the offense - hands or other parts of the body, as well as beheading with an ax or sword, or hanging prisoners.

Currently, the Wrocław Market Square is teeming with life all year round, every day and night. It is a place of meetings, dates and concerts. Almost every tenement house has a pub, cafe or restaurant. In summer, the market square is filled with fire eaters, dancers, actors and acrobats, and more.

The Wrocław Market Square covers almost 3.8 hectares and is one of the largest former fairgrounds in Poland (larger markets are only in Krakow and Olecko). It is 212 meters long and 175 meters wide. The market square is surrounded by historic tenement houses.There are as many as 11 streets to the Market Square in Wrocław. The buildings surrounding the Market Square are made of buildings from different historical periods. The Solny Square adjoins the market square, with, among others, a former department store and the famous pharmacy Pod Murzynem.

The market square in Wrocław is a place of Christmas Markets, New Year's Eve events, religious, academic and military celebrations. In 2012, on the occasion of the European Football Championship, the Market Square was a huge fan zone, in which up to 30,000 spectators could enjoy themselves.

The most important monuments on the square

The Old Town Hall is located in the very center of the Market Square. Its construction took about 250 years. It was the seat of the municipal authorities and the court. Its decoration is the 66-meter-high tower with a clock that strikes the quarters of an hour and the hour. The clock consists of as many as 5 clock faces - 4 dials are on the tower, the fifth dial is placed on the facade of the Old Town Hall. Currently, the Old Town Hall is a branch of the City Museum of Wrocław. There is a museum of the Towns' Art, where you can see, among other things, an exhibition of kerosene lamps or busts of famous Wrocław inhabitants. In the first half of the nineteenth century, the New Town Hall was built, to which the city authorities moved. Today, the mayor of Wrocław has his office here, and meetings of the City Council are also held here. In the southern part of the town hall there is a vaulted entrance to one of the oldest active eateries in Europe, Świdnicka Cellar. As early as in the 12th century, in the cellars of this building there was a storeroom with beer and wine. The beer was transported through a hidden tunnel under the market square straight to the restaurant all the way from the port on the Odra River.

The pillory in Wrocław used to be the place of execution and enforcement of justice by the court located in the Old Town Hall. The culprit was tied to him and left for several hours, scourged or executed (depending on the fault). It is a reconstruction of a stone pillory from 1492. It is made of sandstone by the famous Saxon sculptor Preussey. Today it is a meeting place, especially for guided tours.

Another interesting object of the Wrocław Market Square is the monument of the Polish comedy writer Aleksander Fredro, which was brought from Lviv after the war. Earlier, a monument to Frederick William III of Prussia, which was removed in 1949, stood here. It is the most famous and oldest Polish monument in the city. The monument presents a silhouette of a poet sitting on a chair. He holds a scroll in one hand and a quill in the other, which was once stolen by students from Wrocław. The monument is situated on a sandstone plinth covered with inscriptions on three sides.

The Cloth Hall, also known as the Merchants 'House, is a building that used to house merchants' chambers. Cloth and other precious materials were traded here. There were forty merchants' chambers here. The two-nave hall was about 100 m long, with 21 chambers on the north side, and 19 chambers on the south side, without windows and connected to the hall only by doors. The passage between the stalls was thirteen meters.

The largest number of dwarf figures can be found in the Wrocław Market Square and in its immediate vicinity. They are one of the symbols of Wrocław. They live in all parts of the city. In the second half of 2020, there were around 360 of them. These oldest dwarfs are located on the Wrocław market square. A trip in search of dwarfs is a great way of visiting the city with young children, for whom this form of entertainment will make sightseeing no longer boring. Maps with dwarfs in the Wrocław market square can be bought in any good souvenir shop, and there are quite a lot of them around the market square.