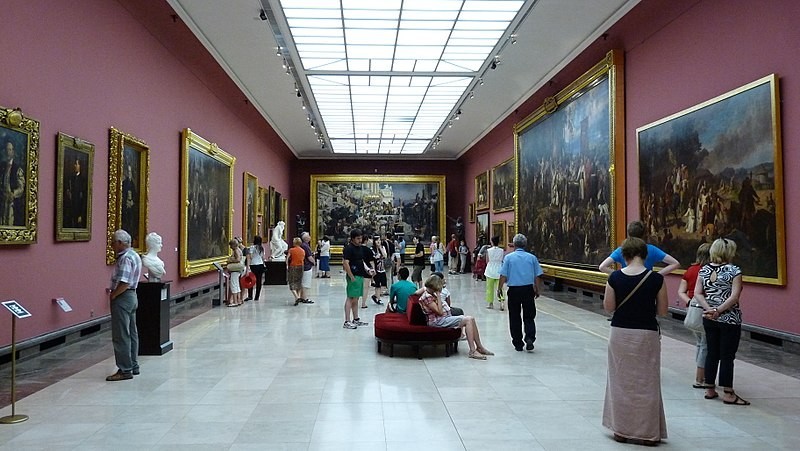 Once in a while we have a great pleasure to organize long thematic trip for one of our groups. It is something we really enjoy as it gives us the opportunity to create something unusual and extraordinary. We want to share some details of this kind of trip we made some years ago. It was a group of 57 elderly art lovers from France. They spent 11 days in Poland in September. They came to us with quite specific program in mind that we just made more doable in terms of time and convenience. Still, they were very ambitious and their program was just packed with attractions.

On the second day, they visited the Old Town in Warsaw and churches on the outskirts. They saw Royal Castle, the Church of St. Martin in Gothic style, Our Lady of Grace, the Church of the Holy Spirit, St. James, St. Casimir and the main square. They saw all the monuments connected to famous Polish composer Frederic Chopin: Church of the Holy Cross, Chopin Museum in Ostrogskich Palace and have evening concert of Chopin music in Ogród Saski. There was also a walk in Royal Baths Gardens, "the palace on the water", the Island Theatre, Orangery, White House, Grand Pavilion, Temple of Diana and Chopin Monument.

Day three brought us a visit in Żelazowa Wola Chopin’s manor and Nieborów Palace and Arkadia Park sightseeing just on the outskirts of the capital. Next day in the morning the group visited Warsaw Uprising Museum and continued to Gdańsk to see the Old Town: old main gate of the city, Golden Gate, Długi Targ Street, Armory, Upper Gate, Tower of Torture,'s Court House, City Hall. They finished with a walk along Motława River with restaurants and cafes and admiring famous Gdańsk’s Crane.

Next day they were transferred to Malbork Castle (UNESCO World Heritage List) and then moved to Toruń. Their Toruń plan included Torun Old Town: the Main Square, the Town Hall built in the 14th century, Artus' house, Copernicus House, the Church of the Virgin Mary, Leaning Tower and Saint Johns Cathedral.

Then they moved to Poznań. They had sightseeing of Poznań Cathedral, Old Town with city hall and square and after lunch they were transferred to Wrocław. Next there was Wroclaw guided tour of the "Polish Venice" visiting bridges and overpasses covering the Odra River channels. In the Old Town they saw: Town Hall, the cathedral, the university, (the Golden Sun) building, the Church of the Holy Name of Jesus, Ossolineum and Dunikowskiego boulevard. Finally, National Museum with Racławicka Panorama, the portal of the church of St. Mary Magdalene and Hansel and Gretel House.

On the seventh day the group moved to Kraków and saw Wawel Royal Chambers and Cathedral, Franciscan church, Collegium Maius courtyard only, St.Mary Basilica, Townhall Tower, Cloth Hall Museum, and St.Adalbert Church. Next day was much calmer with a trip to Dunajec rafting and sightseeing of Niedzica Castle. In the evening the group had special dinner with live klezmer music in traditional Jewish restaurant Klezmer Hoist in Kraków’s Kazimierz District.

On the tenth day, the last full day of sightseeing the group travelled to Sandomierz and Zamość. In Sandomierz they saw City Hall, the home of Jan Dlugosz, Gothic church of St. Jacob, Gostomianum College and Opatowska Gateway. In Zamość there were Armenian houses, cathedral, synagogue, Academia Zamoyski Palace, Arsenal, Franciscan Church and city hall in their plan. In the evening there was a farewell dinner in a traditional inn with dancers and musicians.

On the last day, they planned 2 h Lublin sightseeing. They saw Lublin Palace, Holly Trinity Chapel, Underground Rout, Cathedral and Pod Fortuną Basement. Then they headed to Warsaw Airport and their plane back home.

All in all, it was definitely the most ambitious plan we have ever performed but the group members were in rapturous about all its elements and didn’t mind such fast pace of the whole trip. We, ITS Poland employees, were really proud that we could help in such an ambitious enterprise.