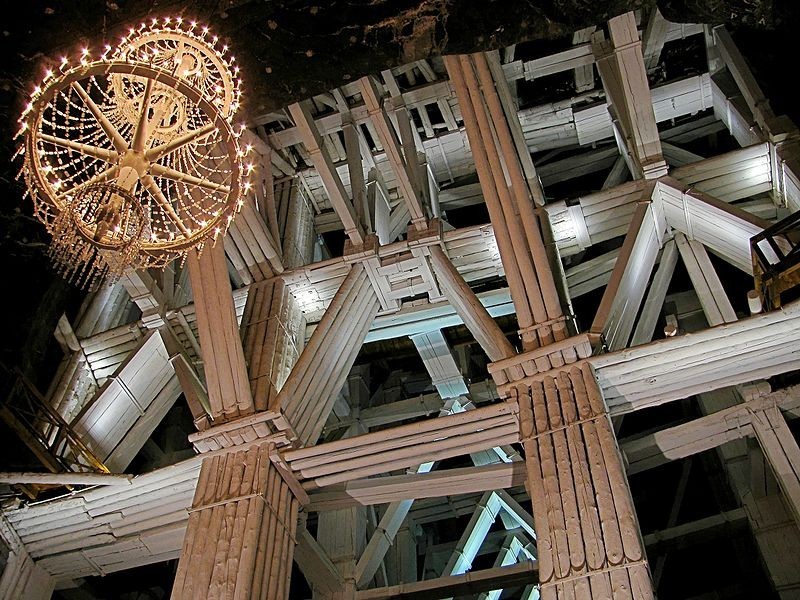 Lots of our groups often say that they want to see the mine with underground lakes. This is how Wieliczka Salt Mine is usually described. Still, Kraków area is really interesting in terms of underground attractions. This is how our another interesting trip came to being. It was organized for geography students and apart from sightseeing standard tourist attractions of Kraków they also explored underground geological marvels. First of all, Kraków area is very rich in salt. Here groups, first of all, visit Wieliczka salt mine which is enlisted at UNESCO World Heritage List. Apart from beautiful salt chambers and statues it also has underground salty lakes which are really beautiful. Modern technologies used in the mine also make sightseeing unique. Not far from Wieliczka there is Bochnia salt mine, also enlisted at UNESCO list. It has different character as it doesn’t have lakes but it has other marvels such as underground sports playing field and extremely long slide. The group also travelled to two slightly further points: Guido Coal Mine in Zabrze (1 h 15 min drive from Kraków) and Historic Silver Mine in Tarnowskie Góry (1 h 30 min drive from Kraków) also enlisted at UNESCO World Heritage List. Guido Coal Mine thoroughly shows the techniques of coal mining during the years. It offers exhibitions at two mine levels 170 m and 320 m underground. One of the most interesting attractions of Tarnowskie Góry mine is underground cruise on a boat in the Black Trout Adit. Our group also visited Jurassic region just north of Kraków and Ojcowski National Park. There they were able to explore Łokietka Cave. All in all, it was an extremely interesting week spent with Kraków attractions and amazing geology course that we can recommend to all students interested in geography and geology.