12 most precious paintings in Poland and where to find them

Leonardo da Vinci, Rembrandt, Monet, El Greco are the names that doesn’t need to be further introduced when we compose an article about famous works of art in Polish museums. Still, Polish authors such as Matejko, Chełmoński or Gierymski may come as a surprise for our foreign visitors. Spend some time with ITS-Poland DMC to discover 12 most precious paintings in Polish art collections.

12 most precious paintings in Polish collections:

Lady with an Ermine

Lady with an Ermine by Leonardo da Vinci (Polish: Dama z Gronostajem) is probably the best well known painting in Poland and definitely the main artistic symbol of Krakow. Dated to c. 1489–1491 the work is painted in oils on walnut panel. The portrait's subject is Cecilia Gallerani, painted at a time when she was the mistress of Ludovico Sforza, Duke of Milan, and Leonardo was in the Duke's service. It is one of only four surviving portraits of women painted by Leonardo, the others being Ginevra de 'Benci, La Belle Ferronnière and the Mona Lisa. The Princes Czartoryski Collection including this painting, was sold for € 100 million on the 29th of December 2016 to the Polish government. It is now displayed at the lately renovated Czartoryski Museum in Kraków, and is one of Poland's national treasures.

The Last Judgement by Hans Memling (Polish: Sąd Ostateczny) is a triptych attributed to Flemish painter Hans Memling and painted between 1467 and 1471. The triptych depicts the Last Judgment during the second coming of Jesus Christ. It is now in the National Museum in Gdańsk.

Landscape with the Good Samaritan

This painting by Rembrandt van Rijn is a 1638 oil on oak panel painting. It is one of only six oil landscapes by the artist and with The Girl in a Picture Frame and The Scholar at the Lectern, it is also one of only three Rembrandt paintings in Polish collections. It shows the parable of the Good Samaritan from the Gospel of Luke. It is now displayed at the lately renovated Czartoryski Museum in Kraków, and is one of Poland's national treasures.

The painting (title in French: La plage à Pourville, soleil couchant) is a painting by French artist Claude Monet. It is the only canvas by Claude Monet in Polish collections, painted in 1882, depicting an impressionist vision of a beach in Pourville (part of Hautot-sur-Mer), in the north of France, in Upper Normandy. The painting is displayed in the National Museum in Poznań. The value of the canvas, according to various sources, is estimated at $ 1-7 million.

Ecstasy of Saint Francis is the museum title of oil painting depicting Saint. Francis of Assisi, who is officially credited with the authorship of the Spanish painter of Greek origin Dominicos Theotokopulos, known as El Greco, on the basis of the opinion of the commission of the Ministry of Culture and Art in 1974. The art of the devoutly El Greco was meant to uplift the soul. It is the same with the Ecstasy of Saint Francis. The depiction of a saint receiving stigmas is infused with ecstatic mysticism. The work, accidentally discovered in 1964 is in the collection of the Diocesan Museum in Siedlce, and was only publicly displayed forty years after its discovery.

The Girl in a Picture Frame

It is a 1641 oil on panel painting by the Dutch artist Rembrandt. It is also known as The Jewish Bride and The Girl in a Hat. With The Scholar at the Lectern and Landscape with the Good Samaritan, it is one of three Rembrandt paintings in Polish collections. The sitter is framed by a feigned picture frame of which only the bottom and right side are visible. She wears a dark red, velvet dress, a black hat and pear-shaped pearl earrings. It is currently located at the Royal Castle in Warsaw.

The Battle of Grunwald is a painting by the Polish best well known history painter Jan Matejko. It depicts the Battle of Grunwald and the victory of the allied Crown of the Kingdom of Poland and Grand Duchy of Lithuania over the Teutonic Order in 1410. The canvas dates to 1878 and is one of the most heroic representations of the history of Poland and Lithuania. The epic painting is huge as it has 42.7 square meters and weighs 290 kilograms. It is displayed in the National Museum in Warsaw.

Stańczyk (Jester) during a ball at the court of Queen Bona in the face of the loss of Smolensk) is a painting by Jan Matejko finished in 1862. This painting was acquired by the Warsaw National Museum in 1924. It is one of Matejko's most famous works and the one that launched him to fame. It has been described as one of the most recognizable paintings in the Warsaw National Museum, and is a flagship painting for the "Collection of Polish paintings prior to 1914". Its primary component is the contrast between the solemn jester and the lively ball going on in the background. The painting has created an image of Stańczyk that has become iconic and widely recognized in Poland.

The work of art by Józef Chełmoński (Polish: Babie Lato) is an 1875 oil painting by Polish Realist painter. It is considered one of the artist's most acclaimed works and is currently displayed at the National Museum in Warsaw. The painting depicts a young barefoot Ukrainian peasant woman lying in the middle of a pasture and lifting her right hand in which she holds threads of gossamer. Indian Summer was meant by Chełmoński to represent the power of the countryside and the vitality of its inhabitants. Today, it remains one of the most popular and most frequently reproduced works of art in Poland.

The painting (Polish: Bociany) by Józef Chełmoński from 1900, made with the use of oil technique on canvas is displayed in the National Museum in Warsaw. Chełmoński shows the countryside from its unattractive, everyday side, even ugly for some. He captures the character of the moment. "Storks" is an image that has always touched Poles, being in a way 19th-century Poland (still non-existent on the map at the time) in a nutshell. No wonder that for years it could be seen everywhere - on postcards, posters, in Polish language and history textbooks (not to mention art).

Jewess with the Oranges

The painting (Polish: Żydówka z pomarańczami, Pomarańczarka, Przekupka z Pomarańczami) is an 1880-1881 oil painting on canvas by the Polish artist Aleksander Gierymski. It was painted in oil technique in 1880-1881 in Warsaw. The painting shows a Jewish shopkeeper, whom the artist immortalized in another image Jewess with Lemons. Gierymski's painting has gained considerable publicity in recent years due to the history he went through (it was stolen as many Polish works of art during WWII and recovered only in 2010). The painting is displayed to the National Museum in Warsaw, where it can be seen together with other works by Gierymski in the Gallery of 19th Century Art.

The cycloramic painting (Polish: Bitwa pod Racławicami) was painted in 1893–1894 by a team of painters led by Jan Styka and Wojciech Kossak. The oil painting shows the Battle of Racławice (1794), one of the episodes of the Kościuszko Uprising and the victory of the Polish army under the command of General Tadeusz Kościuszko over the Russian army under the command of General Aleksander Tormasov. It is displayed in a building especially designed for this one painting in Wrocław – Panorama Racławicka Rotunda. The painting was painted on a sailcloth, imported from Belgium, 15 meters long, sewn together and stretched on a special steel scaffolding. The canvas of 120 meters by 15 meters (of which the painting space is 114 meters long and 15 meters high), i.e. 1800 square meters of fabric, was used for the painting. Priming canvas used 750 kg of paint. The exhibition, apart from the painting itself, includes decorations placed in front of it and illuminated so that the viewer looking at it unfolded and closed in a ring cannot distinguish where the objects placed on the floor in front of the painting end and where the painting itself begins.

Poland has many precious works of art. This is why it is especially worth to visit National Museums in Warsaw, Krakow, Gdansk, Wroclaw and Poznan. No reproduction can give you such aesthetic pleasure as personal meeting with the original. If any of these world famous works of art caught your interest contact one of ITS-Poland group advisors that will help you to organize all your trip details. We also invite you to read one of our other articles devoted to Art Galleries and Art Museums in Poland. 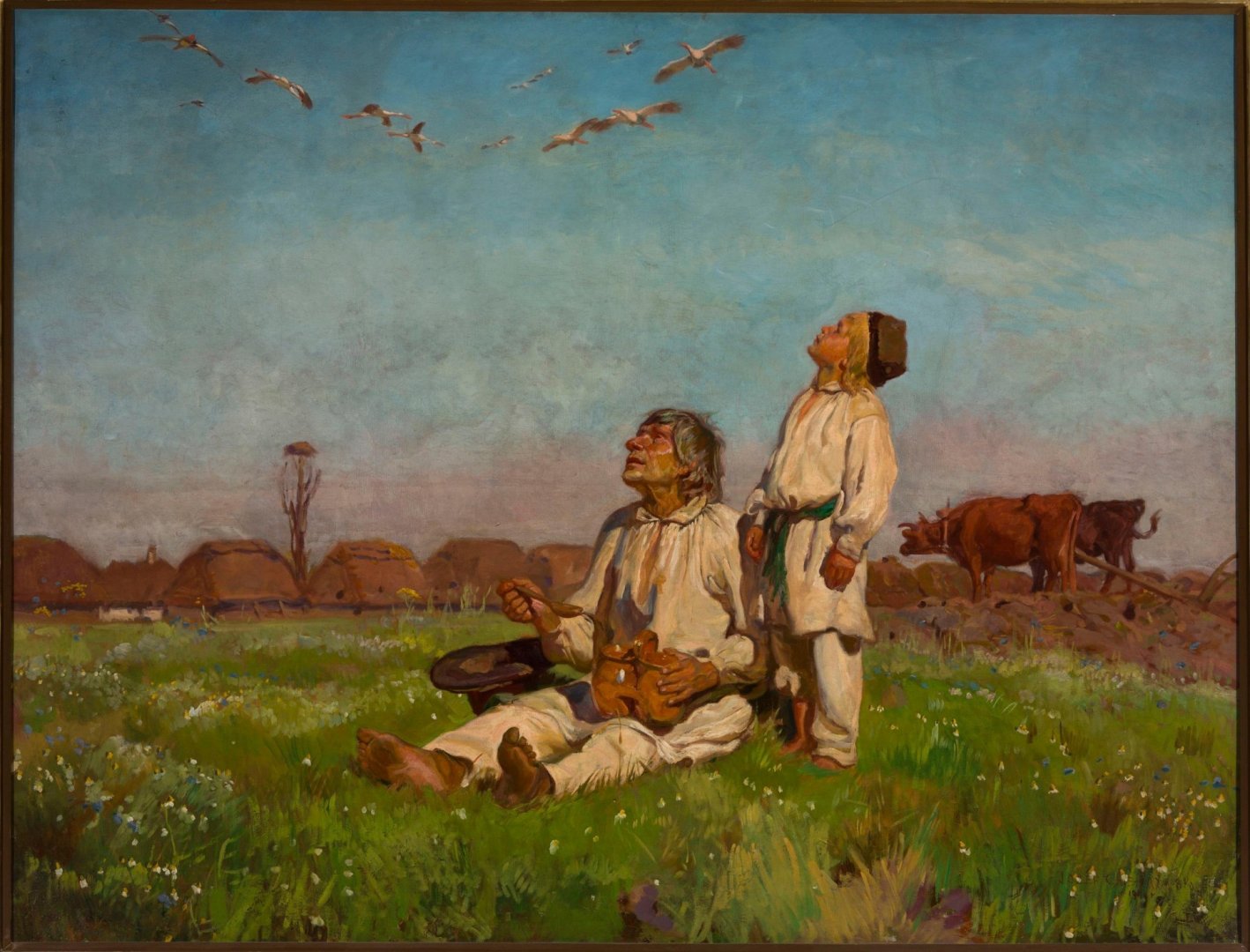