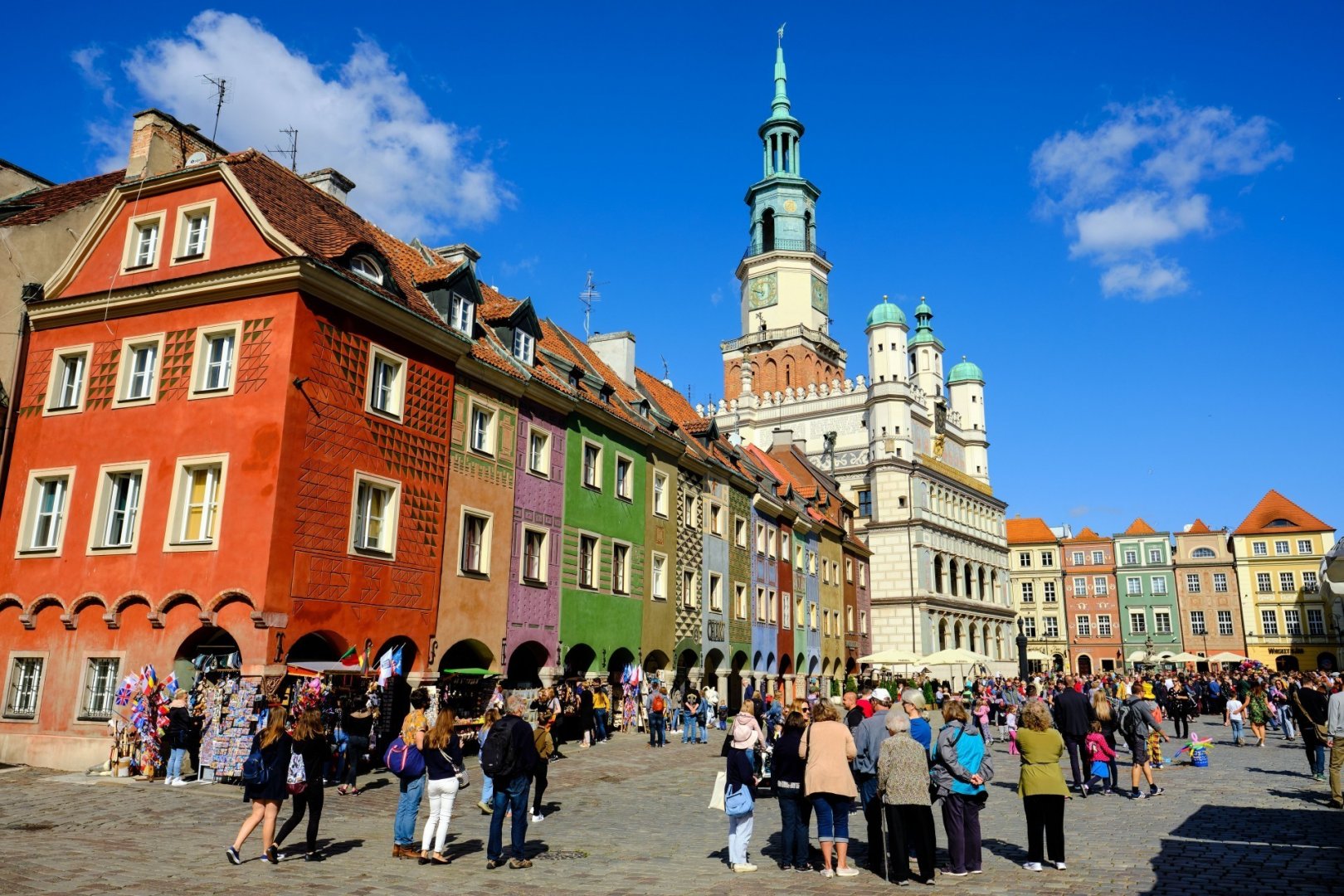 Poznań is the capital of Wielkopolska region, which is the mother land of Polish Nation, situated in the central-western part of the country. It has over 534 thousand inhabitants (the 5th biggest city in the country) and is an important administrative, educational, economical, cultural and tourist centre. It is also the biggest and best well known fairs centre in Poland. Moreover, it is a key point along European transportation rout from west to east: Berlin-Poznań-Warsaw-Moscow, leading to the eastern countries. Poznań, as a city with over 1000 years tradition, has many attractions.

Probably not many people know that next to Gniezno, Poznań was one of the most important cities in Poland. It was established in a place that was later called Ostrów Tumski. It was here that the stronghold of the first Polish rulers was built and Poland was baptized and the first bishopric in Poland and the cathedral were built. The Poznań Cathedral has been rebuilt many times and survived to this day. The cathedral is the resting place of the first Polish rulers Mieszko I and Bolesław I the Brave. Nowadays, most tourist during they stays in Poznań visit Ostrów Tumski with Poznań Cathedral and new Poznań Gate Museum and then continue to the Old Market Square to see the famous Poznań Goats at noon at the Town Hall Tower. Many buildings in this main square were destroyed during the war. Today, however, they delight with colors and decorations. The most important and the oldest building in the Old Market Square is the Town Hall, an example of beautiful Renaissance architecture that was developed by an Italian architect. Nowadays, the building is a headquarters of Poznań City Museum. One more interesting historical attraction is Zamek Culture Centre. The former Imperial Castle is the last and youngest monarch's residence in Europe, which was built at the beginning of the 20th century for Emperor Wilhelm II. After World War I, the Castle was among others The Faculty of Mathematics of the University of Poznań, whose graduates broke the code of the German encryption machine Enigma in the 1930s. During World War II, it was completely rebuilt and the official headquarters of Adolf Hitler was established here. Today it is a cultural facility with many exhibitions, a cinema and an animation theater for children.

The most popular museum in Poznań is definitely new Brama Poznania. The ICHOT Poznań Gate is an Interactive Center for the History of Ostrów Tumski. The main exhibition presents the history of the Cathedral Island. It tells the story of people, events and moments of crucial importance for the Poznan Cathedral Island, which was a place where science, art and commerce could flourish. The presentation of more than a thousand years of history allows visitors to understand the changes that have taken place over the centuries. The museum offer two sightseeing routes: one for young people and adults; and one for families with children. Other interesting place is National Museum in Poznań. The museum has, among others a unique collection of coffin portraits, a rich collection of Polish (Young Poland) and European paintings. It houses the most valuable collection of Spanish paintings in Poland. Here visitors can see the only painting by Claude Monet in Poland, "The Beach in Pourville". Another interesting museums are connected with Poznań culinary tradition and they include Potato Museum and St. Martin’s Croissant Museum. There are also museums of agriculture, apiculture, armor and independence. It is also worth to see the remnants of Poznań Fortress.

Sport and recreation pays an important role in tourist attractions of the city. We can find here modern and huge Lech Poznań Stadium, impressive thermal water complex Termy Maltańskie, Huge botanical garden with magnificent palm house and one of the biggest zoos in Poland (the New Zoo). There are also interesting green areas in Cytadela Park, former Winiary Fortress. Termy Maltańskie Complex was opened in 2011 and it is the biggest sports and leisure object of this type in the country which uses natural thermal water. The area of baths is 6 hectares and visitors can find here 18 sports and recreation swimming pools. 1000 m2 area is World of Saunas. The baths have 4 zones: the sport swimming pools, the water park (16 smaller and larger, deep and shallow pools, 13 water slides, the wave pool, the geothermal water pool, 2 salt water pools); the World of Saunas (14 types of saunas: dry, steam, colour and aromatherapy steam baths; there is also the salt graduation tower and the snow room), SPA in oriental design with ceremonies from Morocco, India and Turkey. Malta Baths is an ideal place for sport fans and pure relaxation. Poznań has the biggest botanical garden in Poland in terms of its area. It also has very popular Palm House. It is an unusual place where regardless of season, we can journey through various plant and climate zones of different continents. The building consists of 9 rooms of great area in which exhibitions are divided according to climate and plant zones: tropical, subtropical, moderate, American succulent, water plants, tropical forest floor, savanna, xerophytes of the Old and the New World and fish tanks. It is an amazing feeling to visit the palm house especially when the weather outside is bad. We can find here, even in the middle of winter, blooming flowers and exotic fruit on shrubs. For all animal lovers there are two zoological two gardens – the Old Zoo and the New Zoo, which create an integral whole of 121 ha in total, what makes them the second largest zoo in Poland. The Old Zoo, having been acting from the opening in the 19th century, was added to the register of monuments. Here, we will find mostly well-known domesticated animals. The New Zoo features e.g. an impressive elephant arena, European lynx enclosure, bear enclosure or the first in Poland pavilion with night animals which is the place of bats wintering.

Summing up, Poznań is a city where you cannot get bored and has many attractions for tourists. It can also be a great starting point for trips to nearby Rogalin Palace, Gołuchów Palace, Wolsztyn Railway Museum, Gniezno the first Polish Capital, Wielkopolskie Open Air Countryside Museum, Licheń Basilica (the biggest in the country), Christ Monument in Świebodzin, Miedzyrzecki Fortified Region or Biskupin stone age marvel. Poznań and its area have multitude of attractions to offer. ITS Poland travel agent will help you to discover them all.