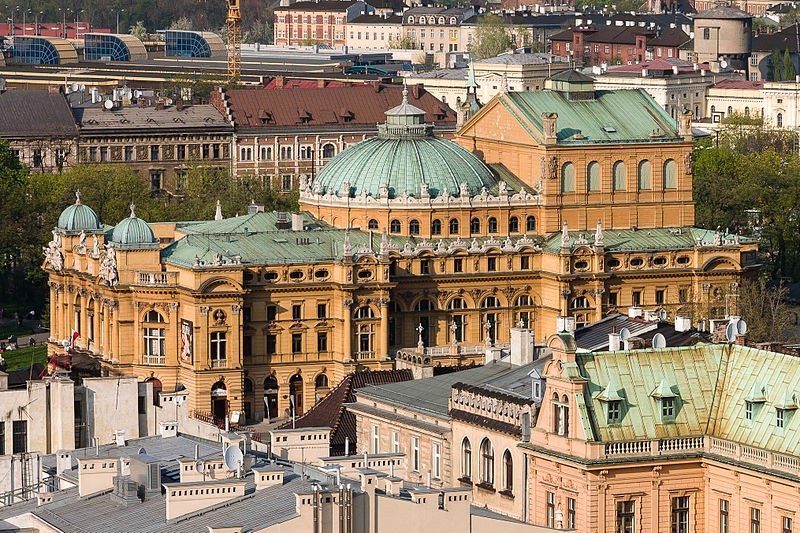 Juliusz Słowacki Theatre is one of the most interesting buildings in Kraków's Old Town and one of the most interesting sites for tourists arriving to Kraków by train or coach. It belongs to the group of artistic institutions which shows plays of the most famous works of literature and music, and attracts the attention of everyone who is a fan of so called high culture. The building of Juliusz Słowacki Theatre in Krakow was opened in 21 October 1893. It was modeled after some of the best European Baroque and Eclectic theatres such as the Palais Garnier in Paris. Now it is enlisted at UNESCO world Heritage list as a part of Kraków's Old Town. It is a real must see during Kraków's Old Town walks.

The Juliusz Słowacki Theatre in Cracow

The Juliusz Słowacki Theatre in Cracow is one of the most recognizable buildings in Cracow. It belongs to the group of artistic institutions which expose plays of the most famous works of literature and music, and attracts the attention of everyone who is a fan of high cultural experience.

If you want to feel the spirit of the 19th century Cracow, you absolutely have to visit this place. It will bring you back to the time when the city became a real partner and a member of the European theatre world.

The history of the theatre

The Juliusz Słowacki Theatre was erected between 1891 and 1893. It replaced Holy Spirit church and the monastery. These medieval buildings from the 14th century were going to ruin, having been demolished by local authorities which decided to use the area to locate a new theatre. One of the most famous Polish artist Jan Matejko objected to devastating the complex and asked the local council to provide some funds for his new workshops there. This request was rejected and, as a result, the artist gave back his honorary citizenship to the council.

The new theatre was erected when Cracow’s authorities found that the Helena Modrzejewska National Old Theatre was in the state of disrepair. When decision of erecting a new building was made, the authorities announced the competition for it which was won by the architect Jan Zawiejski. He modelled the building of the theatre on the Parisian Opera Garnier.

The building of the Juliusz Słowacki Theatre, connecting features of Neo-Renassaince with Neo-Baroque, is a great example of eclecticism. The facility was also inspired by the local art - some mascarons from the Cloth Hall facade were transferred and placed on the top of the building. Its front is decorated by figurines symbolizing the theatre art, i.e. Poetry, Drama and Comedy. What makes the front attractive is also the pair of two main characters from one of the most famous Polish literature piece ‘Pan Tadeusz’ by Adam Mickiewicz – Tadeusz and Zosia, who are standing on the top and invite all the visitors in.

Going inside the building, the visitors can admire the beautiful staircase, leading to the richly decorated by mirrors or stuccoes main room. The busts of the most prominent persons, who contributed to the creation of the theatre, are placed in almost each significant part of the edifice.

The main hall of the theatre consists of four-storey lounges, arranged in the form of a horseshoe around the audience area, which can seat more than 900 persons. In 1894, the stage was equipped with the famous curtain designed by Henryk Siemiradzki. It still opens all spectacles and theatre performances.

The Siemiradzki Curtain pictures the allegorical and symbolic characters from the art of theatre. Among them, there are Apollin with Beauty and Truth, Tragedy with crime and violence as well as crying Eros, Sphinx, Destiny and some other theatre figures.

The curtain won the competition, having been selected by the jury. Other projects were related to the political situation of Cracow at that time and were not accepted by Austrians, occupying the city in the 19th century.

On the backstage, there is an unusual room often visited by tourists – Ludwik Solski’s wardrobe. Solski was a great Polish actor of the 20th century and the theatre’s director. The walls of his room are almost fully covered with sketches, poems and paintings made by artists, poets, writers and actors from his time. Among them, there are portraits of the one of the greatest Polish actress – Helena Modrzejewska, and poems by a well-known modernist writer – Kazimierz Przerwa-Tetmajer.

Today, the theatre grows in popularity and sells tickets almost immediately after the opening of the reservation system. All great plays’ lovers will undoubtedly experience here unforgettable aesthetic feelings and spiritual satisfaction.