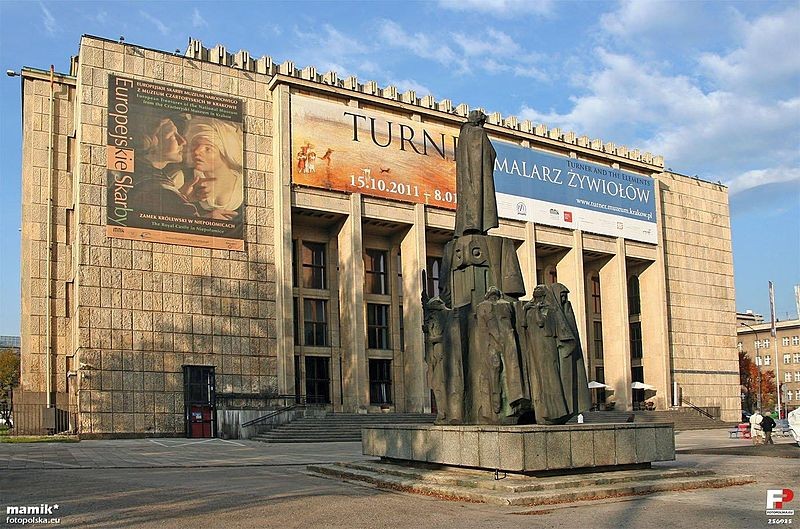 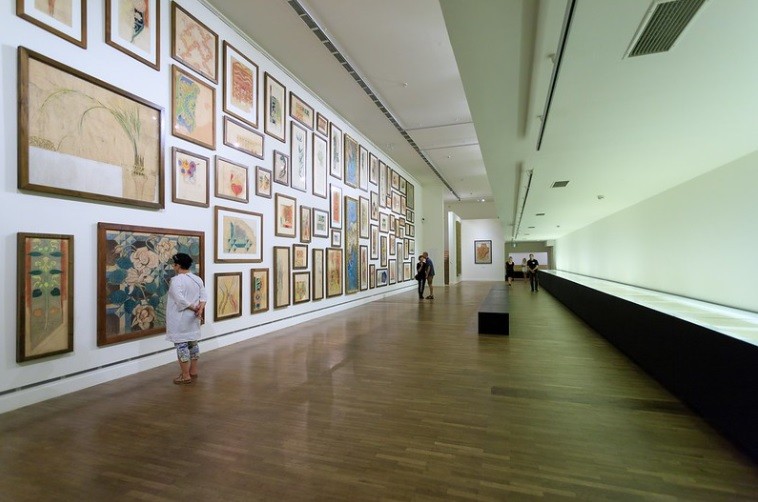 The National Museum in Krakow is the oldest Polish national museum. It was established in 1879. Until the end of World War I, it was the only large museum open to the public in Poland and to this day remains the institution with the largest number of collections, buildings and permanent galleries. The collections under the care of the Museum number over 900,000 exhibits, and its mission is to promote Polish and foreign art. The National Museum in Krakow comprises twelve branches. The main seat is the Main Building, located at al. 3 Maja 1, where there are two permanent galleries: Gallery "Arms and Colors in Poland" and the Gallery of Artistic Craft. Temporary exhibitions are presented in the rooms of variable exhibitions, moreover, educational activities for children, adolescents and adults are held here, numerous conferences, seminars and training sessions are organized. The facility also houses management and administration offices, a library, and some museum studios and workshops.

The National Museum in Krakow is one of the oldest Polish museums. It was founded in 1879 by the Krakow City Council and entered into the State Museum Register. The museum collection includes nearly 900,000 exhibits, ranging from antiquity to contemporary art, with particular emphasis on Polish painting. The mission of the Krakow museum is to promote Polish and foreign art.

The National Museum in Krakow was established by the resolution of the Krakow City Council of October 7, 1879. Until the end of World War I, it was the only such large facility in Poland available to visitors. The first work handed over to the museum was the painting "Nero's Torches" by Henryk Siemiradzki. The painter's donation prompted other artists to exhibit their works in the Krakow museum.

The first seat of the Museum was the Cloth Hall, restored by Tomasz Pryliński. On the upper floors, museum rooms were arranged, which were quickly filled with works of art, mainly gifts from artists and collectors. After the war, in 1950, the Princes Czartoryski Museum, the Library and the Archives were incorporated into the structures of the National Museum. The main building, where the current seat of the National Museum in Krakow is located, was built in the years 1936-1991.

The collection of the National Museum in Krakow includes Polish painting and sculpture from the 14th century (including the Prussian Homage by J. Matejko, works by J. Chełmoński, H. Rodakowski, P. Michałowski, A. Grottger, J. Kossak, J. Malczewski, S. Wyspiański), engravings, drawings and Polish and foreign watercolors, a collection of miniatures, Polish artistic craftsmanship and material culture, military, Far Eastern art, old prints and manuscripts. Moreover, the museum has a numismatic collection of 100,000 copies, including the largest collection of Polish coins.

The National Museum in Krakow has twelve branches.

The most important seat is the Main Building, located at 3 Maja Avenue. There are three permanent galleries on three floors - "Arms and Color in Poland" on the ground floor, “Artistic Craft Gallery” on the first floor, and the “Gallery of 20th Century Polish Art” on the second floor. The exhibition "Arms and Colors in Poland" presents military monuments from the 10th century to World War II. Among the oldest works, a helmet from the 11th century stands out. The artistic craft gallery presents handicraft products made in Poland and Europe from the early Middle Ages to the Art Nouveau period. The most valuable works presented in the Gallery are the so-called pre-Romanesque Czara Włocławska from the 10th century, with a series of scenes from the Book of Judges, and a Romanesque reliquary from Kruszwica from the 12th century in the form of a casket. The Gallery of 20th Century Polish Art presents works from Young Poland to the latest times. Temporary exhibitions are presented in the rooms of variable exhibitions, moreover, educational activities for children, adolescents and adults are held here, numerous conferences, seminars and training sessions are organized. The facility also houses management and administration offices, a library, and some museum studios and workshops.

The oldest branch of the National Museum in Krakow is the Cloth Hall in Rynek Główny 3. The 19th-century Polish Art Gallery arranged there is one of the most famous museum collections in Poland. The works are presented here in four rooms - the hall of enlightenment, the hall of Piotr Michałowski, the hall of the Prussian Homage and the Four Hall. The Gallery of 19th-Century Polish Art in Sukiennice also exhibits sculptures by Jakub Tatarkiewicz, Pius Weloński, Antoni Kurzawa, Antoni Madeyski, etc.

The museum has three biographical departments devoted to great Polish artists. The first is the House of Jan Matejko at 41 Floriańska Street. It is the home of the greatest Polish historical painter. The second branch is the Józef Mehoffer House at 26 Krupnicza Street, along with the garden, reconstructed in 2004 after more than sixty years, designed by Józef Mehoffer and considered the most beautiful Young Poland garden in Krakow at that time. The third branch is located outside Krakow, in Zakopane, at 19 Kasprusie Street. It is a biographical museum of the great Polish composer - Karol Szymanowski, located in the wooden villa "Atma".

Another branch of the National Museum in Krakow is the Szołayski House named by Feliks Jasieński. Permanent exhibitions are devoted to Stanisław Wyspiański and Feliks "Manggha" Jasieński, Polish art critic and collector, one of the greatest donors of the museum. In addition to permanent and temporary exhibitions, the tenement house hosts lectures, concerts, theater performances and art classes for children and teenagers.

In the Palace of Bishop Erazm Ciołek, at 17 Kanonicza Street, there are two permanent galleries presenting the collections of the National Museum in Krakow. Old Polish Art Gallery of the 12th-18th centuries and the Orthodox Art Gallery of the Old Polish Republic. The collection also includes a lapidarium. The Art of Old Poland in the 12th-18th Century is a permanent exhibition that collects paintings, sculptures and artistic crafts from Romanism to late Baroque. The oldest monuments are the late Romanesque capitals from the Cistercian abbey in Jędrzejów from the 13th century. Orthodox Art of the Old Republic gathers collections of painting and artistic crafts related to the Eastern Church.

The Emeryk Hutten-Czapski Museum is the largest branch of the National Museum in Krakow. It is located in the neoclassical Czapski Palace, built in 1884 according to the design of Antoni Siedek. The numismatic collection of the palace, which is still being expanded, has over 100,000 items, of which 2,500 of the most valuable items can be admired on the exhibition covering almost the entire building. In the beautiful, renovated rooms of the palace and the unique interiors of the museum pavilion, visitors will have the opportunity to see many unique or even legendary coins and the most beautiful medals, as well as the rarest old prints and maps.

The complex of the Emeryk Hutten-Czapski Museum also includes the Józef Czapski Pavilion. It is the newest and smallest building in the complex of the National Museum in Krakow. The idea of building the Pavilion is related to the will of Józef Czapski, completed in 1994, who handed over his archives posthumously to the National Museum in Krakow - including priceless journals, personal mementoes and book collections - as well as documents of sister Maria Czapska (1894-1981) and other members the Czapski family.

In 2013, in the historic granary at 6 Sikorskiego Square, a new branch of the National Museum in Krakow was opened - European Culture Center - EUROPEUM. European art from the thirteenth to the twentieth century is on display there.

In 1950, the Princes Czartoryski Museum was incorporated into the structures of the National Museum in Krakow. It is the oldest facility of this type in Poland. The permanent exhibition presents the most valuable in Poland and one of the most valuable art collections in Europe. The exhibition includes masterpieces of world painting, such as Leonardo da Vinci's Lady with an Ermine or Landscape with the Merciful Samaritan by Rembrandt van Rijn, as well as works in the field of painting, sculpture, crafts, military and applied arts. It is also a huge collection of souvenirs presenting the history of Poland.

The Ancient Art Gallery is located on the 1st floor of the Princes Czartoryski Museum Arsenal. On display are monuments of ancient Mediterranean cultures belonging to the Czartoryski collections, the National Museum in Krakow and the deposit of the Potocki family from Krzeszowice.