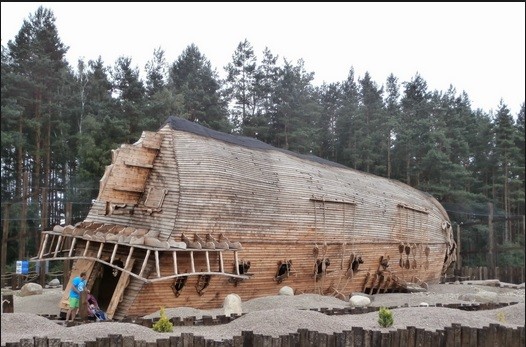 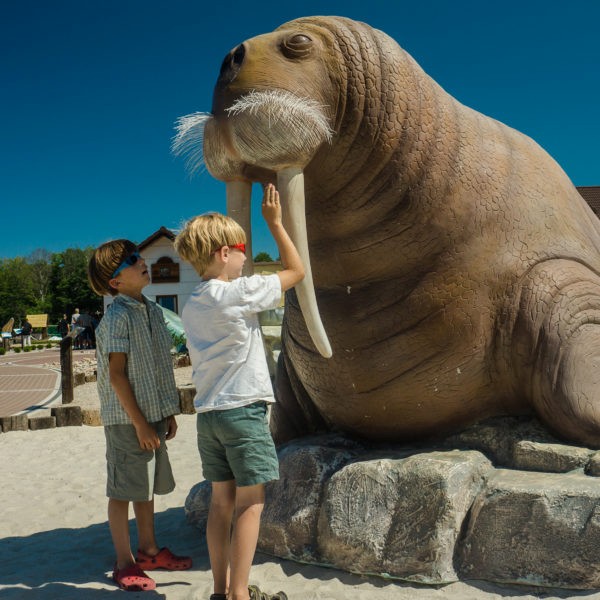 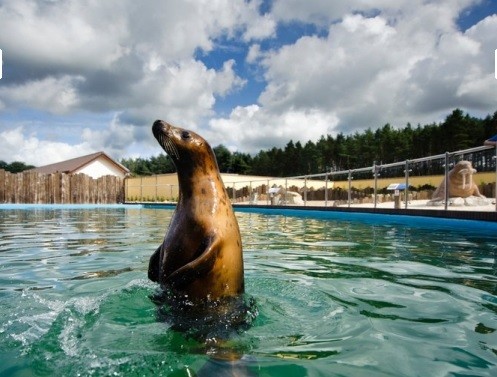 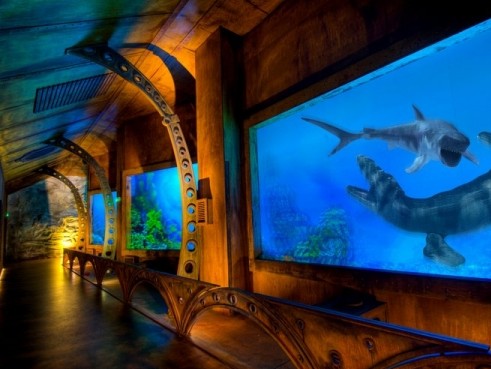 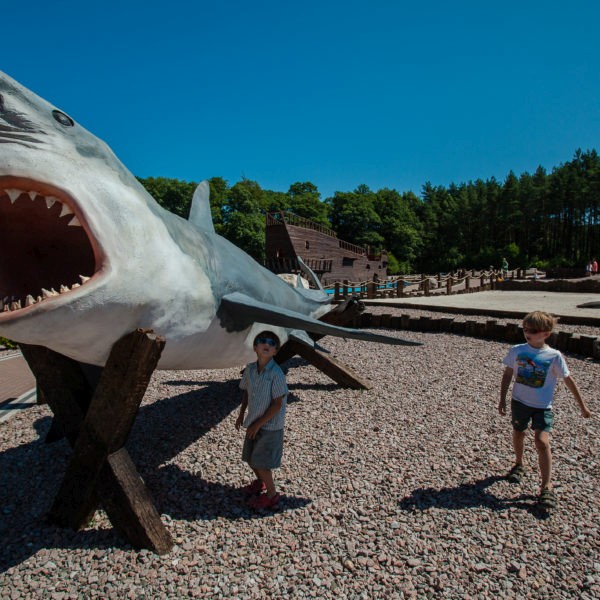 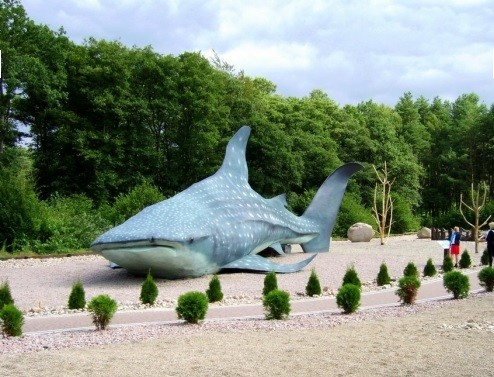 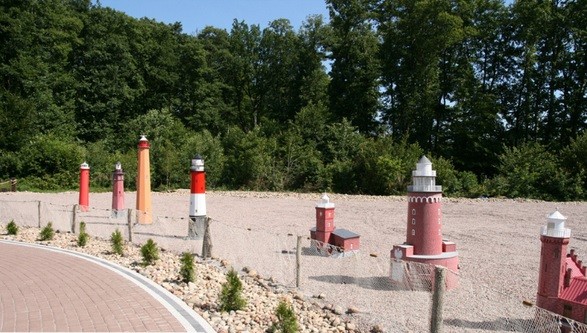 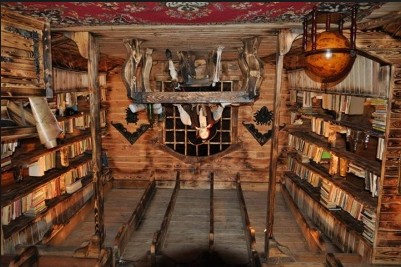 In the park visitors can admire training of grey seals and northern fur seals. During their feeding hours their pens are surrounded by admiring tourists. There are also many unusual attractions such as 3D and 5D prehistoric animals oceanarium, a marine museum, as large as life sea animals and mini Polish lighthouse models and of course my personal favourite an upside down ship. It is better than all upside down houses I have ever seen, the one that really gives your ear labyrinth a real challenge. Finally, for the smallest visitors, there are a pirate rope park and various playgrounds. All in all, a great place to visit both for children and adults.

Sea Park Recreation and Educational Park is the first park in Poland related to the fauna and flora of the seas and oceans in Pomerania. It is located just a few kilometers from Łeba in the town of Sarbsk.

Sarbsk is a small town in northern Poland (Pomeranian Voivodeship) located on the shores of Sarbsko Lake, about 10 km east of Łeba. One of the most interesting tourist attractions is Sea Park Sarbsk, located near the town. The Sea Park was founded in 2012 and is currently the largest institution of this type in northern Poland. It is an education and entertainment center that uses modern multimedia. The Park's attractions refer to the history and culture of Pomerania. Its task is to combine entertainment with education, thanks to which the youngest can learn a lot. Sea Park Sarbsk is the only and largest park of this type, where you can see gray seals swimming in pools and representatives of sea lions - South American fur seals. Unforgettable impressions and lots of fun await you here!

The biggest attraction of this place is the opportunity to see live sea animals. There is the largest seal sanctuary in Poland with four species of sea animals (gray seals, harbor seals, South American fur seals, California sea lions). They are fed and trained at the appointed times. In the seal center there are special stands, from which as many as about a thousand people can admire the pranks of these charming animals at the same time. Seals will surprise you with pirouettes and graceful jumps out of the water, and sea lions will willingly wave their fin to the youngest. Animals are also happy to give their guardian a kiss and show you a whole lot of other tricks. These shows are very popular. Several minutes before the opening of the gates to the arena (usually they open about 15 minutes before the scheduled feeding time), there are quite a long queue. The gates close at the full hour and there is no possibility of entering the audience, nor is it possible to leave during the show. The entire show takes about 30-40 minutes.

You can also go to the 3D Prehistoric Oceanarium, where you will experience an amazing journey through the sea depths of prehistoric times. The visitors can see labyrinths full of aquariums, which are huge 3D screens. All creatures are shows in their natural sizes. The aquarium located in the park is one of the most innovative attractions.

Another attraction that uses 3D technology is Real Ocean - an unusual submarine from which you can admire the contemporary inhabitants of the oceans as if they were right next to it. While walking around the ship, you have the opportunity to watch interesting scenes from the life of the underwater world through several dozen deck panes.

The Błękitek Live Show is also very popular - an interactive multimedia show, during which a friendly whale tells fascinating and informative stories. You can even ask him questions! During the underwater and interactive performance, Błękitek tells the audience various interesting facts about nature, oceans, and even calls out a person from the audience by name and asks a question.

The educational nature offer is complemented by aviaries for coastal birds and the Marine Animal Mock-up Park presenting models of the largest living fish and marine mammals in natural sizes.

Among the attractions relating to the history and culture of the region there is the Maritime Museum with the largest collection of maritime crafts in Poland, the Park of Miniature Lighthouses with models of all the lighthouses of the Polish coast and the Wreck na Wspak - Galeon Solen, combining a historical exhibition (it is a replica of the Swedish ship participating in Battle of Oliwa) with the convention of popular houses upside down, because, like the original ship, it rests upside down.

The park is primarily geared towards the youngest guests, so there are plenty of attractions for them: outdoor playgrounds (one for toddlers, the other for slightly older children), an arcade rope park, a monkey grove on a pirate ship. The pirate train is also very popular.

Additionally, in the park there are gastronomic points with a diversified offer. There is a restaurant where you can order fish or meat dishes with additions, there is a bar serving fast food dishes, you can also quickly eat grilled sausages or hot dogs. There is also a bar serving waffles and pancakes.

Is it worth going?

The park is well thought out and laid out. You can easily move between all attractions with prams, the paths are paved. Thanks to the map, which you can take at the checkout, you will not miss any attractions. The great advantage of this place is, above all, the possibility to participate in shows with animals, which will appeal to both kids and adults. All attractions prepared for visitors create Sea Park Sarbsk an ideal place for fun for children and rest for parents.