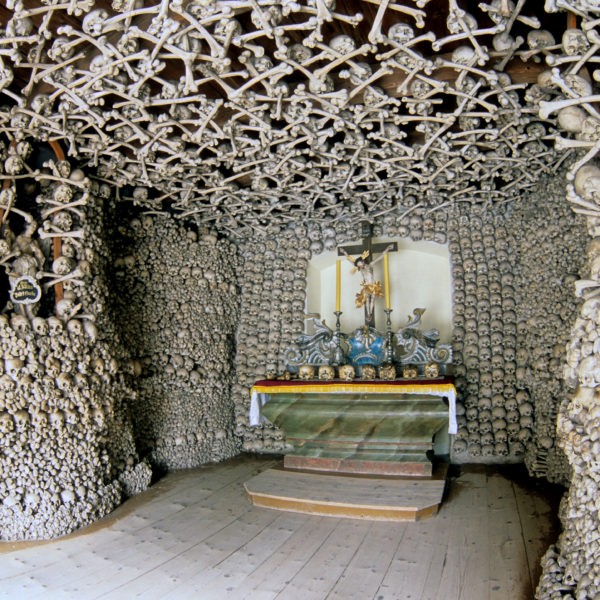 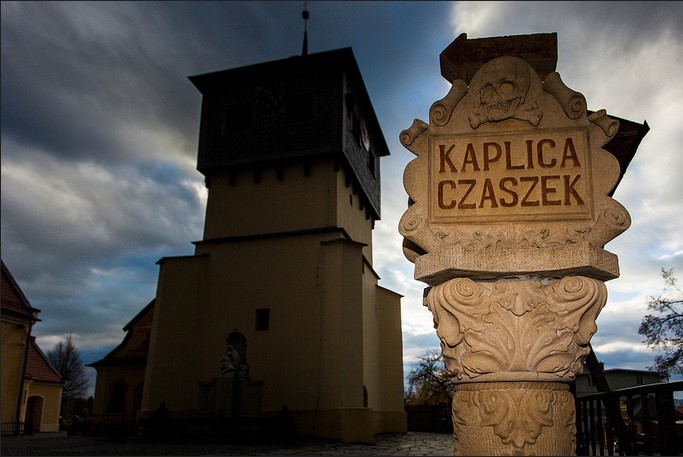 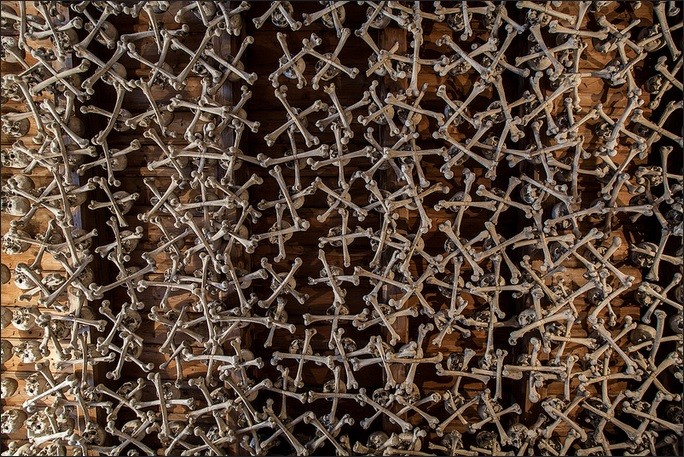 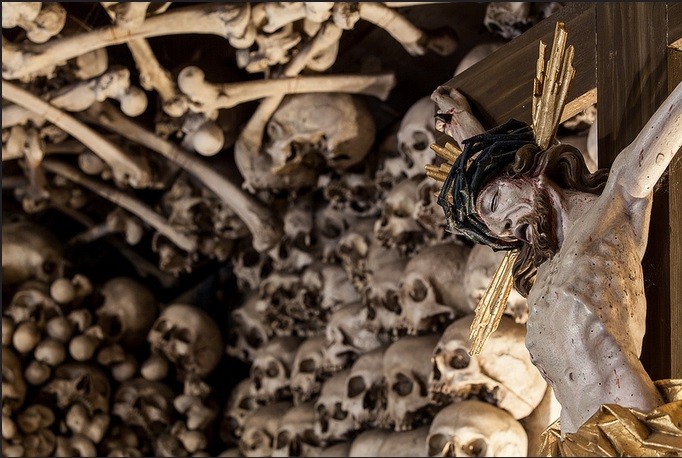 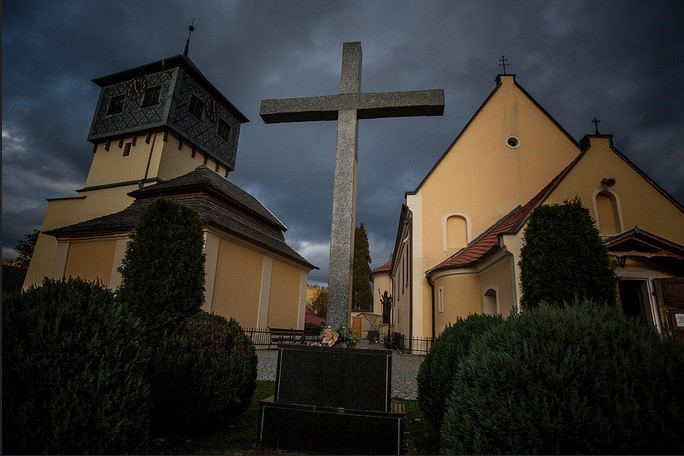 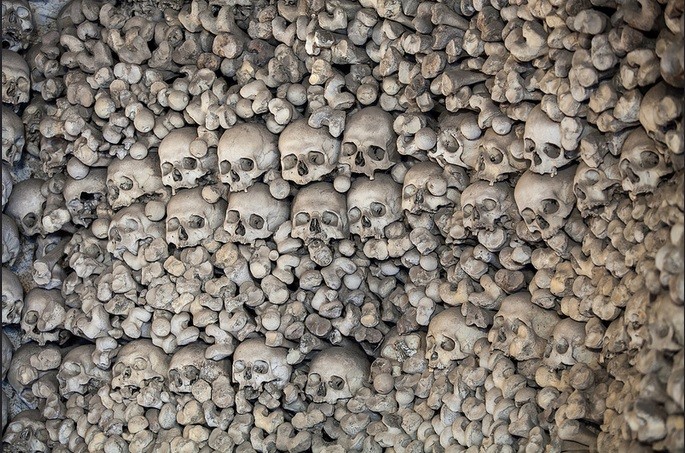 Skull Chapel in Czermna is located about 130 km from Wrocław (2h drive). It was created between 1776-1804 when the local parish priest by accident found a mass grave. For the following 20 years, he with a local grave digger collected human remains that didn’t have proper graves. The walls of this extraordinary chapel are covered with 3 thousand tightly arranged human skulls and bones. The remnants of the people who were victims of wars and epidemics which were their direct result. In the crypt under the chapel there are about 20-30 thousand remnants more. The main aim of the chapel is to commemorate war victims and also to caution contemporary people against the atrocities of war. It is the only such chapel in Poland and only 1 of 3 in Europe. It can be visited by tourists every day apart from Mondays.

The Skull Chapel in Czermna is the most visited place in the Kudowa-Zdrój region. It was built in the years 1776-1784. In the church chapel, about 3,000 real human skulls are looking at those present. It is the only facility of this type in Poland and one of three in Europe.

The construction of the chapel began in 1776 on the initiative of the local parish priest, Wacław Tomaszek. One day he saw dogs digging up the ground under an old church bell tower. He saw human remains in the shallow pit. Together with the churchman J. Schmidt and the gravedigger J. Langer, he began to extract them to the surface. They did not expect to find so many human bones. These were the bones of the victims of wars in the Kłodzko region, probably from the Thirty Years War, the Prussian-Austrian War and the epidemics of cholera spreading after it in the 17th and 18th centuries, and from the Seven Years' War (1756–1763). Father Tomaszek decided to collect all the remains. For nearly 20 consecutive years, he collected bones from anonymous, mass graves scattered around the immediate vicinity and the entire region. After cleaning, whitening and preserving the bones, they were placed in the chapel. Laying them on the walls and ceiling took about 8 years. The last human remains found their way inside in 1804. Moved by the meeting with the transience of the world and death, Father Tomaszek and the gravedigger Langer decided that 20 years after their death, their remains should also rest in this place. Father Tomaszek died in 1804.

The chapel in Czermna is one of the largest ossuaries in terms of the number of bones collected. From the outside, this small baroque chapel does not stand out with anything special and is located between the church of St. Bartholomew from the 17th century (also worth seeing) and the belfry from 1603. The interior of the Skull Chapel makes a real impression. Its walls and ceiling are lined with around 3,000 human skulls and bones. This is all the more surprising because many of them are only arranged in the right way. They lie layer on layer without any binder. At the moment, a wire preventing them from sliding out has already been threaded between them, but the bones have already created a dense, solid wall. On the main wall there is a small, modest altar with a baroque crucifix. Among the crossbones and skulls arranged in layers by the walls of the chapel, there are two wooden sculptures of angels, one with a trumpet and the Latin inscription "Rise from the dead", the other with a scale and the Latin inscription "Come to judgment".

Some of the remains are more exposed than the rest. These include the skulls of the village leader of Czermna, named after Martinec, and his wife. Both skulls bear traces of the method of dealing with death. The village leader was shot, killed with a shot to the head, for leading Austrian troops through the Errant Rocks nearby Czermna during the Seven Years' War (1756-63). When the Prussians entered the village, they arrested the village leader and put him in front of a firing squad. His wife tried to cover her husband with her body, but also lost her life. There is a mark on her skull from being cut with some sharp tool ...

Other skulls you can see include, among others, the Tatar skull with a specific anatomical structure. You can also see the affected skull and the unusually long human femur, which was about 2 meters tall ...

Under the place available to tourists, there is another room called the crypt. More than 21,000 bones have already been deposited there. Unfortunately, they are in a slightly worse condition, because the chapel was not protected against changing weather conditions. In front of the entrance there is a monument with a trilingual inscription in German, Czech and Polish, explains the history of the Chapel.

The Skull Chapel is not a museum or another tourist attraction. It is a place of religious worship, a tomb for all those who died as a result of wars or diseases and their bodies were hastily hidden in the fields. The chapel is a unique image of the transience and fragility of man in which the remains of former families, friends and enemies meet. Once a year, at midnight on August 14-15, Mass is celebrated in the Skull Chapel for all those who rest in it and for all who died as a result of disease or as a result of accidents.

In the Skull Chapel in Czermna is forbidden to take photos . Before entering, you should also take care of an appropriate outfit for such a place. Visiting, along with listening to a recording about the history of the chapel, takes about 15 minutes.