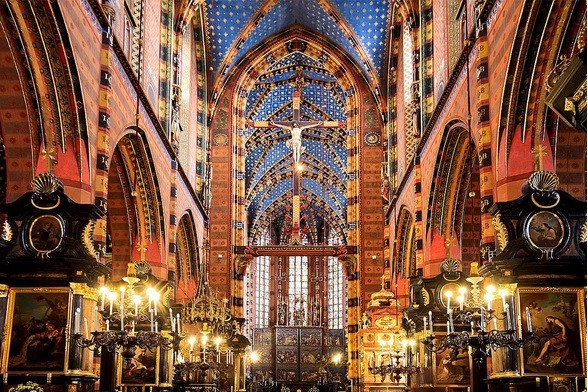 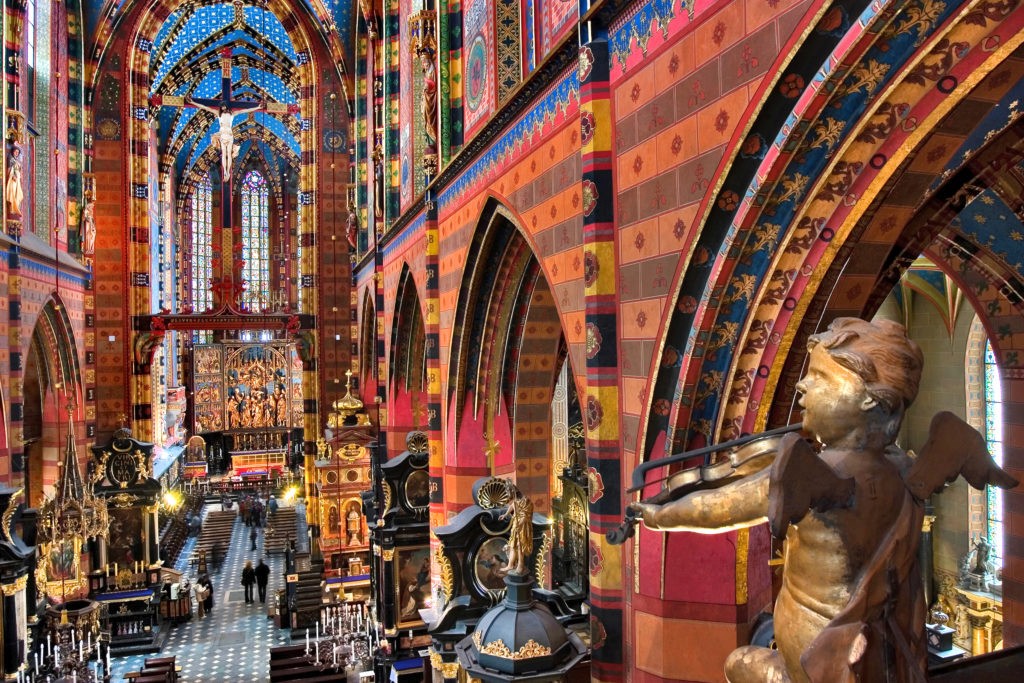 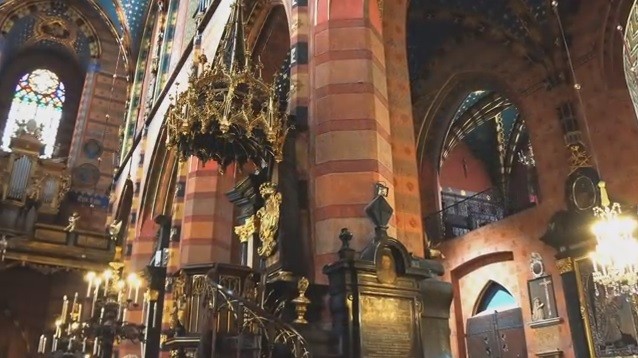 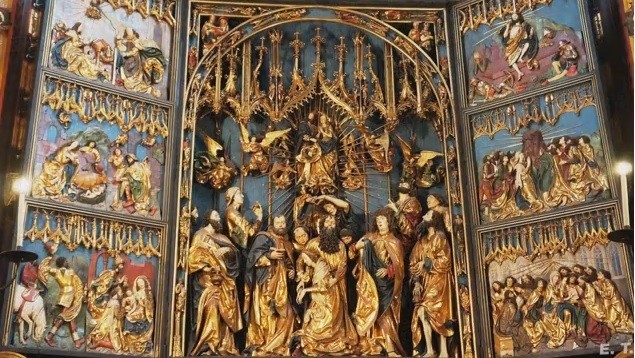 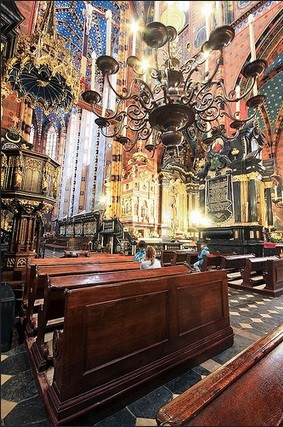 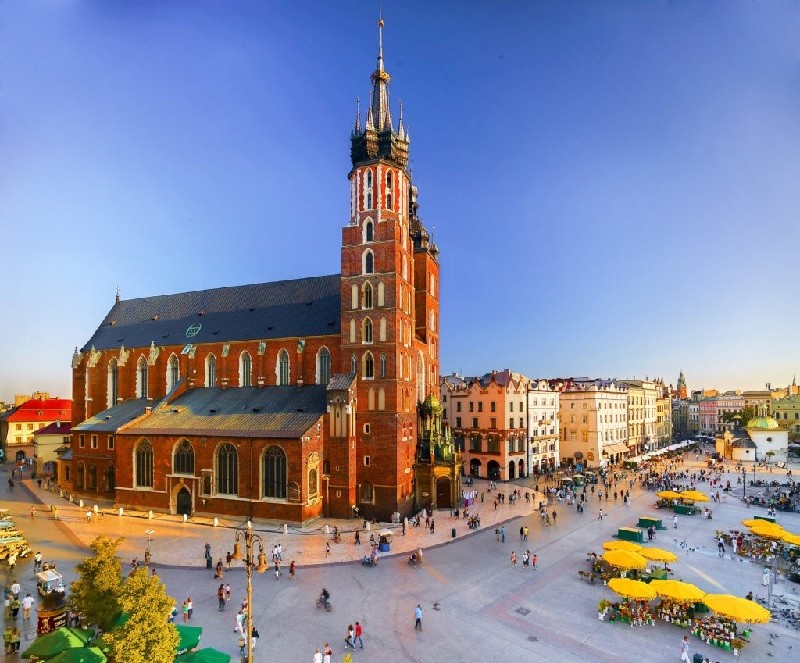 St. Mary's Basilica is one of the most famous monuments in Krakow and Poland. It is one of the largest and most important, after the Wawel Cathedral, church in Krakow. It is located at the north-eastern corner of the Main Square, on St. Mary's Square. Dating from the end of the 14th century, the basilica is preserved in the Gothic style. In the 15th century, chapels were added to the aisles. The greatest gem of this monument in Krakow is the altar of Veit Stoss from the end of the 15th century. It is the largest Gothic altar of this type in Europe. The famous St. Mary's bugle call is played every hour from the tower of St. Mary's Church. Initially, the bugle call was played only at noon and thus marked 12 o'clock punctually. The reason why the melody breaks off at some point is related to the legend of the Tatar invasion and a shot that interrupted the guard's life. Half of the church, including the presbytery and its main altar, is intended for visitors. The second part of the church, along with the main entrance, is intended for personal prayer in front of the Blessed Sacrament displayed in the monstrance and the opportunity to go to confession.

One of the most iconic landmarks located in the very heart of Krakow’s Old Town – the Main Market Square right next to the Cloth Hall. This Gothic church dominates the Main Market Square with its tall towers of red brick reaching high above the surrounding buildings. Saint Mary’s Basilica is by far one of the most significant historic sites both in Krakow and in Poland.

The Early-Gothic Hall church was built in the early 14th century on the foundations of Romanesque temple destroyed during the Tatar raids of Krakow. The following years saw many redesigns and modifications to the original building. In 1355 the local wealthy merchant, Mikolaj Wierzynek, founded new chancel and by the end of 14th century Mikolaj Werner transformed the church into a basilica with lowered naves and tall windows. Basilica’s vaults needed to be reconstructed after a supposed earthquake in 1442. A phenomenon that has never happened before or since. 15th century additions included new side chapels by Franciszek Wiechon, Matias Heringkan’s tented roof (with a golden crown added in 1666) and Veit Stoss’ altarpiece.

The façade of Saint Mary’s Basilica is dominated by the two square towers reaching 82 and 69 metres in height. The higher of the two is finished with a tented roof, a spire and a golden crown. Every hour Saint Mary’s Trumpet Call can be heard from a window 54 metres above the ground. The smaller tower, on the other hand, used to serve as a belfry with now non-functional 1530 bell clock. It also houses a chapel of the Conversion of Saint Paul.

The building itself is characterized by tall, arched windows with floral decors, 21 statues supporting the cornice and a sundial.

The interiors, as the entire building, saw several changes throughout the years. With Late-Baroque re-design scheduled by Archpriest Jacek August Lopacki in 18th century most of the altars, paintings, polychromes and equipment got replaced. Another major change took place by the end of 19th century. Under the watchful eye of Tadeusz Stryjenski Saint Mary’s Basilica received a new Neo-Gothic look with polychrome and stained glass by the great Jan Matejko, Stanislaw Wyspianski and Jozef Mehoffer.

The legends of Saint Mary’s Basilica

Both of the church towers differ from one another both in style and in hight and the true story behind it remains unknown. However, a local tale has it that two brothers were given a task of building the towers with each brother responsible for a separate tower. The construction went smoothly until the point when the south tower, built by the older brother, started to significantly surpass the north tower in height. Out of jealousy and spite the younger of the two killed his brother in a violent outburst. He sealed the roof on the south tower and continued with his work on the north tower. Upon its completion the young builder revealed the horrible truth and took his own life with a dagger that killed his brother. The very weapon is still on display in the Cloth Hall reminding all passers-by of these legendary events.

In the days of old Saint Mary’s north tower played an important role being a watchtower. A bungle call echoed the streets of Krakow as a signal to open or close the city gates or as a warning in case of fire or enemy attack. Upon one such incident during Tatar invasion the guard on top of the tower took an arrow to the throat abruptly ending the warning call. To this very day a bungle call is played daily from the top of the tower and it is still a tradition that the call ends suddenly to commemorate the guard who lost his life protecting the city. Each day at noon the call is transmitted on The First Programme of the Polish Radio.