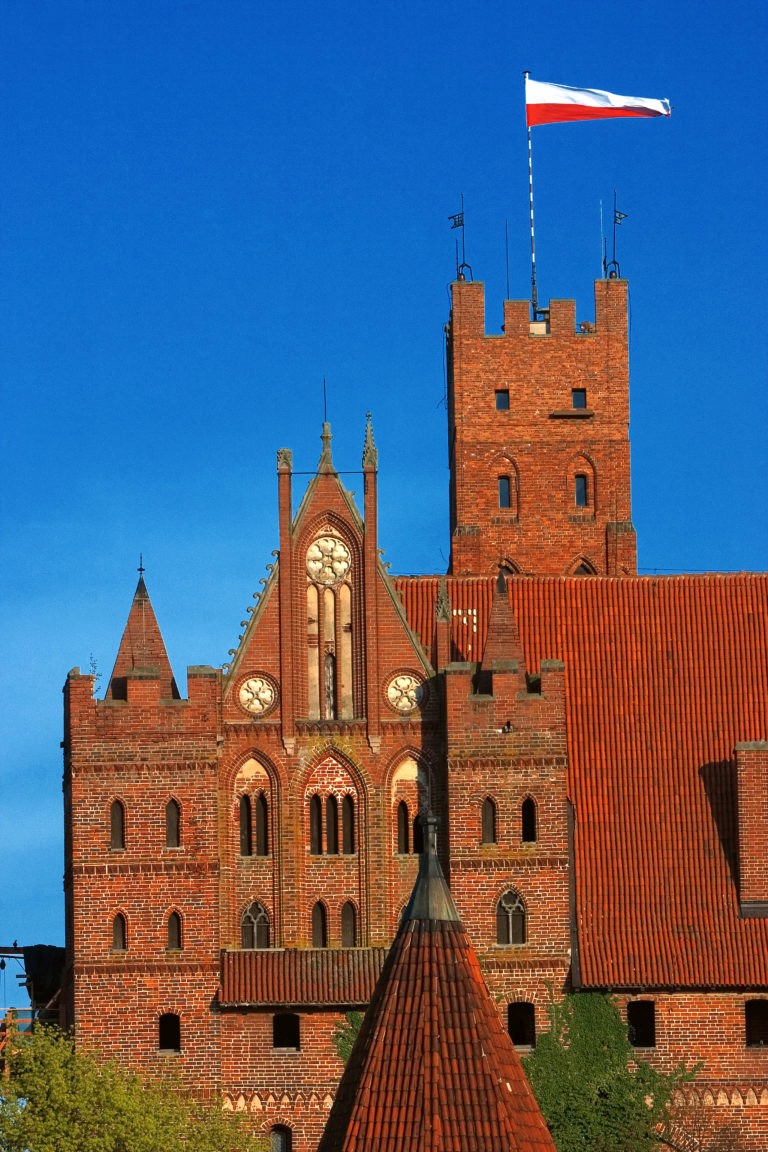 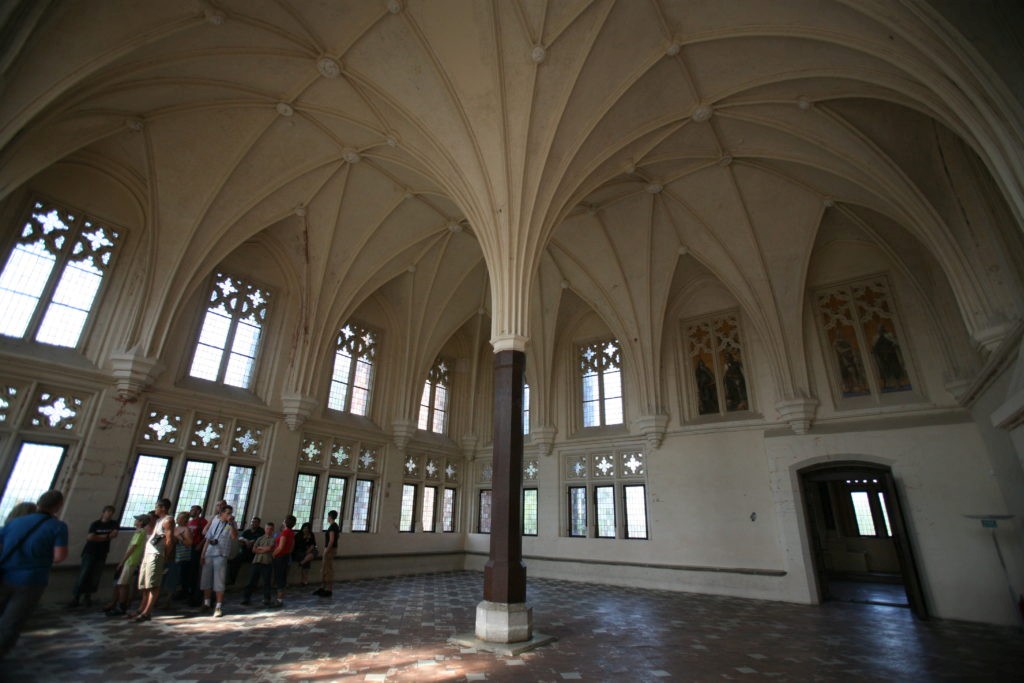 Malbork is a picturesque town in the north of Poland about 60 km from Gdańsk by Nogat river banks. The main touristic magnet of Malbork is Teutonic Knights Castle of the Order of Brothers of the German House of Saint Mary in Jerusalem (Polish: Zamek w Malborku). The construction of the castle started in 1278 when the knights come to Malbork area. The city was called Marienberg then. This is why in 1997 it was enlisted on UNESCO World Heritage List. The interesting fact about the castle is that the construction of it started as early as 1278 and now the castle is the biggest brick construction of this kind in Europe. It was built for 40 years and during its construction 12 thousand rocks and 3.5 million hand made bricks were used. When you plan visiting Malbork Castle you should have about 3 to 4 hours of free time to see all three parts of it with a guide and then stroll a little bit on your own.

The castle in Malbork is the most powerful medieval fortress in Europe. The construction of the castle was started by the Teutonic Knights in the 13th century.

The construction of the world's largest gothic castle was started in 1274 on the initiative of Hermann Schoenberg and Theodoric Gatirslebe. The stronghold, which received the name of Sanct Marienburch, already in its initial assumption was to be one of the most magnificent that Europe then saw, worthily fulfilling the function of the seat of the national master of Prussia. Around 1300, the west wing of the castle, the sanitary tower - danker tower and the defensive wall surrounding the monastery were ready. To the north of the upper castle, an economic outer bailey was created, which later evolved into a middle castle.

At the end of the thirteenth century, in Southern Europe, an unfavorable atmosphere began to build up around the orders of the Cross, due to their excessive wealth and the increasing distortions of the original ideas for which they were founded. In order to ensure further development opportunities, on September 14, 1309, Grand Master Siegfried von Feuchtwangen officially moved the capital of the Teutonic State from Venice to Malbork. It was necessary to expand the castle. The southern wing was added, and then the eastern wing, including dormitories for monks, a refectory and a convent's common room.

The biggest modifications were made in the years 1331-35 during the reign of the grand master Luther von Braunschweig. The silhouette of the building was changed, as well as the internal division of the monastery rooms. The northern wing, which previously housed the chapel, was enlarged, and in its place a two-story sacred part was created with the Church of the Blessed Virgin Mary and the chapel of St. Anna with the necropolis of the great masters. From the east, the church is closed with a polygonal wall with an eight-meter-high figure of Mary with a Child in her hand, set in the central blend.

During the Thirteen Years' War, the castle was sold in 1457 to the Polish king Kazimierz Jagiellończyk for the amount of 190,000 florins (approx. 660 kg of gold). From then on, until 1772, it was one of the residences of the kings of Poland. The High Castle ceased to be a monastery and became the economic base of the fortress. The military crew and clerks lived in the Middle Castle. At the beginning of the 17th century, some rooms of the Palace of the Grand Masters were converted into royal apartments. In the years 1756-67 between the Church of the Blessed Virgin Mary and the Middle Castle, on the site of the former Kleszej Tower, a great edifice of the Jesuit college was built.

In September 1772, after the first partition of Poland, Malbork was taken over by the Prussians. It was the beginning of nearly twenty years of construction and demolition works at the castle. All medieval window openings (except the church) were walled up and others were carved out. The external façades were plastered and the whole thing was covered with a new low roof. Remains of medieval vaults and internal walls were demolished and wooden ceilings were replaced. The same was done in the Middle Castle, where the eastern wing was transformed into a granary.

On May 1, 1933, the flag of the Third Reich was hung on the main tower. The facility also became the venue for frequent ceremonies with the participation of high officials of the Nazi party. In the winter of 1945, during the fights for the city with the Red Army, the castle was turned into a resistance point, which led to great destruction. The fighting continued until March 9, 1945. The eastern part of the upper and middle castle, the main tower and the castle church were completely demolished. Destruction was estimated at 50-60%.

Visiting the Castle takes a lot of time, even up to several hours. The whole complex is huge. Visitors will see, among others: High Castle (including, among others: Convent Kitchen, St. Anne’s Chapel, Convent Refectory, Convent Chamber and much, much more), The Middle Castle (The Grand Refectory, Cellars, Kitchen) and Great Master’s Palace  (Summer Refectory, Low Vestibule).

In addition to many rooms, chambers, bedrooms, corridors and utility rooms, visitors will see several interesting exhibitions. One of the most interesting exhibitions at the castle is "Amber Contexts" - an exhibition showing various aspects of amber. The Malbork amber collection is considered to be one of the largest and best in the world. It is also worth seeing the military exhibition where there are almost all types of weapons found in the sixteenth and nineteenth centuries. In addition, the castle also includes a collection of sculptures, as well as archaeological exhibitions.

Among the various collections visitors will see, among others a collection of ceramics, furniture, textile, stained - glass, etchings, as well as an exhibition of numismatics. The complex hides many exhibits not only behind glass showcases, many museum specimens are exhibited in various rooms (e.g. furniture, sculptures, armor).

The highlight of the trip is the entrance to the 66-meter-high tower with a viewing platform, from where there is a vast view of Żuławy Wiślane, and in good weather, visitors can see the gothic silhouette of the castle in Kwidzyn.

A special route has been planned for families, which will make a visit to Malbork much more pleasant. During its duration, children are dressed as knights, and then, together with their parents, they travel through the castle chambers and tunnels, solving puzzles that will open the door to the treasury for them. The tour takes about 2 hours. The family route is available in May, June and September, and every day during summer holidays except Mondays.

The castle in Malbork also hosts various historical events, such as knight tournaments or the spectacular Siege of Malbork, during which tourist will watch the staging of the battle for this fortress. There are also night tours and "light and sound" performances. Moreover, it is not difficult to find special museum lessons, workshops and educational games with the scenery of the castle grounds.