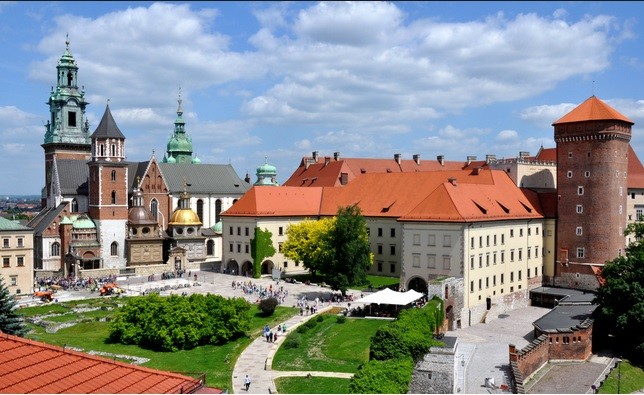 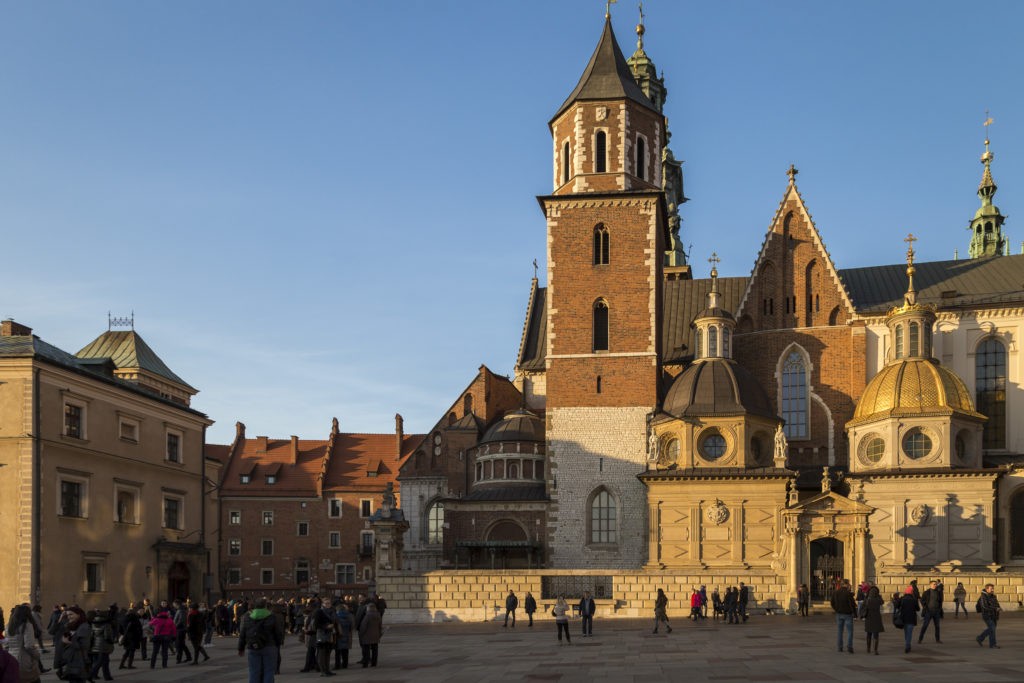 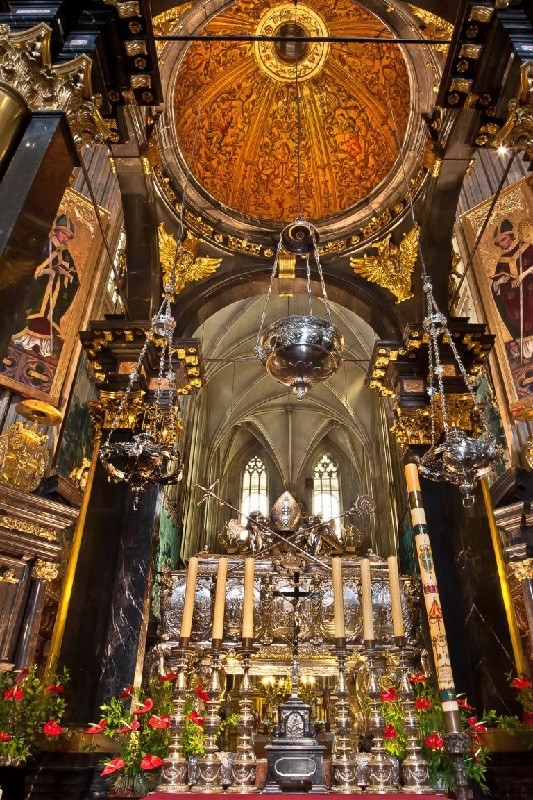 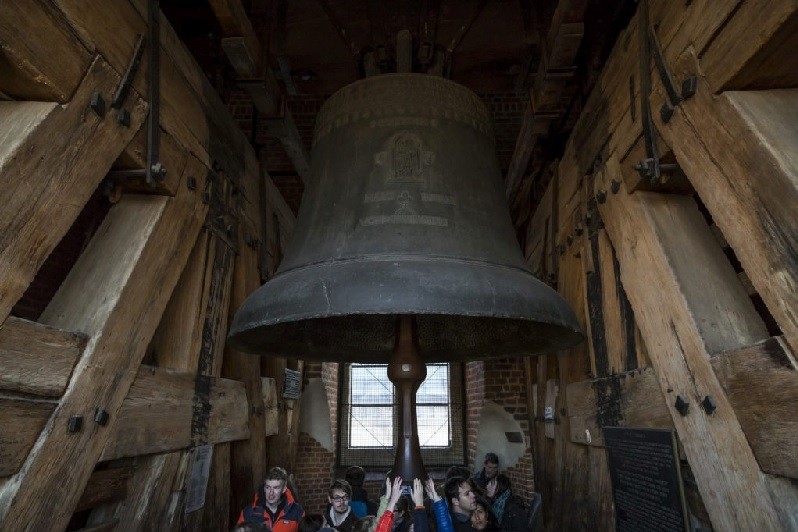 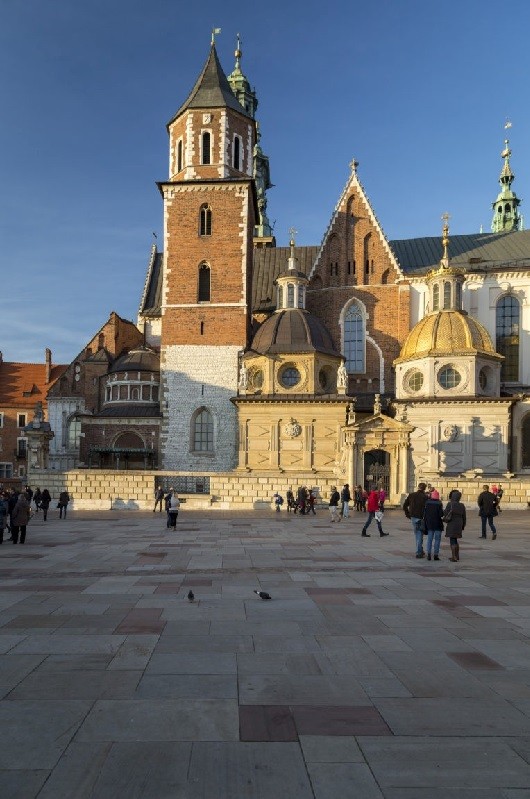 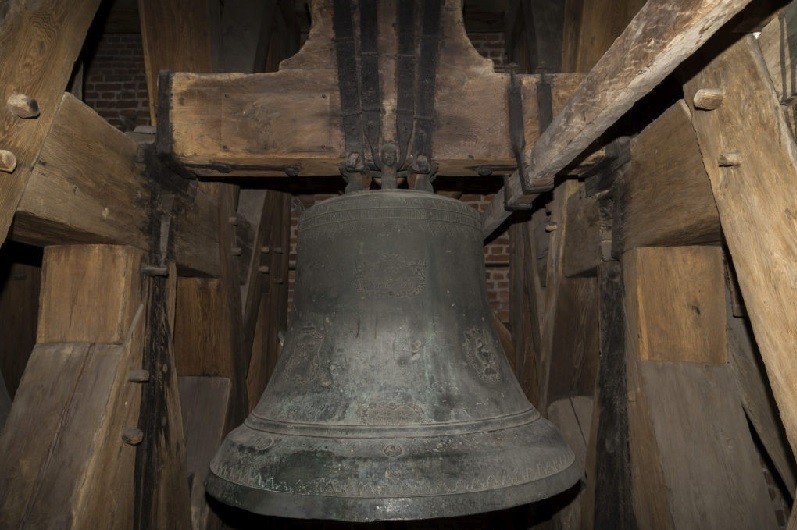 The Wawel Cathedral is undoubtedly one of the most important monuments in the country. The full name of the church is the Cathedral Basilica of St. Stanislaus and St. Wenceslas in Krakow. It is here that the most important events in the history of Poland took place. Coronations, royal weddings and funerals. Inside, the central place is occupied by the 17th-century confession, i.e. the canopy altar of St. Stanisław, the bishop and patron of Poland, who died in the 11th century as a result of a conflict with King Bolesław the Bold. Under the gilded dome there is a silver coffin with the relics of the saint, decorated with scenes from his life, supported by four angels. The sarcophagi of Polish monarchs with carved figures of the deceased: Władysław Łokietek, Kazimierz Wielki and Władysław Jagiełło were placed in the main and side naves. The cathedral is surrounded by 19 chapels. The most famous of them, the Zygmunt Chapel with a golden dome (completed in 1533), is the most outstanding Renaissance work in Poland. It is distinguished by a beautiful, ornamental, symmetrical interior. Opposite the altar in the chapel are the tombstones of the last kings of the Jagiellonian dynasty: Zygmunt I the Old and his son Zygmunt II August. The remaining royal tombs are located in crypts. They were built in the 16th century, and later connected with the relics of the Romanesque cathedral located in the basement. The Presidential Couple, who died in the Smolensk catastrophe, also rests here. At the end of the visit, it is also worth going to the Sigismund Tower, which offers an excellent view of the surrounding area. On its top floor you can admire the most famous bell in Poland, named after its founder, King Sigismund I the Old. The entire Cathedral, along with the Royal Tombs and the Sigismund Tower with the Sigismund Bell, as well as the Cathedral Museum are open to tourists.

The ticket includes: Wawel Cathedral and the Archdiocese Museum.

If you would like to get to know the polish history and its culture you must see the Wawel Cathedral in Krakow. There is no better place to meet the royal ancestors and witnesses of historical battles, treaties or wins.

The Wawel cathedral seems to be one of the main highlights frequently visited by tourists from all over the world. Almost everyone coming to Cracow directs his steps to see this unique place. Considering its historical and artistic beauty it can compete with the best known monuments in Europe.

Royal church and its role in royal life

The cathedral played an important role in the polish monarchs’ life while they came to Cracow. It has witnessed royal coronations taking place by the main altar. It also became the polish sanctuary when the relics of polish saints were placed in there. For centuries the church has housed the crypts constructed to bury polish dynasties and national heroes. In such way it became the National Pantheon. Important meaning it got when Pope John Paul II visited the church favoring it and celebrating a mass to pilgrims meeting him while he came to Poland.

The history of the Wawel Cathedral in Krakow

The royal church was constructed firstly about XI century. It was called Chrobrowska after the first polish king Bolesław I The Brave. This place was probably destroyed at the same century. The historical documents don’t explain clearly how it looked like. Analyzing its structure it may be suspected that its appearance was very close to the regular church. The second structure was more closer to the present one. Only two pieces left: the lower part of the silver bell tower and st. Leonardo Crypt, the oldest one in the cathedral. The third and the final church was built between 1320 and 1364 and erected by the polish king Casimir the Great. Soon the royal cathedral became the most recognizable place around still contracted city.

The cathedral is abbreviated as the wawel one. Its name originates the old-polish language and it means a limestone rock rising on the side of Vistula river. Wawel had been protecting in such way for the very beginning of its existence and probably it was one of reasons why it has been chosen as a residence. Polish monarchs built up the hill with the cathedral and the castle. After that the wawel village for courtmen raised. Today some remains of their houses and small churches are still preserved in the middle of the hill.

While entering the Wawel Cathedral in Krakow, visitors can see a set of prehistoric animals’ bones hanging by the left-hand side of the main entrance. Following one of local legends these bones work a talisman or an amulet protecting place of evil. Working well the cathedral is still standing in its historical form.

Who was st. Stanislaus?

Inside the church one particular place catches visitor’s eyes. It is St. Stanislaus chapel placed in the centre of the temple. It is cover by the golden leaves-styled canopy supported on four columns. On the main altar the silver shrine containing bishop St. Stanislaus relics stands. After bishop’s death he has been canonized and became the polish patron. The altar where the shrine is displayed was named the altar of homeland.

Heading to st. Stanislaus chapel visitors pass kings Ladislaus Jagiello and Ladislaus III of Poland tombs. Others such significant are placed on two sides of the main altar. Among them the founder of the cathedral Casimir III the Great.

St. Stanislaus chapel is the most eminent one in the cathedral. It slightly covers the view of the main altar, a witness of the coronations of polish monarchs. The first one took place in 1320 and for that time the kings of polish dynasties have been crowned till the moment when this prominent custom was moved to Warsaw following the political situation. The cathedral is decorated with the flemish tapestries donated by wawel bishops.

The heart of polish history

The royal church became also the burial place for polish gentlefolk founding memorial chapels to commemorate themselves. All of them are stunningly decorated with marble details made by Italian artists living in Poland at that time. One of them seems to be particularly noteworthy. It is the Sigismund chapel, the most important example of renaissance architecture in the central Europe. It is designed by italian architect Bartolomeo Berecci and founded by powerful royal Jagiellonian dynasty. Also became it’s burial place.

At the bottom of the cathedral there are the royal crypts. They house tombs of polish monarchs as well as national heroes. Just mention such as Jan The III Sobieski, Stefan Batory, Tadeusz Kościuszko or Józef Piłsudski. All of them perfectly describe the polish history.

When visitors leave the Wawel Cathedral in Krakow they pass under the canopy on which the latin sentence is located: Corpora dormiunt vigilant animae ( The bodies are asleep, the souls stay away). It definitely defines the significance of such eminent, historical and royal place.