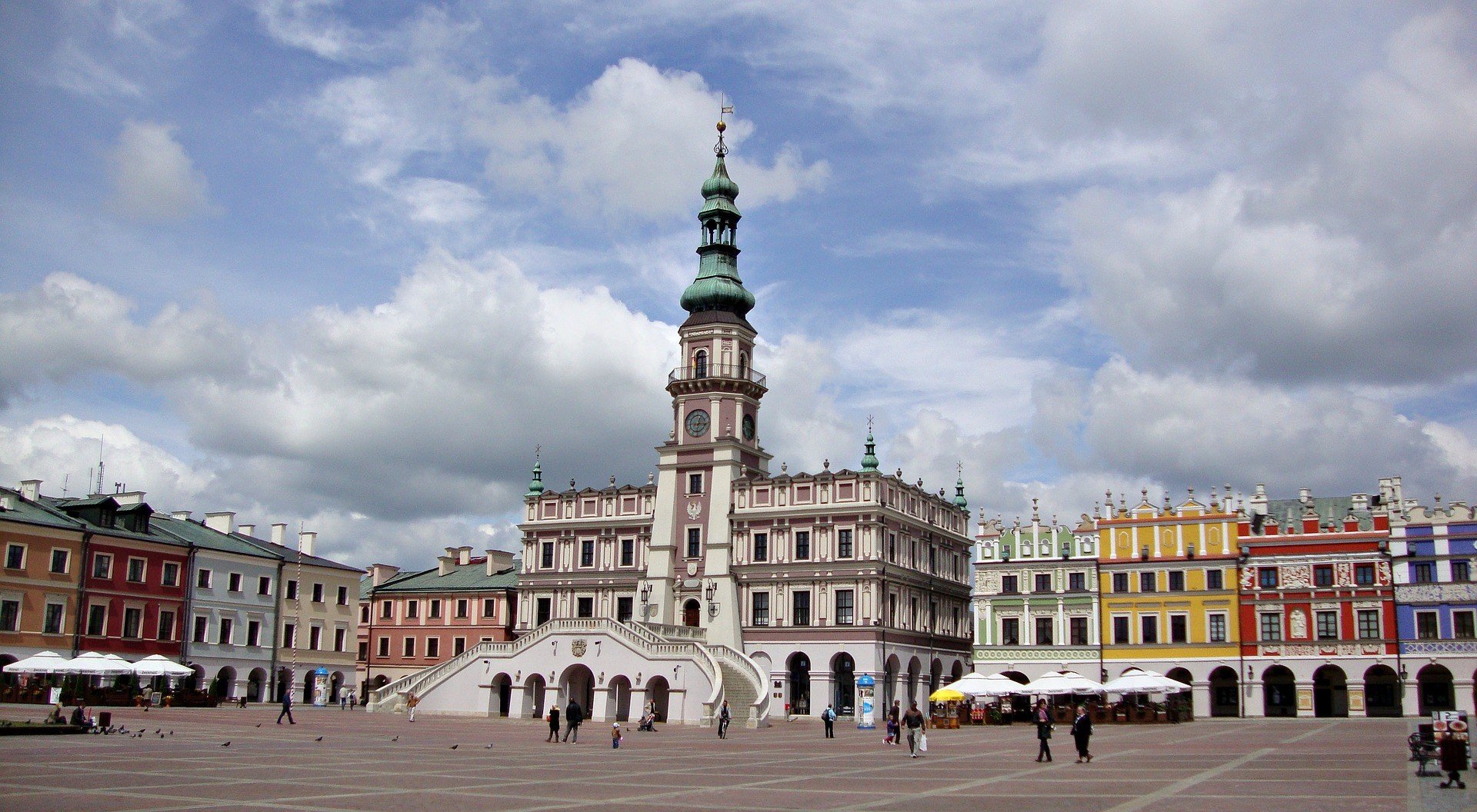 Zamość is a town in the south-east part of Poland in Lubelskie Region called “Pearl of Renaissance”, "Padua of the North" or “Town of Arches” especially thanks to the beautiful old town designed on a star plan. Zamość Old Town is enlisted at UNESCO World Heritage List which is the highest distinction that tourist destination can acquire. The town has slightly less than 65 thousand of inhabitants and it is the second largest, just after Lublin, in Lubelskie region.

Zamość is Jan Zamoyski dream came true. He established the town in 1580. This magnificent, uniformly Renaissance city was created by the meeting of two exceptional personalities - a rich magnate and a genius architect (Bernardo Morando who continued works in Zamość till his death in 1600). These people invented and created a city full of surprising monuments, including the unique cathedral, which gave inspiration for so called "Lublin Renaissance" movement in architecture.

Zmość gives tourists a lesson about the power of diversity as it was a multinational city in the 17th century. Although initially only Catholics could settle here, later on, this ban was loosened and as a result the streets of Zamość began to be traversed by Armenians, Jews, Greeks, Spaniards, Italians, English and even Persians. It was a multi-religious city, trade flourished, Zamość fairs were famous, people could buy here literally everything: fabrics, eastern spices, weapons, oxen and horses. The owner of the city was an open-minded man, and knew that the city's strength was in its diversity.

Architectural layout of the Old Town was designed by Italian architect Bernardo Morando. In the central point there is the Town Hall built into the layout of tenement houses to which leads magnificent fan-shaped staircase. The Town Hall Tower has 52 m, at noon every day a bugle call at the tower is being performed. In the undergrounds of the Town Hall there is a tourist rout showing the history of the building and town. Morando designed the old town according to the plan of Italian cities and ideal cities based on an anthropomorphic concept. The "head" was to be the Zamoyski Palace (now court of law), and the backbone was Grodzka Street. The arms and hands were the seven bastions surrounding the city. There are two markets around the old town: the Salt Market and the Water Market, which symbolize internal organs. The Great Market Square has ideal dimensions of 100 x 100 meters and fits perfectly into the concept of the ideal Renaissance city. At first glance, it seems enormous because there is no town hall in the center. When they look around, tourist notice not only rows of even tenement houses, but also restaurant gardens exposed in the summer. Majority of tenement houses have the famous arcades. It is especially worth paying attention to the five interestingly decorated mannerist-baroque Armenian tenement houses located in the northern frontage of the market square. Nowadays, they host Zamojskie Museum. It is also worth to see one more building in the Old Town which is Zamojska Academy. It was the third university in Poland and the first private one, but no longer has these functions. Finally, it is also worth to see the oldest still operating pharmacy in Poland. It was opened around 1609.

The Zamość Cathedral was the apple of Bernardo Morando's eye. It is one of the most magnificent architectural attractions in Poland. Its style was numerously reconstructed and called Lubelski Renaissance. The church was built as a monument to the victory of Hetman Jan Zamoyski and it also became the family chapel. Not only members of the Zamoyski family were buried in the crypts, but also the founder of the cathedral and the planner of Zamość - Bernardo Morando, who lived here until the end of his life and was respected by the local community. Other churches worth a visit include church of St. Catherine, Franciscan church and St. Nicholaus church which used to be an Orthodox church. A real pearl of Renaissance is also Zamość Synagogue. Today, here is among others Multimedia Museum of the History of Jews in Zamość and the Surrounding Area. A tourist attraction related to the history of the Jewish community in Zamość is also the mikveh building - a ritual Jewish bathhouse.

Thanks to the fortifications built at the turn of the 16th and 17th centuries, Zamość was one of the most protected fortresses in the country. Tsar Alexander II ordered the fortifications to be demolished in 1866, but luckily the task wasn’t completed. The survivors include extensions (Polish Nadszaniec), arsenal and rotunda. The preserved parts of the fortress have been restored and are tourist attractions. Museum of Fortifications and Weapons "Arsenal" exhibitions are divided into three places: the Arsenal, the former Powder Magazine and the Pavilion under the Curtain. The most interesting one is Powder Magazine as it uses the new technologies. During the multimedia 3D screening, you can watch all the wars and skirmishes that took place in Zamość. Modern mapping in a completely darkened room takes you back to the times of Jan Zamoyski, and then guides you through the centuries, showing the history of battles, town fires and military victories. Other military attractions can be seen in the Rotunda, which today houses the Zamość Martyrdom Museum, or the Nadszaniec with cannons. Along Bastion VII-Nadszaniec tourist route tourists walk the half-kilometer-long underground, where they can learn about the history of Zamość fortifications.

Zamość is a truly unique town in Poland, thanks to retaining such a uniform style to this day. The Old Town with the Great Market Square and the magnificent Town Hall, Armenian tenement houses, bastions and the Arsenal create outstanding atmosphere of this "Pearl of the Renaissance", making it one of the most popular tourist attraction of eastern Poland. An additional advantage of this place is the vicinity of Roztocze - a beautiful, wild land with unspoiled nature, dark forests, transparent rivers and unusual architecture characterized by elements of Eastern culture. Whoever, has come here once will want to come back ITS Poland DMC helps to organize all types of stays in this and other areas of Poland. Just contact us and let’s share your travel dreams!