Big wooden sailing ships evoke fascinating associations of romantic sea sunsets, crowded historic harbours, armadas and finally fancy pirate stories. No wonder that international sailing events arise great interest among tourists all over the world. Poland is lucky to have such ships in its fleet and also to host important international events in Gdansk, Gdynia and Szczecin harbours.

Sailing is practised on water-powered vessels powered by sails. It is currently mainly discipline of water sports, a type of tourism or recreation, as well as a form of training - both for later seafarers, officers and captains of units, as well as character school for teenagers.

Polish ‘Dar Pomorza’ (English: The Gift of Pomerania) was built in 1909 and was a gift to Marine School in Gdynia. It made 102 training cruises and made distance of half a million sea miles (the distance that allows to sail around the globe 25 times), 13 384 students were trained aboard this ship. An average crew of it consisted of 189 people. Since 1983 it has been the Marine Museum branch and can be viewed at Kosciuszko Square in Gdynia. It is possible to enter on board.

Currently, Polish marine students are trained at long sailing ship Dar Młodziezy (The Gift of Youth), which is also sometimes moored in Gdynia sea shore. It was built in 1982. The Gift of Youth is a three-masted Polish training ship (frigate) of the B-95 type. Its length counted on board is 94.2 m with bowsprit 108.815 m. Its maximum height is 50.1 m, width 14 m and draft 6.6 m. It is owned by Gdynia Maritime University and it is the successor of training ships "Lwow" and "Dar Pomorza". Its crew can count 196 people but permanent crew is 32 + 4 lecturers.

It is a large sea yacht belonging to the Polish Scouting Association. Zawisza implements the statutory goals of scouting. These included, for example, in 2000 Peace Cruises with an international crew, with young people from countries engulfed in armed conflicts in the Middle East. Since 2006, it has been participating in the See the Sea program, and since 2011, every year Zawisza scouts have been carrying the Bethlehem Light of Peace for scouts from Bornholm and Karlskrona. Tourists can observe this vessel during e.g. Tall Ship Races.

STS Fryderyk Chopin is a ship with original brig sails, favourite - in its time - by pirates due to high speeds. Its home port is Szczecin. Fryderyk Chopin, put into operation in 1992. Since then, he meets with other sailing ships in Operation Sail, fighting in regattas with the fastest sailing ships in the world. The vessel is known as the deck that promotes the idea of maritime education and implements the maritime education program during the Schools Under the Sail. In 2012, STS Fryderyk Chopin won The Tall Ships Races, and in the following year he took third place, strengthening his position among the world's largest sailing ships.

Although it has been writing the Polish chapter of its history since 2011, Captain Borchardt holds the title of the oldest active sailing ship in Polish fleet. It is a three-masted gaff schooner with a total length of 45 meters. It was built in the Dutch shipyard and it was launched in 1917 and entered service in April 1918 as a sailing cargo ship. In 2011, the sailing ship was purchased by Skłodowscy Yachting, which brought it to Poland. After the renovation in Gdynia, the ship moved to Gdansk, which became its first Polish home port. In 2017, the sailing ship moved to Szczecin, and the official ceremony of hoisting the Szczecin flag on the mast took place during the final of The Tall Ships Races.

It was built in 1980 in the Gdansk Shipyard commissioned by Polish Television. It became the first unit in the world built for a television station. Above all, Pogoria turned out to be an excellent sailing ship - brave, safe and fast. The steel bark has three masts and a total length of 46.8 m. It is distinguished by a blue stripe painted along the entire length of the white hull. Finally, the ship was placed under the aegis of Gdynia. Since 1995, Sail Training Association Poland implements the ideas of maritime education on board.

It was built in 1926 at the shipyard in the Netherlands as a ship for the transport of live eels Hans 2. In 1977 it was decommissioned. The decaying wreck of the "beauty" was found in 1978 by its later long-term owner - Victor Gottlow. He decided to buy it and after a long renovation, turned it into a sailing ship. First a schooner, and then - from 2004 - a brigandine. In 2019 the white and red flag was raised on the flagship of the unit, and Gdansk (formerly Ronneby) became the home port.

Every year Szczecin for a couple of days becomes the capital of world sailing vessels. The beautiful Waly Chrobrego promenade, located by the water, are then filled with an unforgettable sailing atmosphere, and the city shines with the white of sailor's hats and striped t-shirts of the crew members. The Tall Ships Races are races for sail training "tall ships" (sailing ships). The races are designed to encourage international friendship and training for young people in the art of sailing. The races are held annually in European waters and consists of two racing legs of several hundred nautical miles. During the final of The Tall Ships Races that shall occur for the fourth time (previously in 2007, in 2013 and in 2017) in Szczecin the largest and most beautiful sailing ships from all over the world will again inhabit Szczecin harbour. In 2021 the final of the races is planned in Szczecin on 31.07-3.08. Each subsequent Szczecin rally was bigger, more interesting and gathered more and more crowds of visitors. It promises to be no different for this year. If there is no the Tall Ship Races in a given year in Szczecin the city organizes Sail Szczecin event also with sailing ships defilade. Gdynia harbour also used to be a stop on the map of the Tall Ship Races.

The aim of Baltic Sails is the promotion of the maritime heritage of the European Baltic Sea region and supporting traditional Baltic shipping from harbour to harbour. Currently, Baltic Sail association includes: Gdansk (Poland), Klaipeda, Rostock, Karlskrona, Nysted, Riga, Szczecin (Poland). Every year there are sailing holidays organized in the ports associated with the Baltic Sail, bringing their inhabitants and tourists closer to the maritime traditions of the Baltic Sea region. The main spot for this marine celebrations is Gdansk which has a centuries-old maritime tradition and it is a perfect place for this type of event. The rally is traditionally open to all vessels, including tall sailing ships, tourist yachts, cutters and motorboats. All yachts arriving at the Rally from all over Poland and Europe moor in the marina, in the very centre of the city, at Szafarnia Street. Every year, the Gdansk marina hosts more and more vessels that perfectly fit into the architectural image of Old Gdansk. All sailing ships mooring at the Motława wharf at the Fish Market are made available to anyone who would like to learn about their history and customs prevailing at sea. Baltic Sail Gdansk is also a unique opportunity to take part in cruises around the Gdansk Bay on one of the sailing ships participating in the rally. It is an amazing event to take part in and a time when Gdansk shows the best of its maritime traditions. The next Baltic Sails in Gdansk is planned for 13-16.08.2021.

Summing up, Poland has much to offer for sailing boats enthusiasts. Major tourist destinations for sailing lovers are Tri-city area (Gdansk, Sopot and Gdynia) and Szczecin harbors where tourist can expect sailing events on a grand scale. It is also an interesting experience to spot Polish tall ships in these cities. If any of the above mentioned vessels caught your interests or any of the sailing events influenced your imagination contact ITS DMC Poland. Our professional group coordinators will help you to organize a stay in Poland that will allow you to enjoy marine climate of Polish harbour cities. 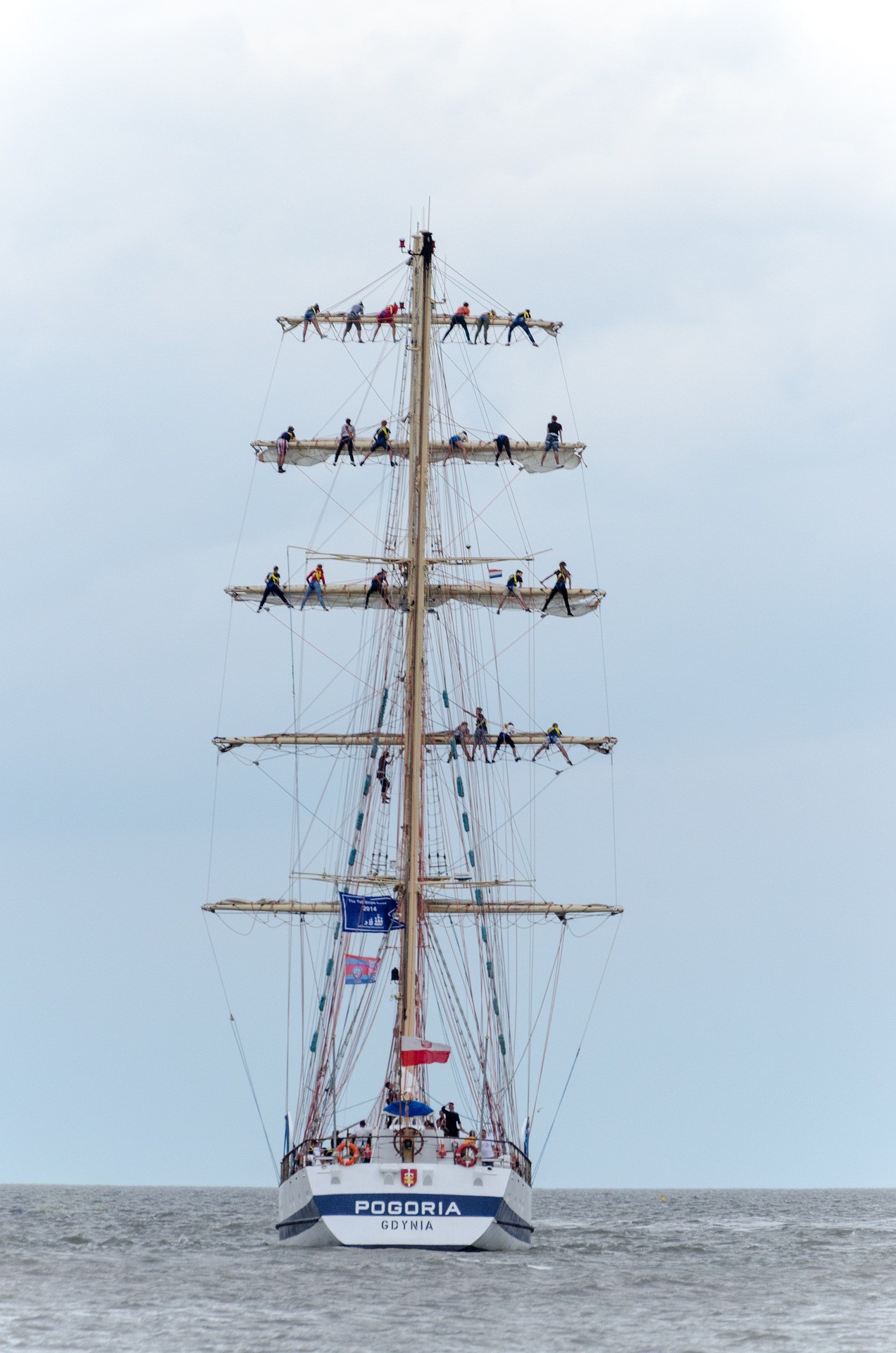